Here is a rare and beautiful car!

Cowboy film star Tom Mix had a custom-built Cord 812 Phaeton built for himself in 1937, and the custom features of the car make it even more rare than other Cords of that era. It was apparently completely rebuilt, as he died in an accident in this car in 1940.

Anyway…feast your eyes on this truly beautiful classic car! 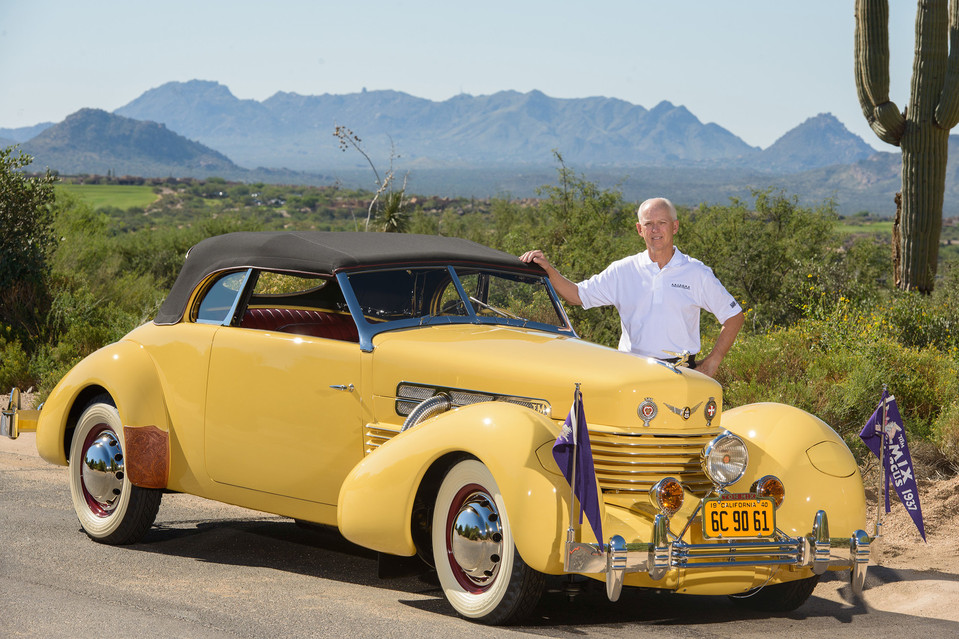 Source: WSJ From WSJ: Mix became a star of Hollywood’s silent-movie era, and he owned his own circus. In 1937, he bought a Cord 812 (the color was called “cigarette cream”) and turned it into an embodiment of his persona. It had a gun holster, a...

Those were beautiful cars.

Was there a vacuum assist on the shift linkage?

IIRC, Cords had a vacuum-operated “pre-selector”.
While driving, you “pre-selected” the next gear and simply operating the clutch then did the shifting for you.

Makes one “afraid” to drive it. I’m turning my Kubota over to Jay Leno when I pass away. 90 years from now it will draw the same raves.

Looks like the front has been lowered…odd. Also odd that, as shown, the speedo is saying “RIP.”

That extreme “rake” is definitely unusual.
Cords did not normally have that low front/high rear as they came from the factory.

As to the speedometer, it actually says “Trip” above the trip odometer.

The speedometer photo also demonstrates that the optimistic 150mph speedometers of today are nothing new. The Auburn Boat Tail Speedsters of that era which were a close relative of the Cord were guaranteed to go 100mph and had a dash plaque displaying their official test speed. The photos I’ve seen are about 102mph. I doubt if any Cords exceeded that speed.

Fabulous, but illegal. The pistol has to be unloaded and in a locked container. How times have changed.

“…it actually says “Trip” above the trip odometer.”

“The photos I’ve seen are about 102mph. I doubt if any Cords exceeded that speed.”

…especially given their propensity for overheating…

jtsanders Vehicle firearm laws vary widely state to state. In my state Tom’s handgun would be legal as the law requires it to be clearly visible. Many of these different requirements were addressed in the vehicle fire arms laws from state to state thread.

A beautiful car and worth a small fortune to boot. The former AMC dealer here opened up a small car lot after the demise of AMC and he had a personal 1937 Cord in roughly that same color.

It was kept on the showroom but not as a museum piece. He would drag it out every few weeks and commute around town with it; and probably praying a little bit that some yokel wouldn’t plow into it with an old pickup…

Forty years ago while driving west across Texas a “Coffin” Cord passed me, It seemed to be original as the convertible top was ragged and the paint was faded and the chrome was rusty but it was moving right along with an attractive lady driving. What would a well worn original Cord be worth today? So many great old cars have been ‘street rodded’ and have little remaining of the original car other than the shell. They are more like NASCAR racers.

My most vivid recollection of seeing an “original” classic car dates back to the early '90s, when I was driving on an interstate highway in central Washington state. I was cruising at ~70-75 mph when I saw the unmistakable outline of a touring car from the '20s on the horizon. It took me about 4 or 5 minutes before I could close the gap enough to get up close for a good look, and what I saw was…amazing.

It was a Pierce-Arrow open touring car, with the paint mostly rubbed-off from years of wear & tear, and it was being driven–at ~60 mph–by an extremely elderly man, with an equally elderly woman sitting next to him in the front passenger seat. The rush of air in this open car driving at high speed seemed to bother them not at all, as they looked very relaxed when I passed them. In truth, it just looked like they were…out for a drive.

In my imagination, I came up with the scenario of these folks having bought the car when it was new, and just…driving it…ever since. That may not be the case, but it sure looked like it.

Those Pierce-Arrows were so over-built, and were so much more advanced and so much more powerful than other cars of that era, that it wasn’t too surprising for it to have survived, but to see a couple of very elderly people driving that HUGE old car at a fairly normal highway speed was unexpected and totally unforgettable.

In the late 60s I was test driving a Triumph with the top down and an old car pulled up behind me at a light and honked. I pulled over and the driver introduced himself and said he was interested in the sports car so I took him for a ride and in return he took me for a ride in his 1927 Chrysler rumble seat convertible similar to this

I follwed him to his home where he had an air cooled Franklin and a Packard town car. The man’s name was ironically Henry Dodge and he enjoyed collecting the cars that he had wanted when he was young and having them restored to like new condition.

And FWIW, on that Chrysler there was a pedal in the driver’s seat base that when depressed opened the exhaust cutout to give more power for passing and climbing hills.

“on that Chrysler there was a pedal in the driver’s seat base that when depressed opened the exhaust cutout to give more power for passing and climbing hills.”

One of my father’s recollections from his adolescence was the night that he “borrowed” his father’s circa 1920 National Touring Car, and opened the exhaust cutout while he tooled around in that car.

His father had bought the car after National won the Indy 500, and it was indeed an advanced car for the day, complete with ball bearings supporting the crankshaft, but his father was…NOT happy about this incident, and the chauffeur was disciplined for leaving the keys where my father was able to access them.

Rod Knox Decent classics in original unrestored condition are now commanding a large premium because they are so rare. The “street rodded” classics normally have modern steering, drive train, suspension, and brakes. If I wanted a classic to look at I would choose original. If I wanted to drive it I would choose updated. NASCAR racers have not had original body shells, drivetrain, or suspension for decades. When I lived in Southern California in the mid 1970s I was fortunate to be able to attend many top tier races. I was in hog heaven. NASCAR, USAC (Indy Car), and National drag races. And spectator admission was quite reasonable. $8 to $12. The NASCAR Riverside 500 was a complete weekend (Friday night to Sunday evening) for $12!

Thought some of you might get a kick out of this one. It was manufactured locally back in the day and is the only one known to exist. The plant, before it burned to the ground, used to be located on the site of the housing addition where my mother in law lives. The car was found in a field in KS with a tree growing through it before going through a restoration by a local car club. It’s a fixture during the local parades.
Twelve hundred dollars was a lot of money back in about 1915 or so… @sgtrock21, I read and participated the the thread you mentioned. That sparked my interest when I saw the Cali license plate. I looked up current California law, and discovered that carrying a hand gun in this matter is no longer possible.

Maybe its a Roy Rogers cap gun now to meet Cali’s requirements. I used to have a couple that looked like that. He must have been left handed anyway by the location of the holster.