I own a jeep wrangler with a 7.2 hemi engine. Manual transmission. When driving and want to stop on a traffic light. The rpm will stay at 2000 rpm until complete stop and then it goes down to 850 rpm.

One more thing, when in stop and I press the clutch the rpm increases too.
Thesent issues are not permeates it

@busalem, I think spellcheck garbled the last sentence of your second post.

So while slowing down with the clutch engaged the RPMs stay at 2000 ? Despite the speed? Just before a stop they are still at 2000 ? Then you push the clutch in (disengage it) and the RPM’s drop?

And in your second post you say the RPMs increase when you push the clutch in… which is it?

That doesn’t make any sense. Try again to explain this.

And what is “permeates it” ?

Check the carburetor linkage for a throttle kicker solenoid. What you describe is similar to the engine management hardware on some vehicles in the late 60s until the late 80s and look like this 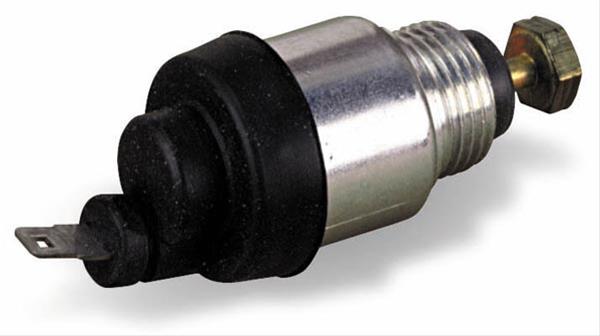 Find Holley Universal Throttle Solenoids 46-74 and get Free Shipping on Orders Over $99 at Summit Racing! If you're A/C is bogging down your motor Holley fast idle (or idle stop) solenoids can help your engine's idling performance. When your engine...

They were often used to increase idle speed when the AC was on but sometimes they would actuate to keep the RPMs high any time the clutch was engaged.

@BillRussell @jtsanders while driving and want to stop on a traffic light, I shift the transmission to manual and use the breaks. The speed will drop and rpm will drop as well, until it reaches 2 rpm it will hold until complete stop then drop down to normal. While in idle rpm is 850 rpm and transmission in in neutral, if I engage clutch the rpm will increase to 2000 rpm (transmission is still in neutral) without moving. These issues do not happen permenantly, it happens on and off.

What year is the wrangler? Is it the factory installed motor?

The 426 Hemi was a very rare option in Wranglers @Uncle Turbo.

The OP might improve his chance of successfully finding the cause of his problem if he were to give some specifics on his engine.

I own a jeep wrangler with a 7.2 hemi engine.

^
The weight distribution that vehicle must produce handling that is…interesting…especially considering its high center of gravity.

How long have you owned the car? Has it always behaved this way? I’m betting that it’s normal, if you shift lots of late model cars into neutral and coast to a stop the ECM will hold the idle at some fast-idle speed.

Very rare indeed, a 440 Hemi was never a production engine. That doesn’t stop someone from building one, but Chrysler never offered one.

@JayWB it was recently installed, still in the stage of tuning the engine. With this phenomena wad trying to see if it is normal or it requires additional tuning. I would also agree to what u said, but why it doesn’t happen continously ?!

OK - not a stock engine. It would really help to know if you are running a carb or FI? If a carb, make, cfs, header, type of fuel pump? We’ve got nothing really to go with to narrow down the possibles and come up with a diagnosis. Does this motor need to meet emission requirements to pass any state inspections?

Is this an Arlington engine based on the 3rd generation Hemi? If so I would be contacting Arlington for Advice.

What year is your Jeep? Is it carb’ed or fuel injected?

When my carb’d Ford 302 V8 springs a vacuum leak, one of the symptoms is very similar to this. It doesn’t idle down quickly when I take my foot of the pedal, instead it sort of gradually idles down. Very annoying. The more noticeable symptom tho – if it has the vacuum leak problem – is when I step on the gas, it will sort of issue a “gulp”, and a hesitation, before picking up speed. If you have either of these symptoms OP, suggest to check for vacuum leaks.

@oldtimer 11 yes it is. Arrington engine.

@oldtimer 11 it’s fuel injection engine. All vaccum connections were checked coolest level and bubble checked.
Breaks and steering pump roo.
I have noticed something too, that while shifting specially from 3 to 4, the rpm doesn’t drop the moment u engage the clutch for shift. It will stay at let’s say 3000 rpm.

@oldtimer11yes it is arrington engine