Hello again everyone. I’m back with more questions and this time it’s about electrics. Since I’ve been driving more I’ve found a new problem. After having the headlights on for more than probably 20 minutes, they start flickering. Not dimming but straight up on and off. The only way I was able to sort of keep them on to get home was by turning them on and off using both the lights and dimmer switch. This would keep the flickering at bay for a little bit.

I tried to search this online but lots of people suggested something with alternator and voltage but I’m pretty confident it’s not that because no other lights dim and music never gets any but quieter. Also like I said it’s not getting dim it just goes completely off and on, even when the engine is off. I have a hunch that this little piece has something to do with it but I don’t really know what it is since it doesn’t look like a typical headlight dimmer switch and I’m unsure what else it would be 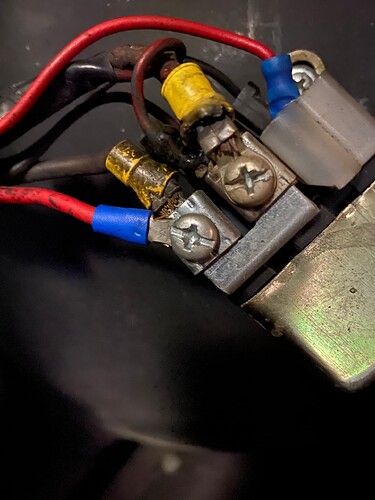 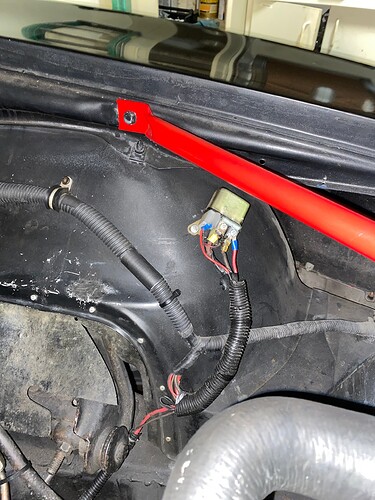 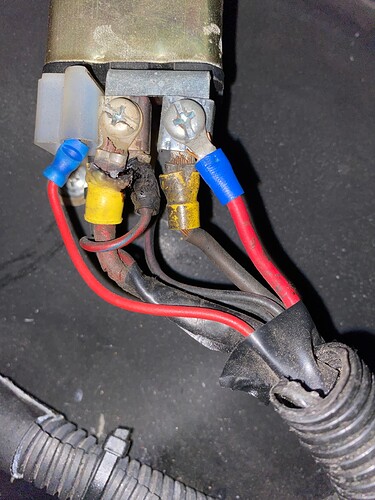 It might be kind of hard to see but one wire started to get a bit melty after a long night drive. Could anyone tell me what this is or what else may be the problem?

Also thank you to everyone who helped me with the brakes. I’ve been able to drive it a ton now and finally reach the break in mileage for the tkx. I’m glad to be having problems that don’t make the car inoperable for once.

I would disconnect the battery, and not drive the car until it’s figured out what’s causing those connections to overheat.

Yeah I’ve actually just gotten into the habit of always disconnecting the battery even when there’s no problem because I’m so paranoid. At least it’s only happening when the lights are on. But you’re probably right, I’ll hold off on driving it.

Your picture is a relay likely the headlight relay. Search automotive relays on google and learn about how they work. This relay may be failing.

They use low current to switch high current for the headlights. These are not factory wire terminations, they are an old repair loaded with corrosion. The corrosion causes resistance and the resistance raises current. Increased current may cause the wires to burn.

That’s a GM horn relay, no idea what the extra wires are on it.

Someone may have rigged it to be a headlight relay, but I doubt it.

Your headlight switch has a built in circuit breaker, your symptoms sounds like that’s what is tripping.

Are you running stock headlights ?
Your 68 should be incandescent sealed beams, if you’re running halogen sealed beams you might be drawing to many amps.

My guess is your headlight switch is shot and needs replaced.

I’m using factory headlights but I actually have led lights sitting around. I never put them in because they required a bit more work than just throwing them in and other things just got in the way. Would it help to put those in? If so do I need a different relay?

Leds would complicate things at this point. First off, determine if that IS the headlight relay. You will need a volt and ohm meter to determine that. Start by putting your finger on it while you turn the lights on…you should hear and or feel a tick.

Doing a Google search for 1968 Firebird engine bays that relay looks nothing remotely like the original GM part so if that thing actually is the headlight relay, first do yourself a favor and replace it. (No sense saving $100 on a “kludge fix” that keeps a $10,000 car from running).

And while you’re doing that, you’ll clean and replace the fittings to avoid the corrosion that’s melting your attachments and possibly the insulation on wires within your wireing harness, thus saving you hours of future grief. .

No experience w/you car or its wiring configuration. But if I had signs of overheating wiring insulation like that first thing I’d do (after reviewing the car’s wiring diagrams so I knew what those wires were for) is remove all the wires from the terminals (I’d sketch it out first and take some photos too so I know where the wires go), then I’d clean all the connections so they look bright and shiny, then reconnect, test how it works then. If you’ve never done anything like that, best to ask somebody who had to do it for you, or at least help you. If done incorrectly, could result in a car fire which destroys your car. One time my truck caught on fire b/c of an electrical over-current problem. Fortunately I was there when it happened, and knew how to stop it.

This car is 1968 technology, there are no fuses or relays for the headlights, just the circuit breaker in the switch. 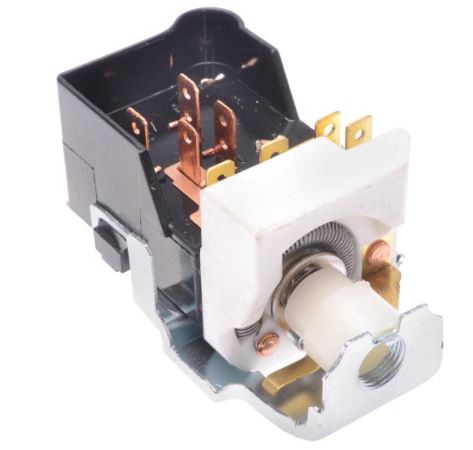 The relay pictured in the OP is a horn relay 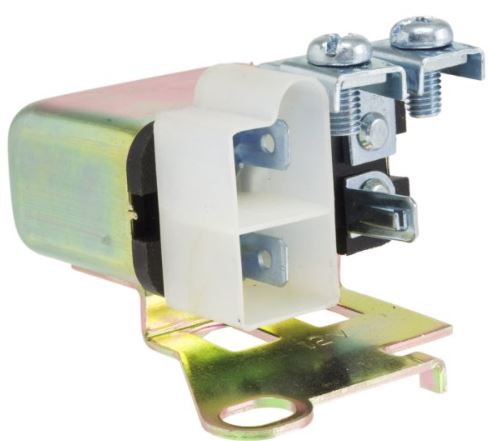 Exacly, so if you’re using what was a “quick fix” repair instead of the proper repair you could find yourself hundreds of dollars underground.

Ok so I think what’s getting melty is the horn relay which is also a problem. The wiring diagrams show the headlight wiring for the most part just goes straight to the switch inside the dash. The horn relay seems to have power at all times when the battery is connected I don’t know if that’s good or bad but I’ll probably start with cleaning all the connections or replacing them and I guess I might have to pull apart the dash.

That is a horn relay but with too many wires, someone has added wires or modified the use of that relay.

The factory wiring for the horn relay has three wires; black, black and black/pink.

For whatever those wire lead to, the crimps are loose on the connectors. Those connector ends must be replaced. Wiring must be clean before installing new connectors, preferably soldered.

Well it can’t be that bad of an idea, almost all cars (I’d guess 99.9%) have the horns powered at all times. So are the brake lights, emergency flashers, headlights, interior lights and probably more things.