The car doesn’t start very quick and it needs to be cranked a lot. Things I know, battery is good, alternator is good, starter is good. Putting in new spark plugs didn’t change anything. If I give it four quick pumps on the gas before trying to start it’ll usually start right away. I have no problems with the car running once it starts. My mileage hasn’t dropped. I don’t have any issues with rough idling or stalling. Once started all seems good.

I’m thinking maybe a fuel filter or pump but it doesn’t seem to fit. Any thoughts on what to check or do or what you think the issue might be.

Repeat this a half dozen times and then try starting the engine.

If the engine starts right up, it points to a problem with the anti drain-back valve on the fuel pump.

The “key dance” Tester suggests is where I would start, too. Each time you turn the key to On, the fuel pump should run for a couple seconds. You may hear it. Each Off and On cycle makes it run some more. That brings fuel and fuel pressure right up to the engine. When you finally turn the key to Start, the engine has fuel and good fuel pressure. If that’s what it needed, it will now start right up and run just fine.

I have had this happen on my 1999 Honda Civic, especially when the fuel level in the tank is low. Knowing the effectiveness of the key dance, I have not replaced the fuel pump.

There was a TSB for hard starting.
The fix involved re-programming the PCM.
(I used to have a 2006 Matrix.)

I tried to see if I could hear the fuel pump but I couldn’t. I don’t think I could ever hear it.

I turned the ignition on but didn’t use the starter, waited a few seconds then turned it off. I did this about five times then tried to start and it still didn’t start like it should.

It seems like the only way to get it to start is to pump the gas pedal several times before trying to start. This seems to work.

Still unsure if it’s the pump or filter or possibley the PCM. I would think if the PCM was the issue I would have been already having the issue. Not sure. Any info on how to check and how to fix if it’s the issue?

When you step on the gas while trying to start it,it tells the computer you’re in a flooded mode.

Next time, hold the gas pedal to the floor when trying to start it.

I tried holding down the gas when starting. It still cranks longer than it should, 10 or 12 turns, and when it finally starts it’s racing so I quickly let off the gas. So far the best method to start is pump the gas four times before putting the key in. It usually starts right up.

On a side note, I do not have a check engine light on or any error codes.

the best method to start is pump the gas four times before [cranking the engine, or even inserting key in ignition]

That’s a puzzling symptom. I don’t recall that one reported here before now. hmmmm … the only other thing I can think of (besides good ideas above) is a problem with the evap system. The purge valve for example may not be working correctly, allowing gas fumes from the canister to build up in the intake manifold or throttle body when the engine is off. Usually the drive train computer would notice this, and produce a check engine light. Ask shop if there’s a simple way to block path from purge valve to engine temporarily, see if that helps.

hmmm … what else? Just wild guesses, but maybe cranking mixture is too rich b/c computer thinks engine coolant or ambient temperature is lower than it actually is. OBD II scan tool would be easiest way to determine if this is the cause. If nothing found there, might be a good idea to ask your shop to measure the fuel trim data.

As posted above, the usual reason for longer than normal cranks before the engine starts is the fuel rail pressure has leaked down too much, either from a fuel pump check valve problem or from a leaking fuel injector. So those ideas should remain in the mix. But that problem would usually be mitigated if you held the gas pedal to the floor when starting and you say this didn’t help. You have a true mystery on your hands at this point.

Your car has fuel injection. Pumping the gas does nothing with key removed. Holding gas 1/2 down as you crank richens mixture. Holding pedal to floor while cranking lessens mixture. I’d clean inside of throttlebore as a start. 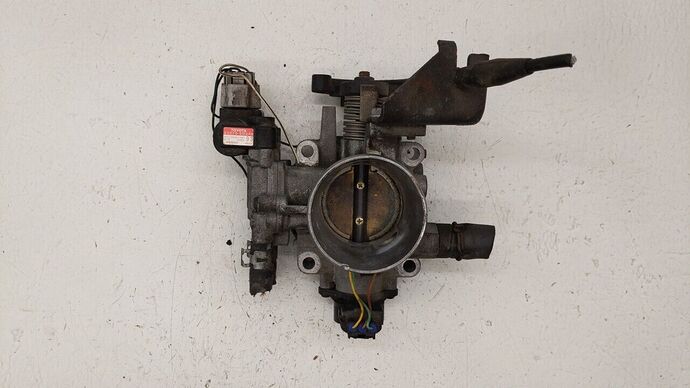 Pumping the gas does nothing with key removed.

If cable operated throttle, pumping gas pedal w/key removed still opens and closes the throttle valve (as seen in the photo above), which would allow the throttle body chamber and intake manifold chamber to equalize.

Try pushing down the gas pedal just slightly when try to start the car.

If the engine starts right up, it points to a problem with the idle air control valve. 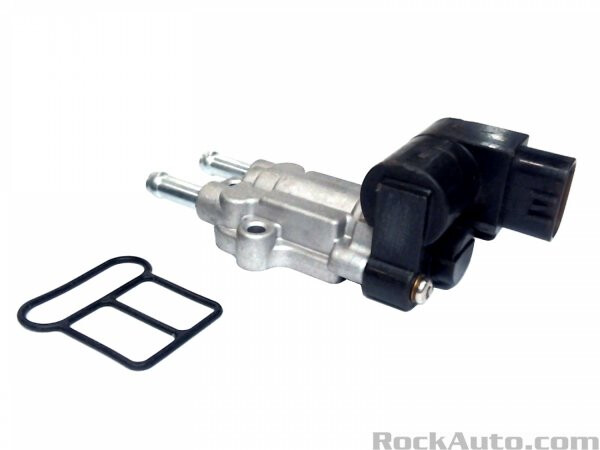 There was a TSB for hard starting.
The fix involved re-programming the PCM.
(I used to have a 2006 Matrix.)

I tried pushing the peddle half way when turning the car over. Seemed to help but not always.

I have an ODBC2 blue tooth and i use Torque Lite. I have a pending code P0420.

Try to help some people.

A clogged cat could definitely make engine hard to start. Ask shop if it is possible to temporarily remove pre-cat O2 sensor, allowing exhaust gas another path to escape, testing if that has any effect on the hard to start problem.

A clogged cat could definitely make engine hard to start.

I have no problems with the car running once it starts.

Aha, it’s not exactly like I said? Everyone is assuming EVERY component on car is working at 100% perfection. Partially clogged cat? Weak fuel pump? Wonky coolant temp sensor? Minor vac leak in 1/2 dozen hoses? Carboned up egr valve? This is not a perfect, new motor.

I just want on a small road trip, 200 miles or so. I didn’t think the clogged catalytic converter was the issue as my gas mileage never went down which I believe it that was the issue it would have. I got 38.1 mpg on this road trip.

However, I did have two error codes pop up. P0441 and P0446. When looked up they indicate a bad purge valve. Interestingly enough, I replaced the purge valve a year ago to pass emissions. I really wasn’t thinking it would only last a year. Just pulled up the receipt, Adavnce part number CPA1068.

Could anyone verify if these codes could mean anything else? I’m going to replace and see if it makes a difference. I reached underneath and snapped a couple of pictures. Still attached and looked like everything was good. Only reason I checked this is I had to mount it differently then it was originally because of the rust.

Any thoughts or comments would be appreciated. Really want to have some verification the purge valve is the issue before a crawl underneath to replace. It was tricky to very the old one not working using a transistor 9 volt battery and meter.

Those codes mean the car’s computer is having difficulty verifying the purge and vent valves are opening and closing when they should, and that the flow of gasoline-fumes through the purge valve isn’t the correct amount. I think the way it tells the amount of purge flow is by measuring the pressure of the evap system contents, sort of like the pressure inside a balloon. When the purge valve opens the pressure should go down a certain number of psi per minute, and that apparently isn’t happening. Could be caused by pressure sensor problem, rather than purge valve fault. In your case I’m guessing the problem is the vent valve.: i.e. it’s leaking (sort of like a leak in the same balloon) and preventing the evap system from holding pressure.

That’s just a guess though. Suggest your best bet is to let shop use their pro scan tool to fully diagnose the problem & tell you which part is causing the fault codes, then you can replace the part yourself if you like.

Seems that evap system problems like this are running head to head in a competition for the most problematic car function with fails-to-crank problems by posts here.

I replaced the “Vapor Can Vent Solenoid” before going on a 2,000 mile road trip. I’m no longer getting any P0441 or P0446 codes, they are gone. I’m still having the hard to start issues. I did get a code P0420. I think this is related to a small exhaust leak by the catalytic converter. Could this cause the hard to start issue?

Other than being hard to start I didn’t have any issues with how the car was running. It ran fine, wasn’t sluggish and the gas mileage was OK.

Thanks for the help and advice,
Dave