Grooves on pistons and head tolerance?

I’ve never done this before… I’m not a mechanic.

I suspected a head gasket leak being the cause of an overheat. I didn’t let it get hotter than 95% of the white range on the temp gauge but it never got to full red. (a narrow band at the top). Car ran fine the whole time except that when it got the hottest, I did smell something overheated (plastic?). In any case, I took the head off and found what appears to be a blown head gasket. The port-side piston (#1?) has more oil gunk on it. I didn’t see any ‘mayonaise’ anywhere… just charred oil. Besides the overheating, the only other clue was slight bubbling from the radiator and a slightly dirty coolant overflight reservoir interior. Oil all looked good.

I found a few areas of the head where I could slide a .0015 in / .038 mm feeler while using an expensive straightedge. In a few areas, Iwas able to PARTIALLY slide .002in/.051mm feeler but never all the way through to the other side of the straightedge. Does the head need resurfacing?

Also, the 4 pistons appear to have dents only at the sides farthest from the front of the car. The dents appear to be aligned with the valves, but I’m not sure. Is this bad? Could I have caused this by cranking it by hand clockwise a few degrees? (I might have bumped it a few degrees the wrong way) I moved it counterclockwise trying to find TDC.

Pics of the piston grooves:

Those “dents” are valve relief cuts, which are supposed to be there. Also, any time you pull the head for any reason, you have it checked and resurfaced by a professional machine shop, or you replace it. The last time I did this procedure on an engine which had overheated, I purchased a used head from a “you pull it” junkyard and had a machine shop install new valve stem seals, polish the valves and valve seats, and resurface the mating surface. I paid about $350 for the machine shop work.

Yep they machine the head to make it flat and magna flux it to check for cracks. I’m not a mechanic either but paid for one.

Good news on the head then. The head is being resurfaced tomorrow.

How should I clean the pistons of all that carbon? There’s some gritty material in there.

How should I clean the pistons of all that carbon? There’s some gritty material in there.

Use nothing more abrasive than a quality paper towel (e.g. Bounty or better yet, Scott’s Shop Towels) soaked with carburetor cleaner. Do not attempt to use any sandpaper, sandcloth, scouring brush, etc. That would result in abrasive material getting down into the piston rings and chewing up the cylinder walls. Also, this is an open-deck aluminum engine block–there is not much material to seal the perimeter of each cylinder from the water jacket, so even small scratches in that area can cause a leak.

I think that you should have run a dry/wet compression test before disassembly. Overheating will have an effect on cylinder walls, piston ring seizures, or rings losing their temper. That does not mean an irate emotional state; just that they can lose their spring tension and not seat properly.

With that much carbon buildup on the piston tops it does make one wonder if oil is getting past the rings. The horses left the barn now but if it were me first thing I’d do once back together is run a dry/wet compression test just to get an idea if there is ring trouble brewing.

Just an FYI, but anytime a head has less than .002 of warp it can be reused. The head bolts will flatten it back out although surfacing will certainly not hurt. And anytime I’ve done a head gasket job it always gets a new thermostat unless it’'s proven that it was replaced just last week.

I would advise checking for valve leaks before installing the head. Or better yet have the shop do a complete valve job after machining it.

Could the oil have burned on the pistons from some other source other than ring leaks?

Well, the head shop said that the any warpage is below tolerances for resurfacing the head. He told me just to clean everything with soapy water. He said it just needs a new head gasket. I took him the head, the camshaft, valve train, and gasket and he inspected it all. This is the same guy the local Honda dealerships use for all their work. Do I trust his word?

The carbon on the piston is normal, the dents are not. Those are not valve reliefs, those are from valve contact. The dents appear to be covered with carbon so it may have occurred in the past and repaired.

Check the valves for leaks before installing the cylinder head.

Do you trust his word? You went to him, so yes. He’s being straight with you and not running up a bill. You should show the machine shop guy the photos of the pistons and ask him about the relief cuts, but they sure look like they were made that way. And you could use a shop vac and a small stiff bristle brush (NOT wire) to get out as many crumbs as you can.

I’m sure the posts that counsel you to tear things down and check the rings and so forth are technically correct, but that’s for you to decide. To me it looks pretty normal for an engine with 115,000 miles on it and a history of a failed head gasket. If it was me then a new timing belt kit, water pump, thermostat, radiator hoses, top end gasket set, radiator pressure cap, maybe spark plugs, gentle throttle body cleaning, new air filter, coolant, oil and filter, etc. would be on the shopping list. Might as well do all that because you are in there now and you’ll be handling all those parts anyway. Put it all together, button up all the loose ends, start it up and drive yourself somewhere for a cup of coffee and a well earned gloat that you did the job.

This piston has valve reliefs; 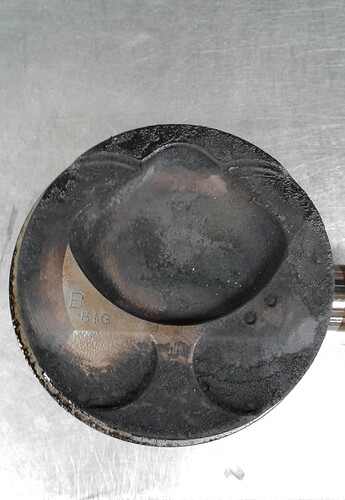 The OP’s pistons don’t look like that @Nevada_545. And a pint of kerosene and half an hours time might be well spent confirming that the valves are sealing.

Is there a zero-experience guide or video that you recommend for doing a leak test on the valves while the head is off?

Also, it looks like the pistons are designed to have those grooves in them…

Also, it looks like the pistons are designed to have those grooves in them…

New ones for your engine also have that groove, so I’d say they belong their. 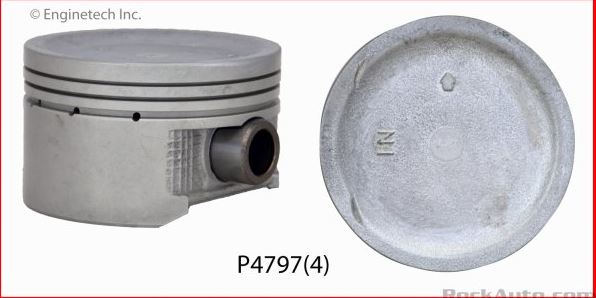 THose are the smallest valve reliefes I have ever seen.

That’s a convincing picture @It_s_Me. Whodaeverthought? I’m sure glad you found that photo and posted it.

The second photo from the OP seems to show some scuffs in the cylinder. Are they there, OP?

There’s the relief grooves on the piston head. I’m not sure if you’re referring to those or something else. The diagram, clean piston picture above, and the photos I took all seem to indicate those grooves being intentional.

I’m talking about two places on the cylinder wall, not on the piston, above the NN and above the arrow in this photo: 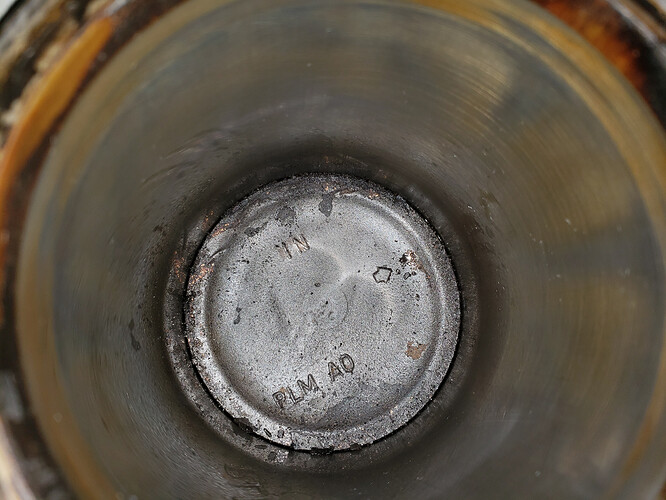