Getting Transmission Back Into Neutral?

My manual transmission got stuck in 4th because of a melted oil trough sticking between the gears. I got all the plastic out, and the dog clutches/collars are “free.” But, I don’t know how to put the gears back into neutral. When it’s reassembled, the stick doesn’t work to change the gears. How can I get the gearbox back into neutral?

It has shift forks. Its an M5R2 transmission.

Are you jacking a drive wheel up or pushing the clutch in to take any tension off the tranny before moving the collars to their mid-point? If your are, you may have missed some melted plastic.

I’m pressing in the clutch. The collarss appear to be in the middle, but still no go. The truck starts up fine, but the stick doesn’t really seem to have any effect.

Quote; The truck starts up fine, but the stick doesn’t really seem to have any effect.

Does the shifter just flop around once it’s reinstalled, or is the shifter stuck in 4th gear and just will not move out of 4th gear.

Shifter is definitely floppy, even with this installed: http://www.allstategear.com/M50D%20Shifter%20Repair%20Kit.htm

Are you sure that all the forks are properly engaged ane the shift rails properly aligned?

I’m going to give it one last check tonight that the rails are aligned, dog clutches are free, the forks are engaged, and I will take a few pictures and post them to see if I’m doing it right.

Ok, here’s 3 photos. The shift forks definitely look a bit worn, but worn enough that they wouldn’t shift it? And the dog clutches/collars look free, right? I can wiggle them back and forth a little bit. 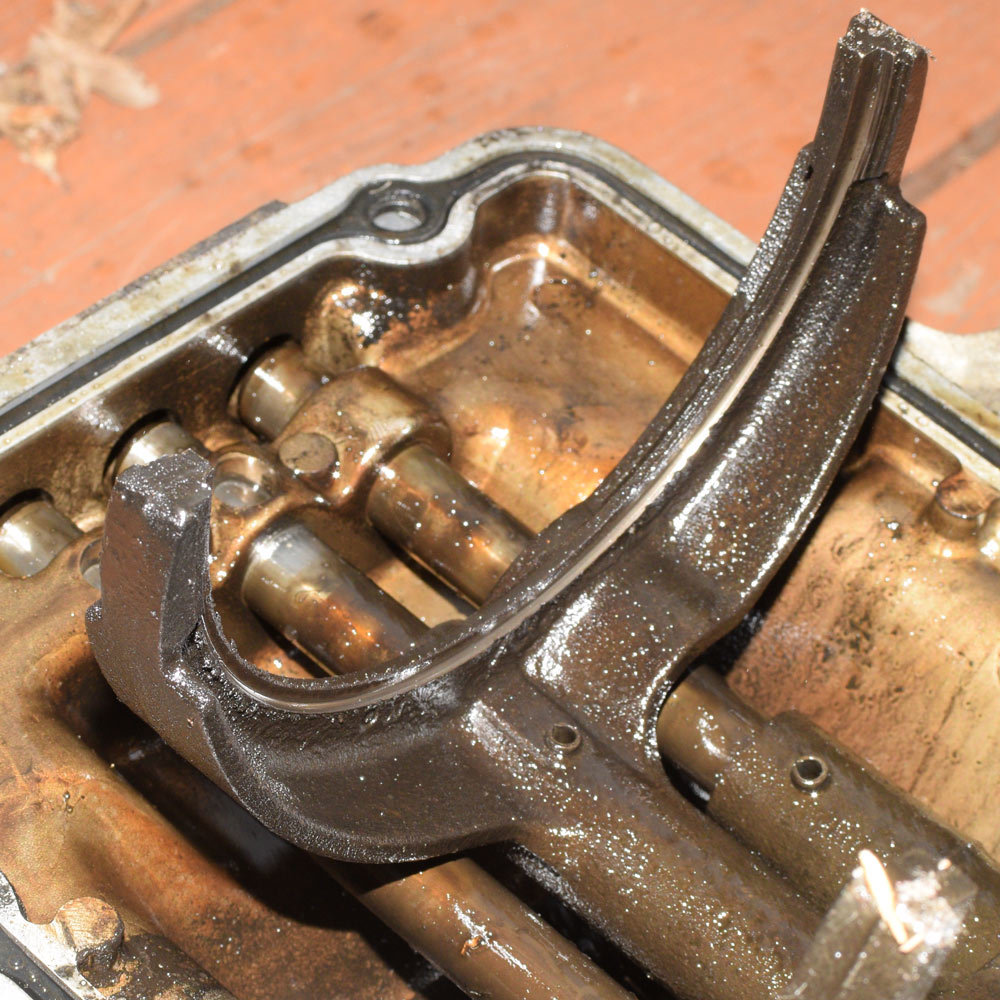 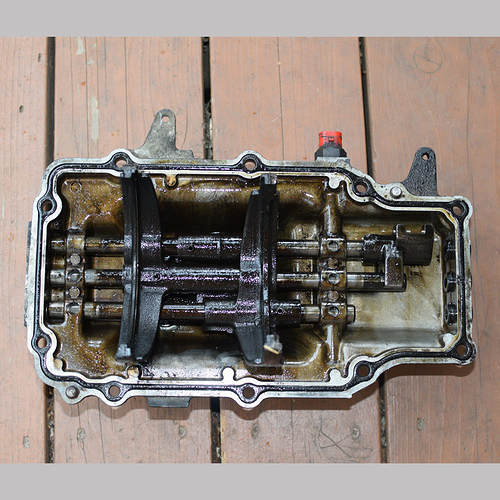 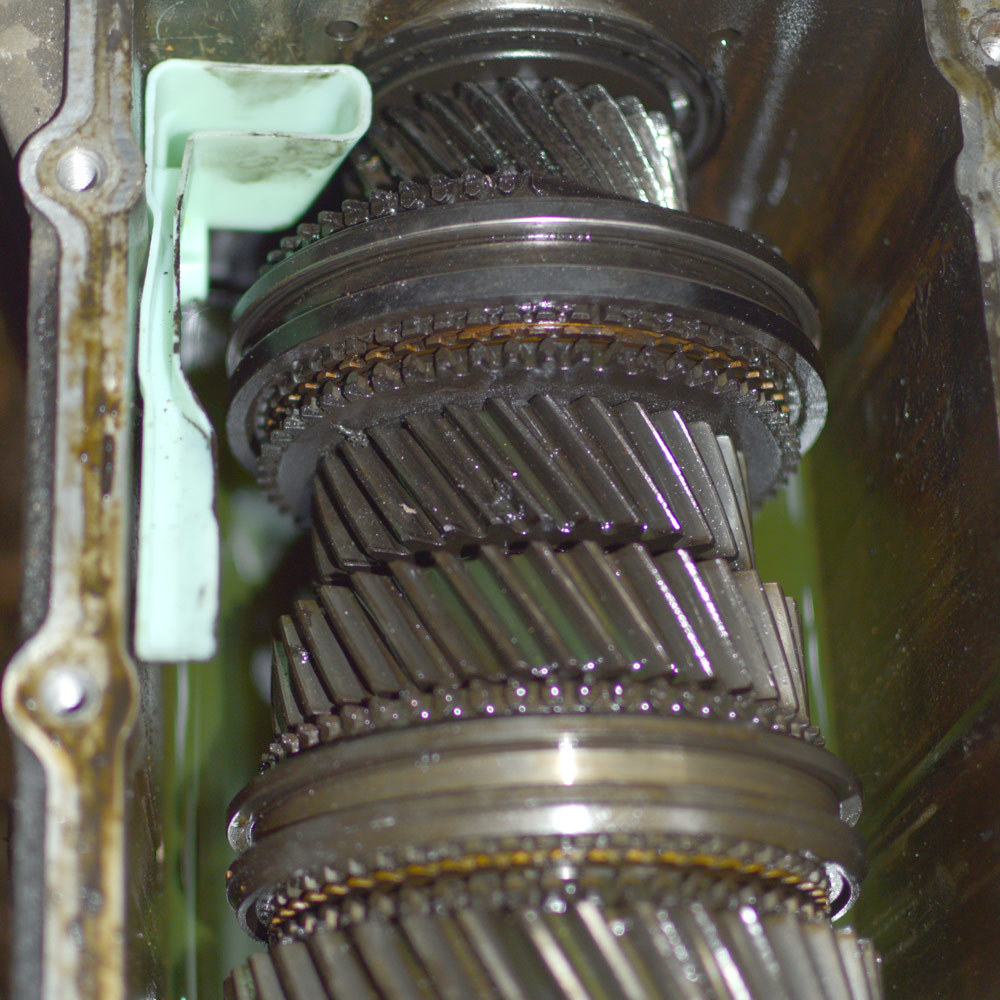 The metal flakes are troubling. And it appears to be in neutral on the 3-4 hub and the R-OD hub but the 1-2 fork seems to be off center toward 1st. Get a view of the shift gate and consider flushing out the debris before putting the truck back on the road.

I;m not familiar with your tranny but everyone that I’ve taken out… when putting the shifter back onto the tranny top, you can’t just flop it on there. The shifter shaft that goes into the tranny must be lined up properly.
Weather it has a ball on the shaft that needs to mesh with a socket…or another type, both parts need to mesh as you lower the shaft into the tranny.

There may be problems remaining w/the internal workings, but it seems like you should at least be able to get it to go into neutral, provided the two halves meet correctly. You say you can wiggle the shift forks a bit. I presume you mean when it is taken apart, like in photos 1 and 2. What do you mean by that, explain more? How freely do they move, and over what extent of travel? Is it possible the tranny is actually ok, but the problem is the mechanism that links the shift lever to the arms (the c-shaped gadgets) is out of kilter.

That has to be one of the dirtiest MTs I have ever seen that wasn’t destroyed. IMO you’re wasting your time fixing it if you put it back together with all that debris in there…

The dog clutches are able to wiggle, which is supposed to mean that they’re not engaged in 1st, 2nd, 3rd or 4th. The shift forks will move forward and backwards if I place the shifter stub and stick into the top, and “pretend” shift. Meaning, I can see the shift forks moving back and forth without putting the top of the gearbox back in. So, they’re definitely moving.

Oh, and I know the tranny has debris. It’s that plastic oil trough. The other one burnt up and proceeded to fly around the gearbox. Now, why in gods name would Ford design a transmission with a large piece of plastic in it? They need a dope slap!

I repeat, is part of the 4th gear dog ring sheared off?