Getting Transmission Back Into Neutral?

Replace the xmission? I don’t see any obvious signs of problems with the gear teeth. So that debris may just be bits of plastic from the disintegrated plastic part as mentioned above. Plus I think it is great the OP is not afraid to fix their own transmission. Giving it the old diy’er college try has a lot of merit.

While the xmission is on the bench , which I’m assuming it is, then OP might as well clean all that stuff out while it is easy to do. I can’t tell much about the condition of the synchos from the photos. OP, are you able to determine if the syncro’s look ok too?

Also suggest to address @insightful 's query. It does sort of look like the left side of that ring (just above the upper right corner of the blue plastic in photo 3) might be damaged.

I too would like to have @insightful 's question answered.
It does look like those dogs are sheared off…or is that an optical illusion.

A good picture of those dogs would be nice.

The dog is not sheared off and it’s not an optical illusion. the input shaft is milled off to allow it to clear the countershaft front gear which is the final step in assembling the gear box.

@insightful Didn’t even notice that until you mentioned. I’m not with the truck right now, but will report back tonight.

I’m going to try and rock the truck, make sure the dogs are fully disengaged. Do you think the top cover assembly could be messed up? What if I ordered a used one like this: http://www.ebay.com/itm/Shifter-Cover-Assembly-for-the-M5-R2-5-Speed-Manual-Transmission-/151737153788 or went to a junkyard?

All that appears wrong with the cover is the sludge and gum. If it were cleaned up and pre-lubed and there is no binding or play in the rails it would be OK. I would recommend not spending the money replacing the cover until you have determined that the hubs are operating properly and there is no metal in the debris. You may end up replacing the transmission.

So the way you know it’s “stuck in fourth” is because of the position of the shift lever when you put it back together?

I sounds like he’s saying the shifter is loose and flopping around, and that the forks aren’t engaging at all. If the tranny is in 4th now, wouldn’t he have to move the forks to the 4th gear position before he could assemble it correctly?

I apologize if my question completely misses the point, as I have not done this job myself.

@wentwest, you’re right on all counts. The 3-4 shift collar appears to be in neutral from the picture (the top one showing). I guess I just can’t come up with a way OP knows he’s in fourth unless he rotated the crankshaft and observed the drive shaft rotating at 1:1 (i.e., the same amount). OP?

If the transmission got hot enough to melt the plastic parts inside there is a problem with that transmission.

From the photos, it appears that 4/3 dog clutch and 1/2 dog clutch are in neutral. Can you see 5/Rev dog clutch? @Rod Knox mentions Rev/OD clutch sleeve but I cannot see it in the third photo. That clutch is to the rear of 1st behind the bulkhead down on the counter shaft.

It is going to be hard to distinguish 4th from 5th(OD) with the transmission still attached to the engine.

@insightful @researcher This is very possible. You may be on to something. Don’t know how I didn’t think of this! Does the 5th dog clutch/sleeve function the same way? Meaning, it needs to be in the middle position to be in neutral? And if there are only two forks moving the sleeves 1/2 and 3/4, how does it move 5/rev?

@Nevada_545 Just got this truck, and surprise, the tranny was low on oil. Pretty sure that’s how it burnt up. Plus it has seen 125,000+ miles, so stuff, especially plastic, was bound to fail pretty soon.

Yes @Nevada, there is an indication that the transmission somehow got extremely hot. I wonder if the catalyst heat shield is missing?

Regarding the operation of the Rev/OD fork, it appears that the lever going down to the rear of the transmission engages the fork moving the REV/OD clutch sleeve. You should be able to glimps that clutch sleeve by looking down toward the rear of the counter shaft. The oil level should not be covering the counter shaft gears so the sleeve should be visible.

I wish I could place eyeballs on your transmission as sliding everything around is the best way to observe its functionality.

First I’m not anything like a manual transmission expert, never even taken one apart myself, except for a small cycle-cross motorcycle one time. And I can’t see – other than via the photos provided – the actual transmission at issue here. But it looks like the gears remain in pretty good shape. If there’s some remaining hidden problems like others above have postulated, like bad bearings, syncros, etc, I suspect the OP has the moxie to remove the transmission and fix whatever remains broken. I hope so anyway, b/c this all makes for an interesting thread. 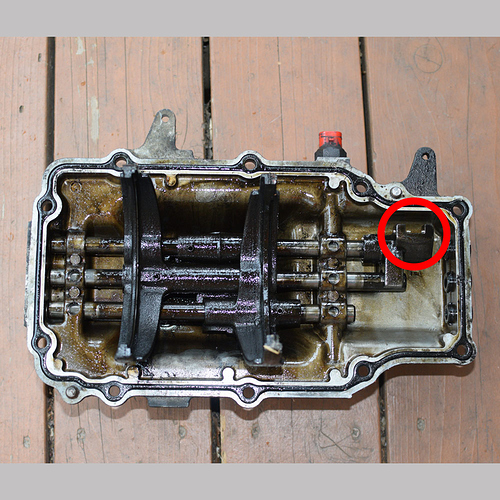 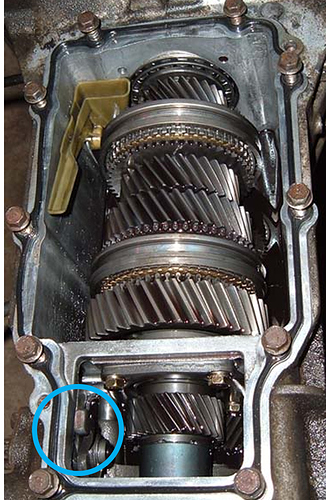 Last night I had the wife rock the truck back and forth while I pressed the clutch and tried to move the tab (blue circle) forward into neutral. As you can guess, it didn’t budge. I’m wondering if the reverse/5th fork (red circle) maybe “jumped” over the tab (blue circle), and if I line it up real pretty, I will be able to get enough force on it with the stick to move it back into neutral. I will try that tonight.

BTW does that oil collector dump oil into the front input bearing?

There are spring loaded detent pins in the rails to prevent engaging 2 gears at once and if enough force is used to over ride the detent interference the rails can be severely bound up. The R/OD linkage is in the tail piece and while I am somewhat familiar with similar transmissions I have no experience with this particular one but as has been stated by others if one of the rear wheels is off the ground and the shift collar/rail is moved in the direction to disengage whichever gear it is in it will happen but will something break in the process? Putting pressure directly on the rail itself, the rail in the tail piece that is, would seem the safest route if there is access to it.

@researcher. When I take the cover off, and put the stick in, I can go through the gears and the forks will move. When it’s on the gearbox, it’s a different story.

@“Rod Knox” & @researcher - The “high force” that may have jumped the tab was me. I explained this is an earlier post, but I don’t think in this thread. My apologies. I was at the top of the hill when the truck got bound in gear. It wasn’t moving back, forward, anywhere, even with the clutch pressed in, and I had to move it out of the intersection. I jammed the stick backward with a good amount of force, and it was free to roll back onto a side street. Probably not my brightest moment.