I bought what I thought was a Fram Tough Guard oil filter at Walmart, but when I got home, I discovered it was a Fram Extra Guard filter in a Tough Guard box. My theory is that another customer (thief) swapped out the filters so he could pay the price of an Extra Guard and get a Tough Guard. I was able to exchange the wrong filter for the one I paid for, so the story has a happy ending, even if I did have to postpone my oil change and make a second trip to the store.

This might be what happened to you if Canadian Tire has a storefront where customers have access to the merchandise. It could also be a matter of leakage (employee theft) if an employee swapped a cheap filter for a more expensive one.

Have you checked to see if the smaller filter fits on your engine? Does the filter have information on it that identifies the model number? Does it match what you ordered?

Anyway, the moral of my story is that, when I buy my air and oil filters at the store, I take them out of the box to check to make sure the packaging matches the item before I leave the store.

Someone in the thread above suggested that maybe it was just that the box was smaller, not the filter. Well, turns out they were right. Though in my defence I had to know that I had the right filter before I drained the oil and took out the old one. I had no desire to have to put the old one back in and then waste my new oil. So, all I had to go on was the box size, and, as my first post shows, the new Fram box is about two thirds the size of the one I’d kept from my last oil change. Maybe Fram should have put something like “Same filter, Smaller box” on the new box for guys like me. First clue that I had the correctly sized filter was when I picked up the NAPA equivalent yesterday. It was the same size as the “new” Fram. In the picture I’ve attached you can see the filter I’ve pulled out of the car, with the NAPA and Fram filters next to it. Have to say the Fram looks to be of more substantial construction than the NAPA. Anyway, my problem solved. New oil and filter in the car, and I’m ready to hit the highway. Thanks to everyone who took the time to offer their thoughts and opinions on this subject. 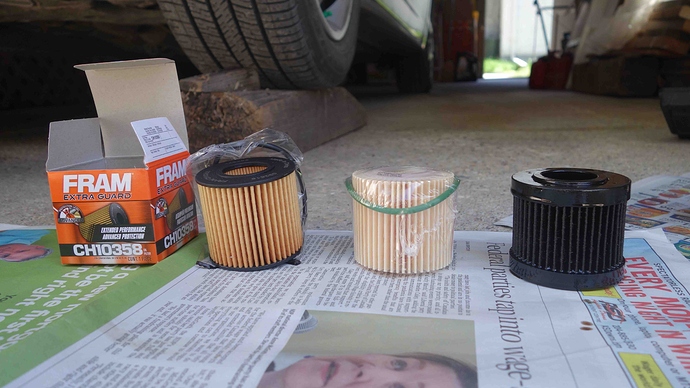 Did we ever find out the model-year of the vehicle?
Just asking for a friend.
CSA

Just a comment although I use OEM but I never change oil unless I have several filters on hand and enough oil for several changes. If I happened to get a leaker, no problem just put another new one on from the shelf. I buy the Honda ones in a six pack.

Now back to car ramps. What’s with those solid wood ramps?