There’s no engine noise, and it’s only 45 minutes long as a result of battery power limitations, but it still looks pretty exciting. 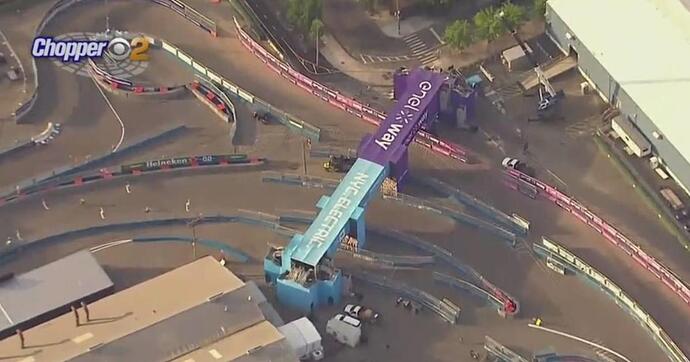 Some of the fastest cars in the world will zoom through the streets on a track in Brooklyn, but you probably won't hear a thing.

I have watched a few races on TV… You do indeed hear noises. Squealing tires and motor whine being primary.

The things they incorporate to make the race less of a parade seem a little hokey…a bit video-game like… but IndyCar’s push to pass and F1’s DRS zones and following distances are a bit hokey, too.

The short sprint race format is an issue of the battery capacity. In years past, they actually switched cars mid-race. The driver would pull in, hop out of the first car into a second, fully charged car. Buckle up and go.

Compared to combustion engine races…they are just too close to watching golf, or paint drying.

There is an electric rally sprint series running on dirt, gravel and asphalt that seems tailor-made for electric cars. Very short sprints in an elimination type of format. I haven’t caught that on TV yet.

Of course it is VERY “green” with huge diesel generators to recharge the cars between practice, qualifying and the races.

In years past, they actually switched cars mid-race. The driver would pull in, hop out of the first car into a second, fully charged car. Buckle up and go.

We had a Formula 1 race in downtown San Jose some years ago. Sounds from the cars were great, but otherwise not overly impressed. Cars just couldn’t get going very fast b/c of all the sharp corners in a downtown area. Dog liked it the most, barking at the car noises … lol …

No, it didn’t take less time than fueling and changing 4 tires on an Indycar. A good stop is 8 to 10 seconds!

NASCAR does the same in about 12 seconds.

Formula E mandated a 45 second minimum time so the driver would not rush being belted in for safety.

They also are also slower because they are essentually using treaded hard compound tires, like street car tires, not soft racing slicks.

I tried to watch a few of their early races, and just couldn’t get into it. The “Fan Boost” gimmick was embarrassing, and the cars didn’t seem all that fast either, certainly not compared to Indycar or F1. The street circuits seemed to be comparatively compact without much in the way of straightaways. And yeah, the changing cars mid-race thing was off-putting. Interesting concept, lackluster execution.

I watched one. It was like watching electric forklifts race. Completely boring. I used to drive forklifts, the electric ones are even boring to drive and the gasoline powered ones could do more work faster.