First by far with a post-war car! 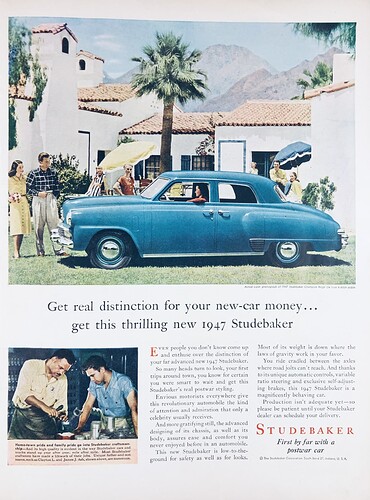 Studebaker sales really took off in 1950 when they started giving hefty discounts to teachers. It’s a shame they spent so much money developing their own automatic transmission instead of simply buying them from GM or Borg-Warner. They could have better used that money on flashy styling or more quickly developing a V-8.

But, they lost-out on a bounty of cash by refusing to license the rights to that transmission to Ford, which offered them a LOT of money for the right to manufacture it. When Studebaker refused, then Ford had to rapidly develop their own automatic transmission. That was just one incident in a long history of bad business decisions which finally sank Studebaker.

It was interesting going through the museum in south bend. My godfather always bought Studebaker and had both car and truck. From what I remember the rode pretty well and were solid cars. Ended up with a Plymouth in 58. Quite a change in stying and performance. Family friends from Wisconsin always bought ramblers too. I think they were made in Kenosha and that’s why.

Easy to see mistakes in business looking back but not so easy to see at the time. Ya gotta have money and volume to survive and you don’t get that by ignoring the market and squandering money. Mary comes to mind.

Ya gotta have money and volume to survive and you don’t get that by ignoring the market and squandering money.

That is true, but Studebaker had two “legacy” problems. Their huge factory complex in South Bend might have been suited to wagon production, but it was too vast and too antiquated for volume auto production. Among others on their payroll were two painters. As soon as they finished their 12 month long repainting of the factory complex, it was time to begin the process again. That’s how sprawling it was.

Their other “legacy” problem was that they paid a higher hourly wage to their workers than “the Big Three” did. As a result of those two legacy problems, their overhead was much higher than the competition. When you’re trying to compete with Ford, Chevy, and Plymouth, but your sticker prices are not much lower than those of Buicks, it’s very difficult to compete in the long term.

s. Their huge factory complex in South Bend might have been suited to wagon production

I wondered if any one else knew or remembered the wagon connection.

I think my dad had that postwar Studebaker when I (b. 1949) was very young. His father had a somewhat newer Stude with lower and more modern look in maybe 1953-1960s.

When I was an infant my parents and I were stuck for a day or so in northern Illinois on a trip from Wisconsin to Louisiana to see my mother’s folks. Something had gone wrong with the distributor.

I wondered if any one else knew or remembered the wagon connection.

I would hope so! When you include their long history of high-quality wagon production, Studebaker was the longest-lasting/oldest vehicle manufacturer at the time that they went out of business.

Some trivia… The wagon that carried President Lincoln’s coffin in DC was a Studebaker, as were the old Budweiser wagons.

I’ve always liked that car style. Teenage-me parents had a used car w/ that same tear-drop body style, cool car, backfired like crazy when going uphill … lol … my brother in law had an old car with that body style too. Another cool car. Sometimes after he parked it, it’s entire lighting system, including headlights, would start flashing on and off for no apparent reason. His 4 year old decided to paint it with house-paint & paintbrush … lol …

The Budweiser Beer wagon I saw was a Studebaker.
I learned to drive in a Studebaker wagon, granted one pulled by a V8, not Clydesdales.
I had three, a 49 Champion convertible, a 57 Silver and a 58 Golden Hawk, did not have the $$$ to restore, the Silver was the best of the bunch.
Stil would like a 51/52 Starlight or LandCruiser.