Ok. So I have been dealing with an engine roar on my 08 f-150. 4.6 liter. Ive cleaned the throttle body. Replaced bank 1 cat converter. Changed all plugs and coil packs. Valve cover gaskets due to leaking on coils causing misfires. Fan clutch thinking that was my roaring issue. Changed passenger side exhaust manifold and gasket. Which was blown. Im still dealing with the issue. I know everything screams exhaust leak. So i will explain exactly whats happening and hopefully someone smarter than me can help. Because im running out of ideas. I also smoked tested entire vacuum system. Everything’s good. On a cold start up. I will get the engine roar on the passenger side of my engine. Only sometimes it will do this. Wont do it for a couple of days, and then it will do it for 2 days straight and quit again. Here is the odd part to me. I will drive home from work and after being on the highway for about 45 minutes going 70 75. I will exit to get on the feeder. I will come to a complete stop at the light. Then on take off i get the roar again up until 45 mph. After that the roar goes away and all is good. It will come back when i come to a complete stop sometimes and sometimes it wont. Im hoping someone has dealt with this or may have an idea of where i need to look next. Because its driving me crazy that i cant figure it out.

I will drive home from work and after being on the highway for about 45 minutes going 70 75. I will exit to get on the feeder. I will come to a complete stop at the light. Then on take off i get the roar again up until 45 mph.

That is the sound of the fan engaging to cool the engine. The fan clutch is operating as it should.

Typically, if the engine is hot when shut off and the fan clutch was engaged, the fan will remain engaged during cold start for up to 30 seconds before releasing.

I thought about that. I have had this truck 14 years now, and have never heard it do that. The noise will increase as i accelerate as well. Is that normal? Maybe my engine is just getting older and showing her age. It just hasnt ever done it before. Thats why i have been trouble shooting everything. I hope ypu are right honestly.

The fan clutch may be “tighter” than it was when new and engaging more easily/often than what it used to.

One easy way to check, remove the serpentine belt and start the engine. If the sound is gone with the belt removed, it’s definitely the fan clutch.

If you’ve ever replaced the fan clutch, or intend to, some of the aftermarket ones seem to engage more and make the fan a little more noticeable than the oem. Guy at work replaced his with a “heavy duty” aftermarket version and it sounds like a jet lol.

Maybe spray out the radiator. If it is having a hard time pulling or pushing air through it. 14 years of bugs and all. Good idea anyway to improve cooling.

An audio recording would help a lot.

Actually got to thinking and i have never flushed the coolant. Just got back from getting some coolant to do it. Appreciate all yalls help guys. Puts my mind at ease.

Just got back from getting some coolant to do it.

How are you going to dispose of the old coolant ? You just can’t let it drain on the ground and many places will not want it the sewer system.

I work in a chem plant man. Can put it in the haz tank and we truck it out

What I meant was pressure washing and scrubbing the exterior fins to help in air flow. 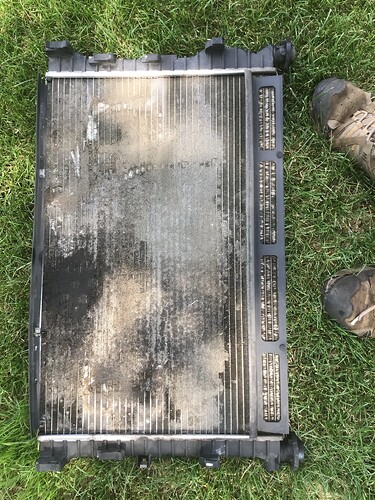 The only time I’ve ever heard an unusually loud “roar” sound from the engine compartment on my Corolla is when the electric cooling fan turns on. But that sound doesn’t change w/rpm or vehicle speed.

Valve problems could make this sort of sound I suppose, if the intake valves were not sealing and allowing exhaust gasses/sounds into the intake manifold. Good idea to do a compression test for this. Verifying EGR and PCV systems are working correctly seems worthwhile too.

You might try to get it to happen when parked in the driveway, then use a length of discarded garden hose as a stethoscope to narrow down where it is coming from.

The old style fluid filled fans would wear out and then they would roar. Electrics don’t have that same issue but roaring was a sue sign of a fan failure. Note to self tighten nuts.

Fuel and air ratios, compression test. I have done it all. Appreciate the info tho. Flushed coolant and took her out. I live in a area with alot of hills. So i got on it pretty good. No roar anymore as of yet. I will say my coolant was brown. Almost tea colored. Im thinking my water pump may have been affected by it. Anyway. If it comes back i will post again. Thanks all

Guess i should have posted. My truck has 256k miles. Been obsessive about maintenance on it though. Its been good to me

Been obsessive about maintenance on it though.

I will say my coolant was brown.

Now you mention it, I have heard a sort of grinding sound coming from my Ford truck’s water pump before. Caused by mineral deposits that have broken free from their moorings. Often this sound would just go away by itself. This problem would occur immediately after, and only after I had treated the cooling system with a cooling system cleaner. My solution, I don’t use a cooling system cleaner any more. Just replace the coolant with fresh stuff every 2-3 years. It was very obvious it was coming from the water pump, just by listening to it with the hood open.