Another thread here covered early versions of fuel gauges. After reading an article about a DKW Auto Union 1000 , I got to wondering about early forms of engine coolant temperature gauges. That car appeared to use a an ordinary mercury thermometer for that function, mounted vertically on the dashboard. Presumably the coolant was routed past the bulb somehow on the other side of the firewall. I think that car was made in the late 1950’s. Anybody know of earlier dashboard coolant temp gauges? It’s a pretty nice looking car imo, see below. 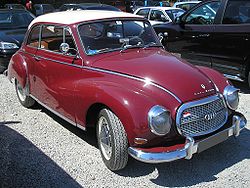 That is a beauty! I love the individuality you have in the designs of the older cars that have gotten lost for aerodynamics and better fuel economy

I love it. I too appreciate the aeronautic designs tried in cars of this vintage.

Re: the temp gage, they aren’t dash mounted, and they predate me, but I seem to recall seeing photos of temp gages mounted directly onto the radiators (visible from the driver’s seat) on very early cars. I just tried unsuccessfully to find one to post, but I know some existed. Perhaps someone with a better search engine can have more success finding a photo?

The aftermarket temp gauges that replaced the radiator cap that I have seen were called Moto-Meters, they came in many designs, some branded for specific cars. There may have been other makes but I haven’t heard of them. Sorry, I don’t know how to post things from other sights.

Thanks, my friend.
I just now found a link to the gages I was thinking of. They go way back in time.

I took another look at that DKW Auto Union 100 article, especially the dashboard photos, and what I thought was the coolant temp gauge I think now is really just the speedometer. It’s unusual as it is oriented vertically, so it sort of looks like a thermometer. But the numbers are more what a speedometer would read.