U.S.A Today ran a story about a guy in Arizona having trouble getting his photo on a Driver License. After several tries he finally succeeded. Now it could be revoked.

He says it’s a matter of religious freedom because he belongs to the “Church of the Flying Spaghetti Monster.”

To me, Arizona seems to have a pretty good and fair way to filter what should be allowed for the photos and what should not be allowed.

Where do you come down on this matter? Allow the license or revoke it?

After years of trying and getting turned away, an Arizona man has finally received his official state driver's license bearing a photo of him wearing a spaghetti strainer on his head.

Revoke. A driver’s license is an official state document used for, among other things, police to identify drivers/killers/nefarious people. If he refuses to comply with the simple photo rule, he can walk.

Naturally the article fails to address the critical question, which is “are Muslims allowed to wear hijab/are Jews allowed to wear yarmulkes, etc.” If they’re not, then he shouldn’t get to wear his colander either. If they are, then AZ screwed up.

Note that I’m not suggesting he shouldn’t be allowed to wear the colander because “Pastafarianism” is a BS religion. Of course it is, but the government should not ever be in the position of determining whether or not a religion is BS unless that religion is committing crimes and getting away with them because it is a religion. Or in other words, cults like Scientology should not be allowed to hide behind the cloak of religious immunity.

I’m in agreement with mountainbike and shadowfax. Here in OK it’s required that one remove any head gear no matter what it is before the picture is taken.

Maybe the employment of the person who caved on this should be reviewed. Even my local bank has a sign on all of their branches stating that any hats, caps, sunglases, or anything else on the head must be removed before entering the bank.

The drivers license photo is used to identify the holder. I bet the pastafarian holder of this license doesn’t wear his colander at all times outside the house, or at least when he drives his car. Does he hold down a job with that thing on his head? Oh yeah, sure thing, no fooling…

Equating his headdress to a hijab is ridiculous, and should not be allowed. BTW, I think Muslim women should be allowed to wear their hijab for the license photo since they are always seen in public with it on.

I am conflicted on this. Courts have ruled that religion isn’t an excuse for illegal activities. I.e. Rastafarians smoking marijuana. Or Nuns forced to offer birth control in their health insurance. So they can and do rule when religious freedoms conflict with the laws. That said, the government should not be in the business of deciding which religions are bogus or valid. The question of “always” wearing the colander when driving his car is a valid point.

It is a little Orwellian that “facial recognition software” is a reason for denying the wearing of a colander in a picture.

Last photo shoot for me they made me take off my glasses. I wear glasses every waking minute. They said it was for clearer identification purposes. Fine by me. So the idea of the colander being worn all the time or not doesn’t hold water in my state. Personally, I think this stuff has gotten out of hand. I don’t care about your religion. It’s about public safety. Take that stuff off and pose or don’t get the license. A driver’s license is a PRIVILEGE not a right.

Equating his headdress to a hijab is ridiculous, and should not be allowed. BTW, I think Muslim women should be allowed to wear their hijab for the license photo since they are always seen in public with it on.

Now you’re getting into unconstitutional territory. You’re favoring Muslims over Pastafarians. I’m fully aware that that’s ridiculous, but it’s been made pretty clear that the government isn’t supposed to allow one religion to do things that it forbids other religions from doing. And even though Pastafarianism is a farcical religion, the government isn’t allowed to decide what is and is not a legitimate religion, for obvious reasons.

I have never seen that type of sign at my bank but years ago I was with my Wife at her credit union. The teller asked me to remove my cap. I suddenly remembered all the bank robber security camera photos on the news with caps, hoodies, and sometimes sunglasses. When I visit my bank I leave my cap in the car.

Naturally the article fails to address the critical question, which is “are Muslims allowed to wear hijab/are Jews allowed to wear yarmulkes, etc.” If they’re not, then he shouldn’t get to wear his colander either. If they are, then AZ screwed up.

Interesting question. If they allow this clown to wear his colander, should they allow a Muslim woman to wear a burqa? If they did, would cops, registries, courts etc. be able to refuse to accept it as an I.D.?

The guy is an idiot. Pandering to idiots is the cause of enough problems already. Let’s not add to them.

Well, looking on the bright side of this ridiculous situation, at least when he is pulled over by a cop, as soon as the cop sees this guy’s license, the cop will know that he is dealing with a kook.

That extra bit of…identification…can be helpful to the boys in blue!

The guy is an idiot.

I’m not willing to go that far. Pastafarianism is in the vein of “A Modest Proposal.”

Swift wasn’t really suggesting that poor Irish peasants sell their children to rich people to be cooked and eaten. He was pointing out the cruelty of his society’s attitudes toward the poor.

Pastafarians don’t really believe in the Flying Spaghetti Monster - they’re pointing out the inanity of allowing governmental policy to be shaped by religious doctrine.

should they allow a Muslim woman to wear a burqa?

I think it needs to be clearly spelled out. The rational approach would be “we have to see your face.” Then hijab is fine, yarmulkes are fine, turbans are fine, and, yes, colanders are fine if that’s the picture you want people to see every time you’re carded at a restaurant. Burqas are not acceptable because we can’t see the face and therefore it’s not a photo ID, not to mention the fact that people who are driving cars should not be wearing face masks that limit vision in the first place.

It’s been held as perfectly acceptable to limit freedom of religion when exercising that freedom would put others at risk - the alternative is that human sacrifice should be permitted if your religion demands it.

But wearing a colander on your head when getting your license picture taken does nothing to put the public at risk, so there’s no acceptable reason to violate the first amendment by making him take it off.

Does AZ allow Catholic nuns to wear their hood for the photograph?

As you might guess, I’m in the camp of no hats, scarfs, etc. on identification photos regardless of religious practices . Drives me nuts when guys wear their caps in restaurants too. At any rate nothing is going to happen to these folks if they choose not to have a license, but if they do choose, then there are certain requirements. I remember some years ago having an event at work and we took pictures. One Asian lady became very very upset because their belief is you steal their soul by taking their picture. Who knew? Sorry but she would not be allowed to have a drivers license if she couldn’t have an identification picture. Its time we stopped with all this non-sense.

Actually, this (right to photo on license while wearing colander) was upheld in Massachusetts some time ago:

Lindsay Miller, a follower of the 'Church of the Flying Spaghetti Monster' was originally denied by the Massachusetts Registry of Motor Vehicles, but the decision was soon overturned.

Safe to assume the guy used the colander and Pastafarian argument as a means to thumb his nose at government and taxes.

ID photos are for identification purposes. So barring colander headgear is valid and reasonable by the license bureau. 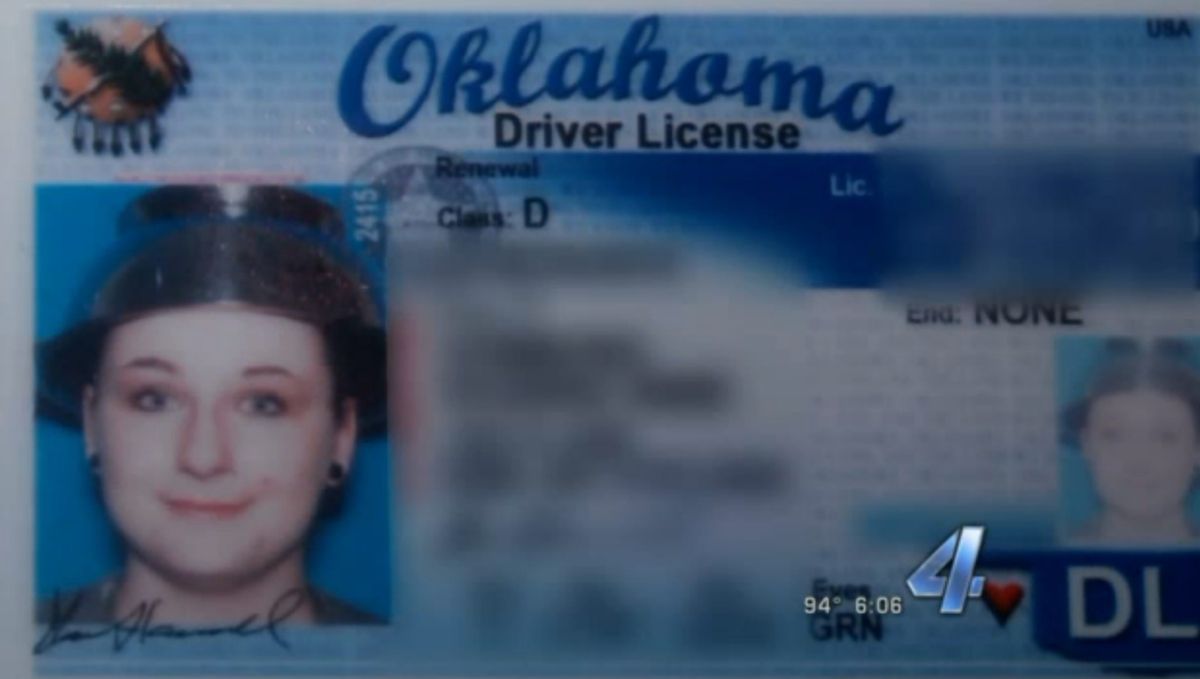 Shawna Hammond — a member of the spoof 'Church of the Flying Spaghetti Monster' — claimed she had to don the colander at all times as part of her 'Pastafarian' faith.

So It appears OK allows religious headgear, now the state has to define legitimate religions I suppose.

No, @marnet, they are thumbing their noses at religion. If you read the article posted by @tom418, Ms Miller, the pastafarian subject of the article, referred to herself and others as pastafarian atheists.

In my view atheism is also a religion but do we think the courts always get it right? According to laws? Don’t think so. Just because a court decides something doesn’t mean it makes sense according to the law. The picture is for identification purposes. If anything impairs that identification, it should not be allowed. I’m not suggesting that the pictures need to be naked since that’s not how someone normally would dress while driving but I would find it interesting if the spaghetti pot was not worn all the time as they suggest.

@jtsanders Yes, also mocking religion. Good catch to call me on that.

Side note: I have yet to see anyone wearing a head colander in public, driving or otherwise, let alone donned all the time.