The Futureliner was just really a styling exercise, the chassis used was underpowered, underbraked and handled lousy. If it went into production it would have needed a chassis and engine designed for it.

Sure looked cool though.

GM got it right in the 70s with the GM Motorhome.

As a kid I drooled over the ads for the GM motorhome. Even in ugly seventies colors it was so much cooler than other motorhomes. I never drooled over any other RV (OK, Airstream trailers were cool, too, but not in the same way. ) Now people will pay a lot more for motorhomes than they would back then, so maybe something as novel as the GM could succeed now. Probably not, as it isn’t as humongous as the modern high-end models. I can’t imagine driving one of those monsters. I guess out on the Interstate it wouldn’t be so bad, but don’t their drivers have to get off sometimes, other than at truck stops? Can’t see much if you never leave the Interstate.

I had the opportunity to by a small 70 s era rv, cheap, a few yrs ago. it was actually in good shape except for needing a new 350. I m still kicking myself…

@wesw: Actually the GM stands for Gargantuan Monstrosity. (but I do think it’s cool)

@MarkM They really aren’t all that bad on city streets. Especially if they’re relatively small like the GM motorhomes were. Even the 55 foot monsters out there today aren’t too bad because as soon as you pull off the highway, you park the motorhome and drive the car you’ve been towing behind it.

More info on it: 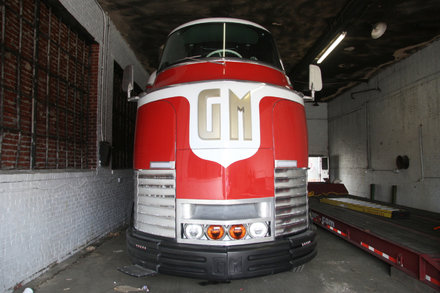 G.M.'s Futurliner to Take Its Place Among Historically Important Vehicles

Futurliner No. 10, one of 12 G.M. built for its Parade of Progress, is scheduled for inclusion on the National Historic Vehicle Register.

You can buy the very one we’re talking about if you want. Ron Pratt is selling his entire collection of auto related stuff, including 100 vehicles. One of them is the Futureliner that sold for over $4 million. It’s your lucky day! Or, you can just tune into the Barrett-Jackson auction from Scottsdale soon and watch on TV as I will do. And while unique, Pratt has a ton of unique cars and trucks that are far more interesting than the Futureliner.