Does battery connecting order make a difference to the electronics?

The usual recommended order to connect a battery is the + post first, followed by the - post. That’s to prevent sparks. But what about how the connection order affects the car’s electronics? My motivation to ask is an article in a car repair magazine that said on some cars (Triumphs I think) the instrument cluster won’t initialize on power-up correctly if you connect the battery negative last. Instead you have to connect the negative post first, and positive last.

When is the last time you worked on or even saw a Triumph?
And didn’t they have the chassis positive?

I always do as you do. Positive first and negative second to avoid those tell-tale marks on the 5/16 ths or 1/2 wrench.

When is the last time you worked on or even saw a Triumph?

How is that pertinent?

Your comment about Triumphs and the dash initializing, that makes it pertinent.

It’s never made a difference on any car I’ve worked on. I know because I did it in the wrong order for years.

There are still collectors out there. A friend of mine owns a Spitfire.

Fair enough. I’m not asking about Triumph’s specifically though. It’s about how the connecting order affects a car’s electronics during power up. If that were an actual effect, it would make sense to try it both ways when you had a stubborn electronics power up problem . I do see TR7’s driving around here once in a while. They were made until the early 80’s I think, so I doubt any of the later ones were chassis +.

I think nearly all old British cars used positive ground. My BSA motorcycle was positive ground, and so was my '54 Ford pickup truck if I remember correctly.
There were a lot of positive ground cars back in the generator and 6 volt days. The terms “positive” and “negative” are arbitrary anyway. It turns out that electrons actually flow from the negative to the positive poles of the battery.

However, I can’t see how connecting order can possibly make a difference in the electronics as long as we are talking about two wires. Opening the ground amounts to the same thing as opening the hot side of the circuit.

The usual recommended order to connect a battery is the + post first, followed by the - post. That’s to prevent sparks.

This isn’t to prevent sparks, which will happen either way, which is why eye protection is always strongly recommended.

As a firefighter we are trained to cut the negative cable 1st then the positive if we need to disconnect the battery. For the reason @lion9car mentions, in case your tool slips and you hit the chassis you won’t cause a spark. Most cars in the US have a negative ground. Older British cars and hybrids, Tesla etc bring a whole new set of challanges.

Oh yeah… Hundreds of volts DC! Spark that and die. And the pesky problem of car fires that happen days after accident as the batteries short internally. Could make impound lots a real problem as more of these EV’s hit the roads and other cars.

All the major manufacturers of electric cars supply this kind of info. Some have a bar code on the windows that you can scan with a smart phone to get cut locations. This particular one starts on page 13. Just what we want to look for on a cold rainy night, but it has great info.

We had a car fire with a traditional battery that started in the impound 12 hours after the car was dropped off, damaged 3 other cars around it.

Doesn’t make any difference as far as I know.

I believe the Triumphs were discontinued about 1980. Most cars did not use electronic engine controls on their carbureted cars until 1981 so there wasn’t much in the line of electronics.

Many Euro cars and a very few Asian cars used a computer pre-1981 although those were limited to the fuel injected models.

I had a 69 MG1100 that was 6 volts positive ground. Only electronics were the radio.

I remember it as 6 volts, but on reflection, you could be correct, else how could I have jumpered it. Memory is a fragile thing…

I cannot say why, but I have always connected the positive first then the ground. Rationally I cannot come up with any idea other than in my conception regular current flow is from positive to negative, except in positive grounded cars of course, so maybe there is a backwards surge from a ground connected first, ie ground flowing to positive rather than positive flowing to ground. SHEER CONJECTURE, no clue. Most small batteries one pushes the ground, spring side in first, live and learn. 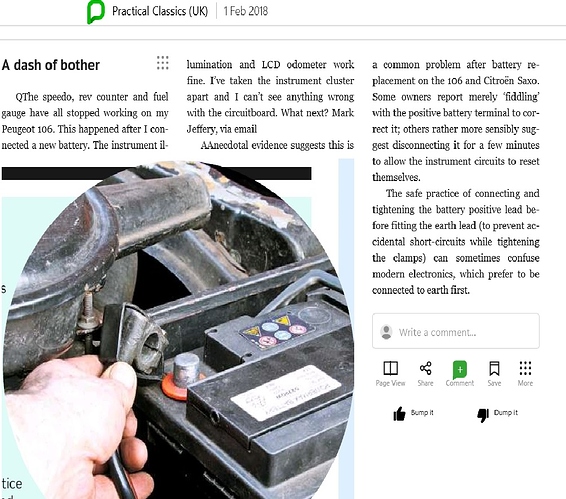 This isn’t to prevent sparks,

Whenever I’ve accidentally shorted + to - with a wrench, it creates a pretty big spark. There’s small sparks whichever way I connect a battery as long as nothing gets shorted out in process, but when I accidentally short it out, big sparks. That is my experience anyway.

And when is the last time anyone saw a Peugeot of any number ?