Does Anyone work for a Toyota dealership in the southern US?

I’m seriously considering relocating my life to Florida. We visit every year and I lived there years ago but was very young. Now that I have Toyota credentials I don’t worry about finding work. My questions and concerns revolve around the inevitable season changes in work and the difference in labor charges. More specifically, I’m trying to get a rough idea if jobs pay the same or similar. I have access to TIS but it doesn’t allow me to click on any othrler state than mine to look at the labor time guides.

I work for Toyota and I don’t care where you live. Any insight on what you’re paid for certain jobs?

Why would anyone tell you what they are paid and how would you know if they are telling the truth.

Why wouldn’t they? It’s flat rate labor times. In other words… general public knowledge… not their salary

I can’t speak for FL but in my OK neck of the woods dealer labor rates are near 100 and hour. We’re kind of down South…

Many years ago mechanics used to get 40-50% of the door rate. Over the years the door rate has gone up and up and up while the percentage has shrunk.
When I got sick of the dealer rat race that percentage was about 25%; not to mention the shrinkage of warranty flat rate times.

A friend of mine who has been a Honda and Toyota tech for decades in OK City was telling me a few years ago that not only has their flat rate continued to climb but they were told that customer pay labor was now going to be figured using warranty times.

Exactly what do you mean by “Toyota credentials”

Are you planning on buying a house in Florida?

Are houses more affordable there, versus your current location?

Why don’t you care where we live?

As for “what you’re paid for certain jobs?” . . . please elaborate

Do you mean how many hours Toyota dealership mechanics get paid to replace a water pump on a 2005 Corolla?

Or do you mean what Chilton, Motor, Alldata, etc., say a shop charges to replace a water pump on a 2005 Corolla?

They’re not always the same figures

I would carefully concentrate on what @ok4450 said . . . I can echo much of that

Trust me, as a mechanic, you do NOT want to get paid warranty times to do a water pump on a 15 year old vehicle. It could very well be that every single bolt is seized, rusted, etc. Might have to chase threads, install helicoils, etc. Might be several issues that you wouldn’t have to deal with on a car still under warranty.

I’ll say something that you may not want to hear, but I feel it’s good advice . . .

Look beyond the dealership

There are other employers out there. Might want to consider UPS, Fedex, and other fleets, such as your local city and county. Any of these employers would offer much better benefits than a dealership. And there’s greater job security. Sure, the vehicles aren’t as glamorous or high tech. But trust me on this again, you’ll learn a lot and you’ll adapt. There’s no service manager yelling at you, no customer threatening you, etc.

I’ll be honest . . . If I was still at the dealership, I would have to show up early, leave late, work through lunch, AND guzzle energy drinks non-stop to be able to earn as much as I do now. And the benefits would still be inferior.

I’m speaking only for myself

I don’t know how young you are, but if you think you can keep up the pace of a 25-year old forever, as an example, think again. The day will come when you slow down, get hurt, etc.

That last statement was because from your text, I get the feeling you’re still on the young side

Florida is a right to work state therefore wages tend to be lower. But on the other hand no state income tax and depending on the area home prices are reasonable.

In this example (Orlando Florida zip code 32822) the hourly rates are $108 hour at Toyota dealerships
Register for free to driverside.com and you will get the repair cost calculator of any Toyota vehicules and the hourly rates they charge according to the zip code you choose. Example 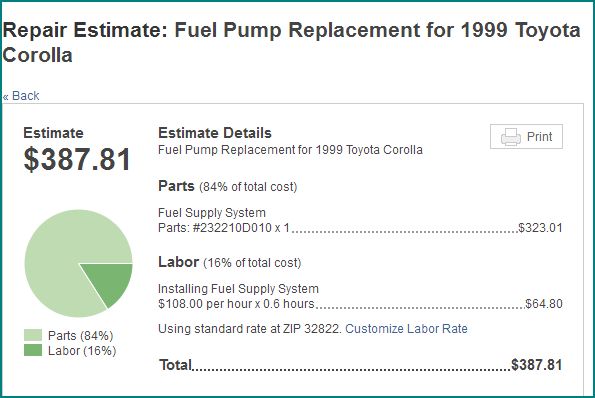 Instructions: Register to the site(free)
Choose vehicule: Year,make,model and save vehicule to your list
Click on: Car Prices and Value and enter any zip code you want
Click on: Repair cost calculator and choose the repair you want on the list.
you will find an estimate like the one above.Tip: to change zip codes, go back to car prices and value and change the zip code on the page.

I don’t think the OP is wanting repair costs but wants someone to do his job hunting for him.

Yep! The hourly rate a dealership charges for a repair is not the salary the mechanic will get.

A few years ago I was rummaging in my attic for something. I ran across an old 1970 repair bill that I had paid at the new car dealer to have a new clutch kit put in my '68 Roadrunner.
At the time of the needed repair I had had a major knee surgery and was on crutches after 2 weeks in the hospital so I had to pay someone to fix my own car.

The flat rate labor at the dealer in 1970 was 7 dollars an hour. They charged me 3 hours for a total of 21 bucks labor and 35 dollars for the entire clutch kit. I knew the guy who did the work and he told me at the time that he got 10 bucks of that labor charge which makes it almost 50%.

I assume by Toyota credentials the OP means a series of factory schools and the ensuing tests???

I appreciate your response and apologize for making such a simple question seem very difficult.

First, I’ve been in the business for ten years. I have over 100 certifications recognized by Toyota as a repair technician and ASE. Any Toyota new car dealership would kill to have the certs that I have because it takes a certain tenure to obtain them.

What I’m asking concerns the labor time guide from NY to FL. I get 2hrs pay for a brake jobs but someone down there might only get 1.6. See why I’m saying?

Another way to look at this might be to compare mean wage info for the current and future location.
Here’s a great site that, if you scroll down to the map of mean wages by area, has a county by county comparative. Quite interesting to see the variation across the state of FL.

Your comments are rude and should not be posted on a site viewed by 1000 of people each day. People here are just trying to help in case you didn’t notice. Took me a while to came up with an answer because your post was not clear to me. Have a good day!

I think the comments about corollaguy are uncalled for. Or Volvo as the case may be…

It seems to me that you’re assuming every dealer will pay the same flat rate on a certain job and I don’t think that’s feasible or going to happen.

A dealer in a smaller town in the panhandle may charge 1.5.

Here in OK I worked for a dealer where we got 1.5 to replace pads and rotors. Another dealer I worked for in a larger city paid 3 hours. Huge difference.

I quit working for the 1.5 dealer and went to work for another dealer making 7 dollars an hour less per flat rate hour. My paycheck also increased by 30%. Kind of illustrates the swing in things…

My apologies for thinking you’re younger than you actually are. Hope you didn’t get too upset with my mistake

Glad to hear you’ve got all those certifications, especially the ASE credentials

Sorry I won’t be able to help you with labor times, as I am only able to get Chilton, Alldata and Motor times, not Toyota times. We know they’re not the same

Good luck with the relocation, if it happens

I appreciate your help.

I would think that dealership published flat rate times are the same nationwide for most service procedures. But that’s not to say that one facility might not charge more or less than another for the same service, whether dealer or indy. I worked at a shop that paid us 2.0 per axle for most brake jobs when the shop down the street was doing it for 1.2. That included turning rotors or drums.

I spent 25 years in the Seattle area, then we relocated to a small town in Oregon 2 years ago. The difference is amazing. I don’t understand how anyone makes a living in this city. I couldn’t hire a kid to push a broom up there for what a decent tech will work for in this town. And that’s not because of the flag hours, it’s because of the pay rate. When I first moved here I hired on as a flat rate tech at this shop. I negotiated a pay rate that was 35% of the door rate knowing that my production would be 125-135%.

I assume you’ve also done your homework as far as real estate and housing, cost of living as far as utilities and taxes. This state has a state income tax which is killing me. I can’t buy bourbon at the grocery store and if your doctor thinks you need an MRI, you have to go to the hospital instead of the medical imaging office in the strip mall on the corner. My 5th grader is in a class with 42 kids and I can’t get my driver’s license on a Saturday because the office is closed.

Just sharing some of my relocation experiences.

I can’t get my driver’s license on a Saturday because the office is closed.

As I was driving around, doing chores this past saturday, I noticed the dmv near me was actually open

Very unusual, because they haven’t been open on saturdays for quite a few years

There’s a higher gasoline tax and higher registration fees happening in California recently. Maybe the DMV opening change has to do with that. You’d think the DMV – being in service to the public and all – would prioritize being open on Saturdays and Sundays, even if that meant they were closed some days during the M-F portion of the week.