Do you recall these gas stations?

When I was a kid, most the gas stations in the area were either Esso or Flying A. 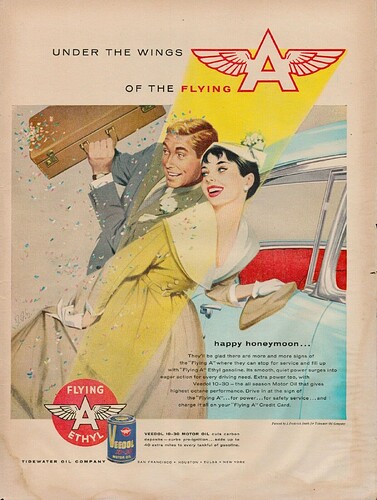 Not where I lived. Sinclair, Phillips 66, Standard, Mobil, and Clarks100.

We had flying A, esso, texaco, mobil, and sinclair.

Not where I lived. Sinclair, Phillips 66, Standard, Mobil, and Clarks100.

We did have a few Sunoco, Shell, Gulf, and Sinclair stations, but the ones that dominated in my area were Esso and Flying A. When we would travel around the country on summer vacations, I always found it interesting to see the different brands of gas.

The most memorable one was in–I think–West Virginia, where my mother had an urgent need for the restroom, so my father pulled into a Pure gas station, and while Dad filled the tank, Mom trekked to the restroom–which turned out to be an outhouse! After experiencing the unspeakably filthy conditions there, she never again allowed my Dad to pull into a Pure gas station, and she used to say that there was nothing “pure” about that particular gas station in WV.

I grew up in Los Angeles, never saw a Flying A but do recall Esso stations.

Gas stations had garages and were everywhere. At the corner at the end of the street there was a Texaco, Exxon, 76, Mobil, and behind the Mobil was an Arco. All with garages, all did car repairs and fixed/sold tires. I think it’s a testament to how much more reliable and low maintenance cars have become that there isn’t a repair shop every 3 blocks across town.

Deep Rock, Purple Martin, Hudson… I worked the overnight shift at Hudson on Highway 18 in Waukesha, WI summer of 1970 while in college.

In my community in Indiana we had DX, Pure, Sinclair, Gulf and Standard. There was an independent called Hartley that had a number of stations.

When I visited Cincinnati in 1972, I gassed up a couple of times at a Sohio station which was giving away Flintstones drinking glasses as a premium. Those glasses were really sturdy, and I used them for several years.

I also remember the “mileage ingredients” in the gasoline. D-X had Boron, Shell had TCP and Super Shell, the premium grade had platformate. Standard had m2pg. Sunoco had some ingredient that gave it a blue tinge and was advertised as “Blue Sunoco”. I have no idea what chemicals were used in these mileage ingredients. When I took chemistry, there were only four known elements:. earth; air; fire; water. We made compounds of fire and water and the result was firewater. We examined many isotopes of firewater for the physical property of taste.

New ones in MN, Tesoro

I also remember the “mileage ingredients” in the gasoline. D-X had Boron, Shell had TCP and Super Shell, the premium grade had platformate. Standard had m2pg

Back in the '60s, Sinclair advertised that the nickel additive in their gasoline would reduce engine wear: 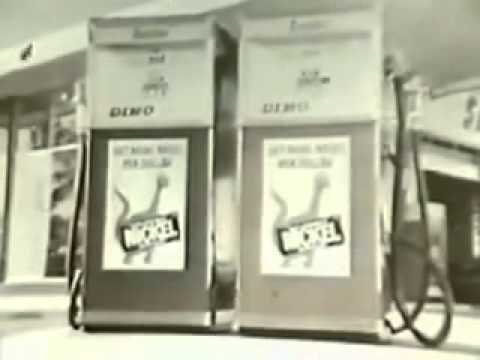 Forgot about Pure, in the 50s, in WI, we used to stop at a tiny convenience store that sold Pure.

When we went to Kentucky on vacation went to Gulf, the gift was gold colored horse shoe pins.

Oh, and I had a Sinclair dinosaur beach toy.

Shortly after Esso began their Tiger Tail giveaway in conjunction with their “Tiger-Power” premium gas, the local Shell station erected a sign stating that they were capable of removing tiger fur that would clog one’s fuel line.

Gulf’s reaction to the Tiger Tail promotion was some self-adhesive plastic horse shoes that you could put on your rear bumper because their No-Nox gas gave your engine “extra kick”. 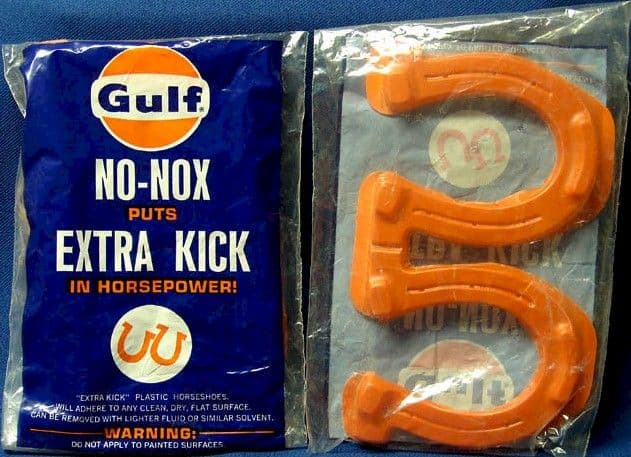 Ah, that was the connection between horse shoes and Gulf, the pins were similar design, maybe 3/4 x1/4 inch.

Never seen a Flying A… in high school we would have make crude jokes about that name.

Around Ohio growing up we had Sohio (of course), Gulf, Sinclair, Chevron, Sunoco and a few Texaco stations.

All did service as well. Oil changes 4 times a year, tune-ups maybe once a year, maybe twice. Tires and the odd GM timing chain at 35K miles. Some did alignments but there was a serious alignment shop that did the big suspension jobs everybody went to. And Frank’s Carburetor shop for tricky fuel problems, rebuilds and hot rod carb tuning.

No Quickie Marts but they often had a Coke machine, a candy and cigarette machines

When we drove out East as a kid, I was happy to get those horse shoes. Around here we had Clark, dx, she’ll, pure, Sinclair, standard, Mobil, etc. but we also had Erickson and holiday stations. They were brothers that may or may not have been on good terms. We had trouble collecting from holiday for flower deliveries and had to make a house call. It was a rumor that holiday watered their gas down so tried to avoid them. Good gas now though. Oh yeah we had skelly too.

I grew up in Central NY. We had Esso (Now Exxon). Sinclair. Atlantic became Arco. Didn’t have Flying A.

In the late 70’s and 80’s when companies were merging and closing…this one corner in Syracuse on Erie Blvd had an Exxon station, BP and Mobil. BP moved out so the owner bought into the Exxon franchise. Then Mobil and Exxon merged, so for a while all 3 stations on the same corner were Mobil.

As I recall, we filled up our Chicken Delight cars at Holiday, no problems with the gas. Had a bunch of beer glasses from Clark.

I lived in New Berlin back then and worked in Waukesha.

A buddy of mine got a load of water in gas from Purple Martin so nobody would go there after that!

We had Esso (Now Exxon). Sinclair. Atlantic became Arco. Didn’t have Flying A.

Still see a Sinclair every now and then. Sohio I remember seeing. Never recall seeing a flying A. Remember sunoco and they had a variety of options for octane, you moved a lever, Stopped at one maybe 10 years ago.