Not many questions here about diy Tesla repair and maintenance. Is there something about the personality of a Tesla owner that eschews diy car repair? Or is the car just too complicated, or no written shop procedures and assembly drawings available for diy’ers? Do you think other EV manufacturers will adopt the same thing? Discourage diy’er repairs?

Tesla strikes me as the sort of company that would consider much of that information to be intellectual property and restrict it from availability to non-Tesla certified users.

Theoretically it should have much fewer wear items to need repair. Except the stupid exterior door handles. But instead has more electronic functions that would be less familiar to most DIY’ers.

There was a YouTube way back by a guy trying to do his own repair. Didn’t work. Got in way too deep and spent a lot of money digging out.

From what I have heard mechanics even shy away from electrics so don’t think you’ll get a repair manual with them.

Seems plausible. I have a car part on hold waiting for me to pick it up at an auto parts store, went there yesterday, couldn’t get it, store closed b/c electricity outage, big electric demand here b/c of heat wave, rolling black-outs occurring. Auguring this?: if a situation develops in the economy where there’s a lot of oil and not enough electricity, pretty obvious solution available, burn the oil, create steam, spin turbines, create electricity. In other words a switch to EV’s may not reduce the amount of carbon pollution as much as predicted.

Getting back to the Tesla diy question, I guess folks who buy Mercedes don’t go for the diy’er method either. Or at least not nearly as many as other cars. Maybe the issue has nothing to do w/Tesla, but is simply the price of the car. Higher priced cars don’t attract diy’er owners.

Ya think? Usually gas is used to spin the turbines anyway. But ya it is more than foolish to shut down oil and gas production thinking wind and solar will cover it. Plus read a report yesterday indicating the mineral production is simply not available for what they are planning. Not to mention who owns the minerals.

It’s a complex issue, that’s for sure. It’s all a little beyond my pay grade. On the other hand there are serious conflicts of interests involved, so anything I read in the media is suspect, especially if from a group that benefits from crude oil sales.

running his gas generator to charge his electric

Car and Driver did it this month as they were testing electrics on a track.

I can and have done the math. If the electricity comes from the highest efficiency coal fired power plants, a gasoline auto is more efficient wells to wheels. If it is nat gas generated, it narrows the gap. If power is nuclear, solar, hydro or wind, the EV is superior.

The current mix of power sources across the US makes EVs a bit better but there is not early enough generation capability to power EVs if they capture even 15% of the total car market.

There is no way to build enough power plants, windmills and solar farms fast enough to support that. Too much NIMBY involved. The 30 years to never it takes to build a nuclear plant won’t help near term. 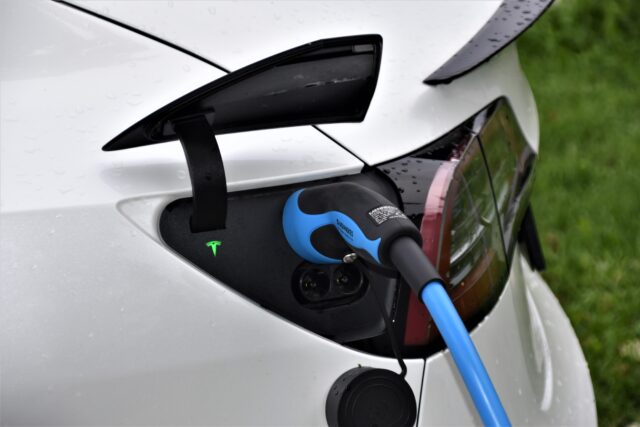 The CEO of Piedmont Lithium, one of the United States' few lithium mining operations, says it will be impossible to meet every region's EV target right on time.

hmmm … Lithium comes from the ground, just like oil. In the 1970’s some folks (e.g. The Club of Rome) were predicting we’d have run out of oil by the year 2000, but pretty obvious there’s still plenty of oil, much more than in the 1970’s. Didn’t take into account improved methods for discovery and extraction. Seems pretty likely same is true for EV-required minerals, that supply is not the key issue…

I get maybe 4 hours of runtime for a quart of gas for my 3200 watt generator, not under full load.Maybe someone has the time and talent to figure out how many gallons of gas I need to charge a tesla.

Ummmm…no. I’m involved in both oil and lithium extraction, and it’s way different. Just because we need more doesn’t mean it’s there. We certainly can extract more lithium over time, but it’s not something we can just snap our fingers and get.

So a little less than 2 gallons of gasoline.

George, that’s WAAY too low. A generator is maybe 20% efficient, so multiply that by 5.

Based on 16 hours run time per gallon of gas, you’ll need about 2-3 gallons of gas to charge any of the larger EVs. Yeah, no, defies physics. So I doubt your fuel consumption figures.

The generator might idle for 4 hours per quart, but it won’t produce anywhere near 3200 watts at that consumption. A gallon of gas has 33kW-hours of energy. Your generator is, at best, 15% efficient so it is using 0.64 gallons an hour. You’d need about 30 hours to charge to 80% a 100KW-hr EV battery so then you’d need about 19-20 gallons to charge up an EV. 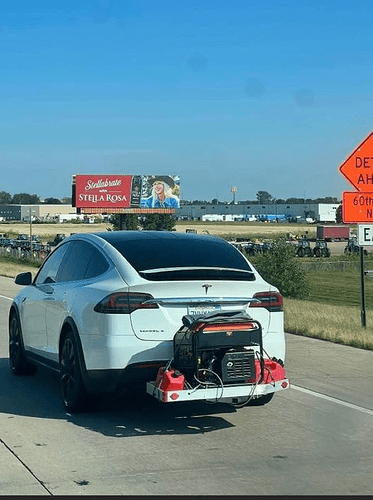 I have all battery powered lawn equipment , so I don’t have to go get gas in a can . Noway am I going to use a gas generator to recharge an Electric car .