Hello guys. I brought my car in to Toyota for them to check the coolant level. Someone popped the hood open, looked, then said it looked fine. But to me it doesn’t look fine. I’ve never seen the coolant so low before. 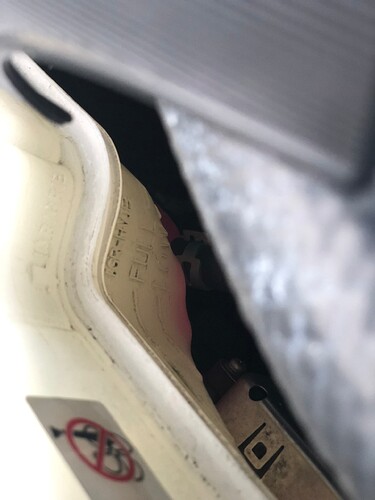 For a 2018 model with only 43k miles, should the coolant be so low? Could this indicate a leak somewhere ?

That’s just the coolant in the overflow reservoir. It will fluctuate up and down.

If you’d sleep better at night…. Fill up the reservoir to the “full” mark, and monitor it for a while.

I don’t think you have an issue, personally.

There is a Full line and another I can’t read on that reservoir. When the engine is cold, the coolant level should be between the full line and the minimum line. Your owners manual will probably explain the lines. As ledhed said, the level will fluctuate up and down. I, too, would fill it to Full when cold and then monitor it to detect any leaks or other loss.

That reservoir is pressurized, they would need to wait for the engine to cool for a while before removing the cap. Next time your car is in for service, ask them to add coolant.

The car is nearly 5 years old, normally the coolant is topped off once a year.

Or just ad a cup or two yourself. When I buy a car, I stop at the parts counter and get a gallon of the proper coolant to have.

Thank you. My car won’t need to go in for service until 9000 miles later. With such a small amount of coolant, is it safe to keep driving until then ?

But you can also fill/top it off yourself.

And by “fill” we mean add factory coolant to a cold engine to the level specified in your owners manual for a cold engine. Your photo shows the level slightly below the “low” mark.

Your owners manual will probably explain the lines.

And by “fill” we mean add factory coolant to a cold engine to the level specified in your owners manual for a cold engine.

Here we go again with the “owners manual” drivel again.

Didn’t anyone notice the screen name!

Dealer checked coolant level. And service is not needed for 9000 more miles. When was last oil change? And next?

Here’s another vote to fill it until it’s full now and then start monitoring it more closely. Otherwise you won’t know how big of an issue you actually have here, not to mention that you could actually run too low sooner or later.

It sounds like you are doing 10000 mile oil changes . Oil changes are done in xxxx miles or xx months . Look in your manual for just how many miles or months .

Oil was changed recently in April at 42k miles.

My car won’t need to go in for service until 9000 miles later.

Maintenance services are every 5,000 miles/6 months, the oil is changed every other service. You shouldn’t drive 10,000 miles without inspecting the tires, brakes and fluid levels.

I drove 1 hour away to the Lexus dealership a moment ago to show them the coolant level and they said the same thing Toyota told me ( that everything looks good). I mentioned to them that my neighbor has the same car as mine and his coolant isn’t passed level “ low “. He then showed me some information on the car’s display screen suggesting the coolant is fine. I told him I still didn’t feel comfortable with the coolant low level. So he said I could flush the coolant if I want them to. I told them I would think about it. Then I reached out to Toyota again and told them what Lexus suggested. Toyota then said the best course of action regarding my concern is to perform a diagnosis to check where the coolant is going, to rule out possible leakage, which costs $152.

I’m guessing the coolant level in the reservoir was higher after driving for an hour, was it still below the “low” level?

Toyota then said the best course of action regarding my concern is to perform a diagnosis to check where the coolant is going, to rule out possible leakage, which costs $152.

A loss of 12 ounces in 5 years is not a concern, it evaporates.

You have visited a Toyota dealer and a Lexus dealer, twice, and you have not purchased a gallon of coolant?

When did you have the coolant last changed? Is it about time for that?

The coolant level remains the same after driving 1 hour to and 1hour back from Lexus. It doesn’t seem to be fluctuating.

As for buying a gallon of coolant, I prefer someone professional to work on the car due to my medical condition, as well as lack of car knowledge. I can only drive.