Today I read an article on Yahoo news that Mercedes is experimenting with a setup on one of their cars that camouflages it enough to make it appear “invisible”. The system uses LED’s and cameras, and adds about 1,100 pounds to the car, and only costs $263,000! (LOL). I wonder if anyone else has read the article yet? I think it must be a joint venture between Mercedes and the Klingon Empire. :-))

That explains why it’s so expensive.

If one of these MBs got hit, it would be the first time in history that the other driver could say “I didn’t see him” and have an actual excuse for not seeing him! Mercedes slaps sheet of LEDs on the side of an F-Cell, turns car into a...

It's not often that folks want to hide the fact that they're driving a Mercedes, what with plenty of them being among of the finest motorcars on the road. Howe...

It’s just an advertising campaign, and as you can see in the pictures, you can still see it (not that it would be a safe thing to do on a road car).

They’ve actually been working with cloaking devices for quite some time. Here is an invisibility cloak prototype that made some waves something like 10 years ago: 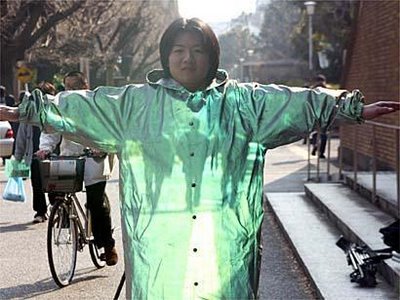 This is the forst I’ve seen of a commercial application for the LED based systems, but there is a lighwave bending cloaking technology that the military has. It’s not in use that I’m aware of, but it does exist.

Imagine if you will a tank with a quiet turbine engine, rubber tires (quiet), and cloaking technology. What a weapon that would be.

Not having to see Mercedes cars on the road would make my days in southern California so much better.

And who said the Romulans didn’t know what they were doing ?

"the same mountainbike 6:54PM Report
This is the forst I’ve seen of a commercial application for the LED based systems, but there is a lighwave bending cloaking technology that the military has. It’s not in use that I’m aware of, but it does exist. "

Is that because it can’t cloak anything the size of a peanut, or am I thinking of something else? And is it light or microwaves?

Speaking about useless devices when people buy a Mercedes for the " look at me" factor. I can see uses for drug runners, cheating on spouses, high security and parking in area with frequent vandalism. It would look funny seeing a dog " crank up" against nothing at all.

First, this doesn’t exist.
Second, because it’s a commercial.
Third, look at this to see how much it sucks.

The Mercedes applied cloaking system? You have visual evidence as well as a complete technical explanation.

The light bending technology? You have Google. New metamaterials (nanotechnology) has developed flexable materials that can bend light around objects, moving the image of whatever is behind the object to in front of the object. I’ve personally seen video of this applied to military rolling stock and it works. And yes, a troop carrier is larger than a peanut.

Littlemouse, if you believe that only the technology reported on in the mass media exists, reading trade magazines like Design News and military hardware magazines would be a revelation. And even THEY don’t present an accurate [icture of what goes on in classified programs.

Is any of this perfect? Nope. If you’re aware that the object is infront of you and you’re looking for it you can detect visual anaomolies. But if you’re not aware of it, the advantage it provides in stealth is invaluable.

Consider this technology analogous to other technologies that the general public is aware of. We know that we can download images from satellites good enough to identify our own homes. Amazing stuff. But the military has real time satellite images that would astound you. It’s the same with cloaking technology. What the public is aware of is no where near what’s actually been developed.

“First, this doesn’t exist.
Second, because it’s a commercial.
Third, look at this to see how much it sucks.”

I’ve never seen three contradictory statements before. “It doesn’t exist” would seem to cover everything !
Why “it’s a commercial” and “it sucks.” ?

I can still see his head.

Definitely not a stellar example of stealth technology!

It’s like in the movie Predator. In a city street not too effective. But in a jungle environment…Might actually work.

“I can still see his head.”

I can still see his green raincoat.

As for the car, all I see is a car-shaped sign that can’t be driven because you can’t see out the windows. It’s not “cloaked” it’s an electric sign.

It seems that paint manufacturers have done a lot of work with the pigments so that under different light conditions, cars can look dramatically different. I don’t think it’s a stretch to someday see paints more environmentally adaptive for a more camo effect. Marine patrol boats use different color schemes that seem to make thir boats blend with the water at the water line and a deaper color higher to match the shore line, making them tough to pick up, especially at dusk. They seem to come out of no where to just to check your life jackets.

But, I agree here, that it’s more of an exercise to make an advertising statement then a practical solution to a problem that doesn’t exist. But then, most really cool inventions that become common place and accepted seem to start out that way. Personally, I rather traffic disappear from hearing.