I had put fuel into my 2007 Hyundai Tucson on Wednesday night. On Thursday night I noticed my “check engine” light was on my drive home from work. I checked my gas cap to see if it was loose (didn’t seem that is was), but I opened it and closed it back up just in case. On Friday, during my commute to and from work, I noticed that the “check engine” light was still on. I went to my local AutoZone today to have them do the free diagnostic text on my vehicle. The result(s) is/are attached here in my post. 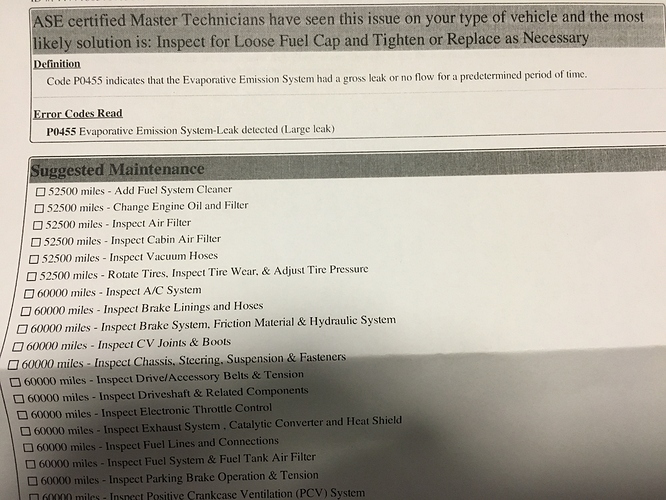 I don’t think it’s a loose fuel cap as the test shows. What else could this be? My vehicle has 45,398 miles on it and I mainly use it to commute to and from work. My father says that unplugging the battery (battery is new – bought it on January 14) and then re-connecting it to see if the “check engine” light goes away. If it doesn’t, then the gas cap probably needs to be replaced.

You don’t refuel your vehicle with the engine running?

Why?
I’ve been doing that since…ever.

… because it causes the vehicle’s evaporative emissions system to be… confused… and to result in a glowing CEL.

On a totally serious note, it is also possible that the gas cap’s gasket has become damaged/degraded. If the CEL doesn’t extinguish itself after several drive cycles, I would suggest that you give some thought to replacing the cap.

And… don’t try to save a few bucks by buying a gas cap at Autozone. Instead, pay the full freight for an OEM gas cap from the Hyundai dealer’s parts department.

Several reasons to shut your engine off when refueling.

The evap system keeps the fuel vapors inside the gas tank, rather than polluting the air. It’s a fairly complicated thing, b/c it must allow air in to replace the gasoline that’s used as you drive, and it must prevent fumes from leaking out, especially when you fill the tank, which leaves less room for the fumes. It does that by moving fumes into a charcoal canister for storage, and later burns them in the engine. So there’s a bunch of tubes & valves and solenoids which direct the fuel vapors here and there The car’s computer tests that system from time to time to make sure it is working. Not sure how it is done on your tuscon, but a common way is the computer pressurizes the system to a certain psi and monitors it to see if the pressure holds or not. If it doesn’t hold, it turns on the CEL. One place a leak can occur is the gas cap.

There’s usually a rubber type seal on the under-side of the gas cap. Check that, maybe it has cracked or become displaced from where it is supposed to go. Especially if you really cranked down hard on it, trying to tighten it more. You could try wiping a bit of oil on the seal too, might help it seal better. There’s usually a pressure operated valve inside the cap that you can’t see, and that can leak too. The only remedy for that is a new cap. As you might expect there’s a bevy of places a leak can occur, but since this happened after a fill up focusing on the gas cap seems reasonable. A car repair place will be able to figure it out if the cap isn’t the problem. Be sure to give the computer enough time to stop complaining. the problem could already be fixed, but the computer hasn’t done the test to verify that yet. So as long as the CEL isn’t flashing, give it a week or so of normal driving before doing anything drastic.

The advice above to not run the engine as you fill the tank should be followed. It might not appear so, but the computer has to do a big job of opening and closing valves as the tank is being filled to make sure the fumes move into the canister properly. Running the engine could prevent that from happening, and damaging components in the evap system, like the canister. It’s a pretty expensive job to diagnose and replace a canister, so best avoided.

I’m late and you must have repaired your car by now. My same issue lead to replace the intake manifold after 2nd code P200A.