This summer the carb on my 13 hp Briggs rider stuck open and allowed 1/2 gal of gas to drain into crankcase.
Today my 5hp snowblower did same thing. All the gas drained into crankcase.
Is this possible on 2 separate motors?
Sabotage?

By B*** and his Ethanol sabotage? Could be.

Or you sabotaged yourself by letting old gasoline hardened debris clog up the needle valve. I had a piece get sucked up in to the jet and it wouldn’t run. Same thing happened on a 4 wheeler.

I found idle screw to be 4 turns out when I took carb apart on rider.
Supposed to be 2-2-1/2? Maybe due to vibration?
Blower is chineseium powermore. Carb is 2 yrs old? Lowe’s special.

I guess you’ve proved it is indeed possible! … lol … I have this same problem on my Sears lawmower’s Tecumseh engine from time to time. In my case the gas drains onto the garage floor. Carb inlet valve gets crudded-up and won’t shut completely. I can usually free it by a shot of carb cleaners sprayed right on the valve. Usually however I remove the gas tank and pour a dose of carb cleaner down the hose from above, seems to last longer. Then I clean the tank. YOu’d think I’d be smart enough to install a fuel filter in that path, but you’d be thinking wrong … lol …

I’m not sure where the crud is coming from. It’s gritty so likely from dust created when mowing. Somehow dust is sucked into the gas tank seems most likely b/c there is indeed grit at the bottom of gas tank, but could be coming into carb from elsewhere too.

My truck’s carb has opposite problem sometimes, fortunately rare event, but if inlet valve stuck shut, not going anywhere.

Used blower 2 weeks ago. Ran great. Today it was blowing black smoke and barely ran faster then idle. Took off oil fill cap and a thin blackish liquid was splashing out. What the bleep?

Idle screw isn’t supposed to be a specific number of turns out, that’s just a starting point. It’s then adjusted to get the best idle from the optimum air/fuel mix.

Your stuck float draining the fuel into the crankcase is not unusual. Same thing happened to my motorcycle. It’s not even necessarily debris in the float, it could just be that the needle and seat assembly in the float bowl didn’t seal well. Sometimes that’s debris, sometimes it’s a hardened bit of neoprene on the needle from ethanol, sometimes it just get’s jammed from a hard whack, and sometimes the float has sunk.

No real mystery about it at all. It’s just a not-that-uncommon failure.

On mine there’s a path from the carb to the outside, that little bulb used to prime the engine on a cold start has a small hole in it. It’s there on purpose, not a tear.

Do you think the gasoline gets into crankcase by overflowing carb and into the cylinder via the air/fuel path, then past the intake valve, then past the piston rings?

Like I have said mucho times, I only use the non oxy gas and also use a conditioner without fail. Used b&s until they quit selling it and now use Walbro brand. Smells like perfume which I could do without. I haven’t had a float stick but I did have a jet on my generator all clogged after one year before switching to non oxy.

The only other thing is some have a shut off valve or solenoid that they have had trouble with. Taryl fixes all has a YouTube on it.

Actually I stock jets and carb kits and even a spare carb for the blower but has been years since I’ve needed them. Had the blower out twice today and heading for a third time. Best snow man snow I’ve seen in a long time but lemon pledge reduces the chute clogs.

IMO, manufacturers of the carburetors are just not building in the
quality as they did 20 years ago. My lawn mower of 20 years ago, B&S two cylinder, no problem. Replaced it five years ago with an allegedly better Kohler powered mower. Hydro locked with gas. Two gallons flowed into the engine, pulled the spark plugs, cranked it, raw gas squired out, then drained the crankcase, got over a gallon of gas/oil mixture.
I installed an in-line shutoff valve. When done mowing, turn the valve off while mower is still running, let it run for an additional 30 seconds.
The mower has always been run on nonalcohol gas.
If I outlast this mower, I will seriously consider electric. Have been very happy with my battery powered leaf mower.

BTW, this thread may get shut down as mowers are not cars, just as a thread concerning an outboard motorboat was shut down.

If we can keep it on carb theory? Blower is 8 yrs old? Carb is 2 yrs old. Made with unknown quality rubber bits?
Put new oil in this morning. Did 1/2 my drive. Seems ok

I’ve never had these problems with ethanol gas. One thing I always do at the end of a season is to shut off the gas to carb/engine. Then start mower or snowblower until carb is drained of gas. My mower is now 22 years old. My snowblower is over 10.

Why the question marks.
My answer to carburetor question—lower quality carburetors.

As far as blowers—I will have to see if there are blowers for my mower, more power, of course Tim Allen drove a mower with a jet engine. 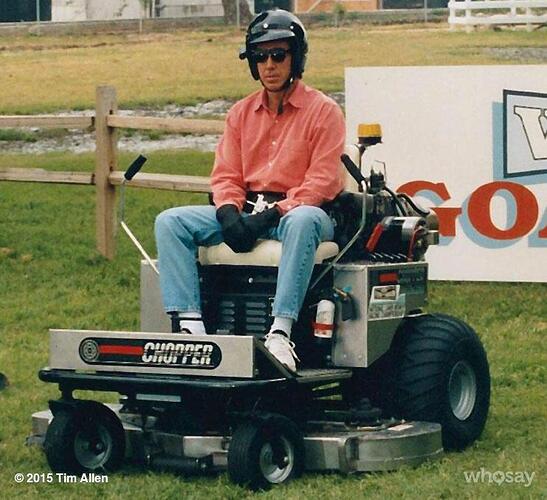 this thread may get shut down as mowers are not cars

Ray and Tom discussed listener’s lawnmower problems a few times on their radio program as I recall. IMO diy’er repairing small engines and bicycles are a good way for newbies to begin a diy’er hobby , eventually working up to fixing their cars too.

You can learn a lot working on small engines. Think I was 8 or 9 with my first one. Fuel, spark, timing, oil changes, broken bolts, head gaskets, wrenches, etc. just a smaller scale. Bought a like new engine for $5 at the bike store. I was maybe 10. Wouldn’t start. Neighbor dad discovered timing marks were off. Someone took it apart and ignored the dots. Learned about timing.

My 8 hp Airens snowblower was a 1972 I bought used in 1990. I never had a stuck float. It ran well until it was sold this year with the house. I always drained the tank and ran it til it quit. In the 32 years I owned it I did have to clean crud out of the float bowl 2 or 3 times.