Car runs like velvet, but "occasionally" will crank and starts poorly (either in hot or cold days)

The vehicle runs properly and starts on the second crank, but occasionally it will crank longer (10-15 cranks) and then it barely catches. I have to give it some gas and rev it to 2000 for a brief second before all is back to normal.

I thought it only happened on cold mornings but lately I noticed it a couple of times on warm days. I also notice that when started and until it reaches operating temperature there is a subtle but unusual harmonic (vibration) at around 1100rpm that goes away at any other engine speed (could be totally unrelated).

Otherwise, when warmed up the car runs like velvet.
Currently I am at a loss. My next guess would be the distributor (which I already disassembled and cleaned a year ago) might be getting worn out electronics … but if it was the distributor the car would be acting up all the time including cutting off while driving (which it never does).

I thought any air/fuel mixture issues would have been resolved by replacing so many of the sensors. Some suggest the crankshaft position sensor (but this car doesn’t have one. I thing they started using them 1995 and on). Also, I can’t imagine the air temp sensor causing all this all by itself (it is not anywhere near the engine to be getting worn out by heat deltas over the years.)

About all that’s left is cap, rotor and wires and check the ignition timing

I didn’t see "fuel Filter on that list.
Also check the coil and distributor cap for cracks.

Great car. Good for you for keeping it on the road. I’m guessing the problem is the dist cap/rotor/plug wires. If those haven’t all been recently replaced, try that. You could try the experiment where you watch the engine at idle some night when it is pitch black, looking for sparks. Might find something that way. After that, engine air filter, fuel pressure hold test, compression check, and the cat. One thing you’ve got going for you, no AC and no PS, so everything left is very easy to work on.

Distributor? Will do. Thanks !

I replaced the fuel filter at the 150k mark … even though the manufacturer claims it is a lifetime part (meaning they expect it to go 500k or so). I am thinking if it was the filter, it would stress the pump at all times and change the engine behavior across the board, but it doesn’t do this. I will keep it in mind if the cap doesn’t do the trick. Thanks for this suggestion !

I never thought of that one. Would this mean the vehicle would crank but wouldn’t start at all? The thing is, the engine actually catches but runs poorly for three or four seconds at such low rpm that it wants to stall.

That’s a good roadmap. Thanks George !

Yes, this little car is not the sexiest, or the fastest (it is actually the slowest) but it is still my pride and joy 25 years later. 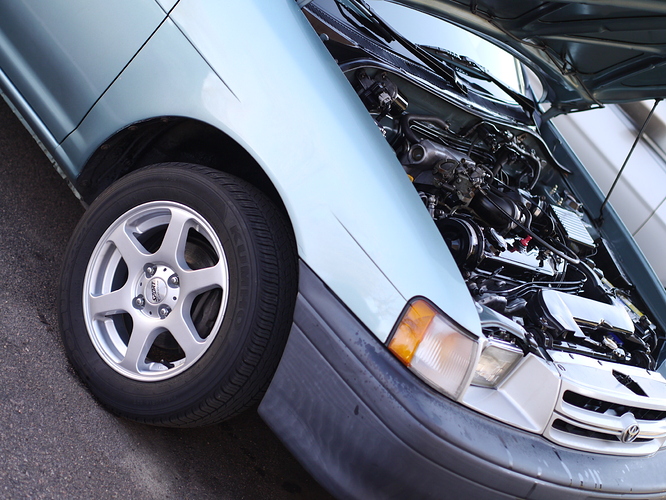 Any problem with a distributor cap or rotor means it is something that can be seen with the naked eye; as in cracks, carbon tracking, badly burnt cap terminals, etc.

Have you given any thought to the possibility of a vacuum leak? That can cause more of a problem during cold engine running as compared to when it’s fully warmed up.

I’m not a fan of visibly checking for a leak. I use a vacuum gauge and to some extent a smoke machine.

Yes, the vacuum leak possibility has been bugging me for a little while. I don’t have a smoke machine to test it.
Wouldn’t a vacuum leak cause permanent change in the engine behavior though ? (the car runs to spec 95% of the time, except the occasional rough-start/ near-stall once in a while)

Another poster here had an intermittent “runs poorly” and their problem turned out to be a tank located fuel filter. Gunk in the tank would sometimes clog it up, how much depending on how the bumps dislodged the gunk the prior trip. That particular car however was an Alfa R as I recall, and had been sitting unused for several years prior. Less likely for a daily driver like yours. But something to consider anyway.

Another idea is a sticking EGR valve. If it sticks open you’ll definitely get poor starting & idling. Connect a hand held vacuum pump to the EGR vacuum port at a time when the engine is idling ok. As you increase the vacuum the engine should begin to idle poorly then stall. If you release the vacuum before it stalls, it should resume idling normally immediately. Might provide a clue anyway.

George, thanks for the additional ideas!

Here what’s happening in those aspects:
a) I changed the fuel pump three weeks ago. The fuel filter is attached to the pump itself. The new pumps come with a new filter. So in this case the tank fuel filter has been taken care off. (the old filter was not clogged either, not that it matters now though.)

b) My vehicle doesn’t have an EGR valve. The EGR is found on the California emissions engine and I have the regular one. (Just to make sure, I am looking right at the EGR diagram on the Toyota shop manual pg EG-107 which is marked “California ONLY”. True enough there is no EGR on the engine itself)

The good news is that being non-California emissions simplifies matters a bit. Less things to check.

Waiting for parts to come in.
Will take a week for the distributor and maybe two weeks for an Air Intake Temp sensor.

I’m surprised your 93 doesn’t use an EGR valve. My Corolla is a year older than your Tercel. It has the 4afe engine configured w/an EGR valve on all models. The Calif EGR configuration is just a little different than the other 49 states. Calif EGR valves for the 4afe include a temperature sensor that modulates the amount of EGR opening, while the other 49 states get by without that extra parameter.

You can clean a defective Idle Air Control valve, but it won’t make it work correctly.

Yeah, I don’t even bother anymore. If I suspect something I just replace it. I plan to take this vehicle to at least 350k, it is almost fully restored.

Nope. No EGR here. It is also evident on the photo of the vehicle I posted above. The EGR would have been to the left of the throttle body manifold and there is nothing there.

Here is the shop manual: 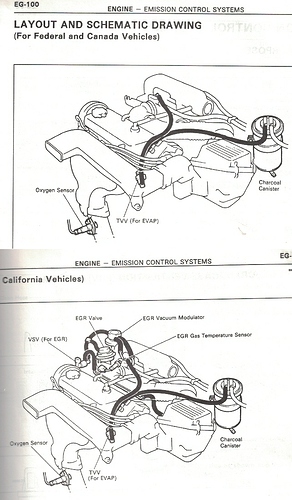 Yes, the vacuum leak possibility has been bugging me for a little while. I don’t have a smoke machine to test it.

Wouldn’t a vacuum leak cause permanent change in the engine behavior though ? (the car runs to spec 95% of the time, except the occasional rough-start/ near-stall once in a while)

Here is an idea on how to get your own smoke machine for $10: Paintcan smoker-Newest design - YouTube

I made my own like this in an hour. Resistance wire and wick can be procured off ebay or nearby vape store for cheap.

I thought it was only doing it on cold temperature, but two days ago it acted up while the sun was beating on it (probably around 70F).

Thanks for Youtube video, I am thinking though to just get a yard of vacuum hose and just replace them.