Car Only Starts when I Bypass the Starter Relay Fuse

My car is a 2005 Scion tC AT. It does not crank when I turn the key. If I hook up jumper cables same thing, no crank. I went through tests to see what it may be (and had help going through some of this with some guys on ifixit.com.) Using a Multimeter, I checked the basics to see if I had solid connections.I verified the solenoid, the starter, the alternator, the battery, the battery cables and etc. I then started to take a look at the fuses. They all seem to look fine (nothing appears burnt out). Somewhere in the starting system there is a disconnect. I decided to dive more into the Starter Fuse/Relay. I removed the Starter Fuse/Relay from the fuse box. I decided to ground the terminals in which the fuse is placed. I tried this and was able to bypass the Starter Fuse/Relay and the car started. I went ahead and got a new fuse/relay and when I put it in, the same thing happened. The car doesn’t crank at all. Knowing the old Fuse appeared to look in good shape, and a new one made no difference I ruled that out as the problem. My next thought was it is the neutral safety switch, if not possibly the ignition switch.

I’m assuming that since bypassing the relay, the vehicle is not getting positive voltage to the coil side of the relay. I learned if the neutral safety switch doesn’t think I’m in either park or neutral, it won’t send power to the relay. With that being said, I went to try and ground the NSS. My hope was with the Starter Fuse/Relay back in the vehicle, I could bypass the NSS and get the vehicle to start. My hope was to narrow down that the NSS was the problem. I wasn’t sure which wire contacts to jump for the NSS so I tried three combos for grounding the wires, all with no luck.

I was able to get the car to turn over and try to start (the battery has been sitting for awhile at this point and needs charged) by a combination of grounding the relay fuse (like I referred to in the beginning of this post) as well as the first way I tried grounding the NSS ( the first picture of me grounding the NSS connection at the bottom, everything else I did is also pictured.)

With that being said, it makes me assume the way I grounded the NSS was correct that time because the car did turn over when I grounded the Starter Fuse/Relay (so their clearly was a full connection through the starter system).

At this point I am fairly stumped. The fuse itself doesn’t seem to have been the problem, it appears to be in good shape and a brand new one didn’t help. Grounding the NSS without any luck makes me think it wasn’t the problem. If it had been, grounding it should have let the Starter Relay act correctly and start the vehicle (which wasn’t the case.) What else could be the problem? I am assuming something is keeping the relay from getting voltage to it’s coil side. What are your thoughts? Thanks! 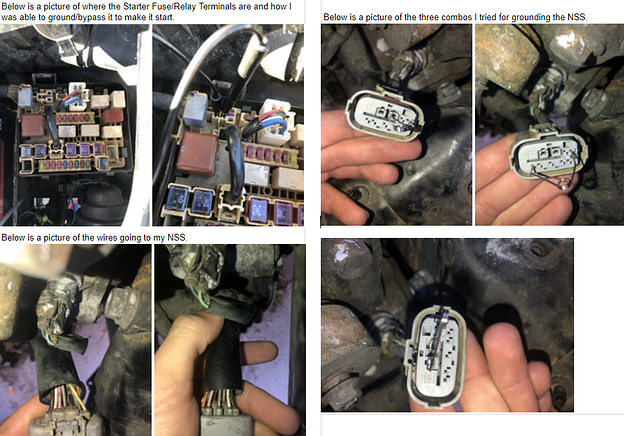 Plug the neutral safety switch back in, shift the transmission into neutral and then try starting the engine.

I’ve already tried that with no luck. Any other thoughts?

Shift the transmission into reverse.

Do the reverse lights come on?

I am checking myself, but it seems clear to me that they do not turn on.

The park/neutral safety switch is also the reverse lights switch.

I will try that and let you know how it works, thank you!

Measure the voltage at the two electrical terminals connected to the starter. One is a thin wire, one is a thick one. Both should measure at least 10.5 volts during attempted cranking. If both do, and it doesn’t crank the engine, then the starter is probably failing. If one or both don’t meet that voltage test, work backwards toward the battery to find out why. If you replace both the starter and the battery I expect that will solve this problem. The fuse/relay involvement is a symptom, probably not the cause. You may have a shorted coil in the starter motor solenoid for example, which could cause this symptom. That’s part of the starter motor ass’y.

When I bypass the starter fuse/relay the car turns over like a charm no problem whatsoever, the starter does not hesitate. I tested all the wiring and voltage for the starter and the solenoid and those things you mention and they’re fine. The battery works fine when charged/jumped. It’s just been sitting for a few weeks. I’m sure the disconnect is the NSS like Tester said. All lights work great and bright, with the exception of zero lights for the reverse.

Both the ignition switch (pins 7-8 and 2-1) and starter relay contacts (pins 5-3) must measure a resistance of less than 1 ohm during the “start” function. You might try bridging the neutral safety switch as an experiement also, as if that resistance is too high you’ll get uneven operation of the start function. However, if those resistances are too high the voltage test I mentioned above usually wouldn’t pass.

I have a 90’s model year Corolla and have battled crank problems several times over the years. I’ve had to solve problems with both the ignition switch resistance and with the safety switch resistance, in my case it was the clutch safety switch, but same idea. Even w/those problems solved no-cranks recurred from time to time, all due to either the battery, battery connections, or the starter motor ass’y. The last time I had the fails to crank problem I determined that the ignition switch and safety switch wasn’t the cause, so I replaced both the starter motor and the battery. One problem, the aftermarket replacement starter motor failed right out of the box. So I took it back and installed a Denso unit and the Corolla has cranked right up perfectly ever since.

Thanks for the response George! I think it may be the NSS, however I could foresee in the future having issues like you did have occasionally. At that point I would assume it is a bad battery (since it would be even okder). Regardless, that is all very useful info to if the NSS doesn’t fix the problem, AND even if it does. Thank you!

Best of luck. Keep us informed of your progress & what you discover. Your follow-ups will help here, and helps others with a similar problem reading this thread.

Here’s an update: I had someone else run through the lights with me to make sure. It appears that none of the lights on the rear of the are car working. They all worked fine before my car had this issue. Only my Headlights and Brights are working in the front. I checked all of that while I was hooked up to another vehicle (for an extended amount of time) so the batter isn’t the culprit. I just wanted to get your guys’ thoughts in case that could also be connected to the issue as well as to see if it means the issue is something other than the NSS. Thanks!

Is there a chance that the Starter Solenoid would be the issue?

Hey did u ever fix that problem?

I have the same problem did anyone figure out the problem