Can I change the CV Joint on my 2007 Durango front driveshaft? If so, how do I R&R the joint?

My question is specific to the FlexFuel version of the 2007 Durango with 4-wheel drive and 4.7. I have a vibration that I am 99.9% certain is in the front driveshaft.

Since I changed all the u-joints in the drivetrain (front and rear driveshafts) the vibration is almost gone. But, there is still some vibration at the same frequency that comes up at around 60mph. I can only imagine that the CV Joint in the front shaft is the culprit. Please, someone correct me if I’m wrong. That said, I can’t see any way to open up the CV Joint to work on it. There are no bolts to remove the dust boot. I might assume that the shaft is only available as an assembly like some other parts I’ve seen on this vehicle (a leaky steering gear comes to mind) but I can’t imagine having to replace the whole shaft if the dust boot gets damaged. I have found rebuild kits for other year models but am unable to turn up a kit that shows it will work on the 2007 model. Not that it matters if I can’t remove the joint to begin with. Does anyone have details on this build? I could sure use them since I don’t want to tear it down again then find out I have to order a shaft assembly to finish it up.

diy’er, no Durango experience. I presume this truck is true 4WD, configured w/transfer case and front/rear differentials, but (unlike my truck which uses a solid axle design), the axle shafts on your Durango which go from the differential to wheel use CV joints. Also presuming no boot tears.

If so, first step is to go to the underside safely, grab hold of the axle shaft and see if you can twist (rotate) it by hand. You should feel little to no play doing that experiment.

As far as CV joint repair, uncommon these days. May not even be possible b/c of the way the CV joint is designed. I repaired (removed, cleaned, and re-lubed) CV joints on my 30 year old Corolla and older VW Rabbit, but by the next Corolla model, the CV joint design changed and couldn’t be easily removed from the axle-shaft, and the only practical repair method available is to replace the entire half-shaft. Likely the same holds for your Durango.

You mention driveshaft. That is the part from the transfer case to the front differential, usually uses u-joints, not CV joints. Is that the part you actually mean?

Yes, this diy’er is not without experience. I’ve been a mechanic for most of my life but this is the first time I’ve had to work on a driveshaft (not an output shaft or CV axle as you’ve described) with one u-joint (at the front differential) and one CV Joint on the transfer case (an NV144) end. The Dodge Service Manual calls it a “single cardan system”. The rear shaft has the traditional two u-joints configuration. Further, as I mentioned, I have had this shaft out in the past, to replace the u-joint. It’s a bit of a mind bender because I couldn’t feel any looseness in it at all. But, I went ahead and replaced it because it didn’t rotate smoothly. When I got it apart, the needle bearings were packed with rust. Once I got all 3 u-joints replaced, the vibration was reduced almost completely to zero, but again, as I’ve said, it is now showing up at around 60mph.

I did find a video on youTube where a guy did what I was hoping to be able to do here who had found a rebuild kit for it and it was packed with rust like all my u-joints were. But, his Durango had an NV244 (not NV144) transfer case. I see rebuild kits all over the internet for pre-2007 Durangos and some for post-2007 models, but none for the 2007. That, coupled with the fact that there are no bolts holding it closed is the reason I’m taking this time to see if I can learn more from others.

You clearly know much more about your truck’s configuration than I; As far as my own experience, I’ve never had a front driveshaft problem with my 50 year old truck; 4WD mode not used very often here in San Jose (free running front hubs in 2WD mode, front driveshaft doesn’t turn). But have had problems with rear driveshaft on occasion, usually the one you describe, u-joint needle bearing rusted, creating play, jolts, bumps, thunks. Initial symptom never has been a vibration tho, instead squeaking noises, heard most easily at about 30 mph, esp when sound reflected from nearby wall or van. I’ve learned from experience whenever I hear the squeaking noise to immediately lube the rear driveshaft u-joints and the slip joint, so haven’t had to replace any u-joints since doing that. This happens fairly frequently, every 5-10 K miles.

My truck has the double-cardan configuration in the front section of the rear driveshaft. It requires a special grease gun fitting, usually easiest done by removing driveshaft and lubing on the work bench. Suggest to remove front driveshaft and test for any play in the u-joints on the bench, and make sure all the places it needs lube are getting lubed.

No one here is being helpful. Me either. I suspect none of the mechanics here know either, but I’ll boost it to the top anyway.

No one here is being helpful

Are you saying talking about a 50 year old truck is not helpful ?

What I do is, look on Rockauto to see if they sell a component that allows the repair of an assembly.

This appears to be the best answer available. I have been to RockAuto amongst a host of other sites and I didn’t find any kit for the joint or joint by itself. Tester, your image does appear to be of the shaft that fits my application. I can’t pay for a new shaft so I guess I’ll have to try my luck on a used one from a wrecking yard.

Thanks for the responses.

Follow up: Changing out the shaft with one I got from a yard in Minnesota killed the vibration I was having. But now I have other vibrations and noises to figure out, chuckle small wonder, huh. The new one will take me a while to find words to describe, but it is definitely different from the original because while it picks up around the same speed, the character of the sound is different and it fades out around 65mph. At least now I feel like I can drive at freeway speeds.

Drive-shafts have to balanced to the truck, otherwise may incur vibrations. Ford service manual (in my truck’s case) suggests to always replace a driveshaft in exact same orientation it came from the factory. Don’t change the relationship to the transfer case and differential yokes in other words. You could try experimenting installing the driveshaft with different orientations, may or may not help. But pretty easy to do, so worth a try. If all else fails there are usually specialty shops in metro areas that specialize in drive-shaft balancing.

I may look into that. Thanks.

Maybe I should have entitled this thread with something more like, “Gen2 Durango Driveline Vibrations”. I’ve learned that there are no shops (in Arkansas, at least) that can balance a driveshaft while it’s on the vehicle. I’ve also learned that a worn output shaft bearing can cause a driveline vibration too. Enter next chapter.

Note to moderator: Worth relisting perhaps? I have been hunting information on this for some time (not only on CarTalk) and have not really found any definitive articles or threads. It was on a guess that I managed to solve the original vibration issue by changing the u-joints. I couldn’t tell if there was any slack in them because of the rust that was caked up in them.

Not a Moderator but just leave this as it is . Another thread or changing the heading might just conplicate things .

Drive-shafts have to balanced to the truck, otherwise may incur vibrations.

Never hear this before, I thought they were balanced of the vehicle.

Ford service manual (in my truck’s case) suggests to always replace a driveshaft in exact same orientation it came from the factory. Don’t change the relationship to the transfer case and differential yokes in other words.

This i have heard.

Never [heard drive-shafts are balanced to the truck] before, I thought they were balanced [off] the vehicle.

They come from the manufacturer balanced to the truck. Otherwise there’d be a vibration when the truck was new, right? As long as the various u-joint and slip joint & yoke orientations aren’t changed, and worn parts are replaced, it should remain balanced. I’ve always maintained those conditions on my truck, so never had to investigate how driveshaft’s, if they get out of whack, are re-configured in a balanced configuration.

If the driveshaft wasn’t balanced to the truck new, it could go on in any orientation, then there’d be no reason for the manufacturer to say to never change the orientation.

Just on a car but I was told to mark the driveshaft orientation when doing u joints.

My guess, drive-shaft balancing specialty shops balance a problematic driveshaft as best they can removed from truck spinning it on their test fixture. Then they experiment which installed orientation produces the least vibration. If the only variables are the front and rear yokes, they only need to try 4 different orientations.

Me too. The Dodge Service Technical Manual I have says it as well. But I’ve never heard of it until now. Perhaps it’s part of a way to help ensure that our quest to track down driveline vibrations are successful … or maybe it’s just an industry joke for newbie DIY’ers. (Like “Check the driveshaft” in that '72 Eldorado over there or “Change the coolant” in that '65 Beetle or Corvair.) The same manual does, however, describe a method of balancing the shaft (on vehicle) using a pair of hose clamps installed snuggly around the shaft. I’m guessing this is what George is thinking of. I did manage to turn up a youTube video detailing a method of doing so using a bracket attached to the differential housing. 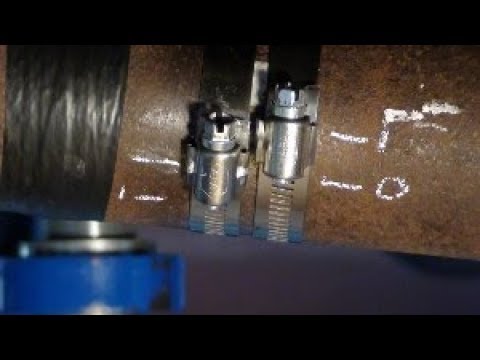 There were also a few videos showcasing the use of a handheld device that appeared to work like something akin to a tire balancer. I’m sure it’s safe to assume that a serious driveline shop would have one of these.