A survivor. As a kid I had a friend that at the least indication of an issue would wet his pants. He said he just couldn’t help it. So when the rest of us would jump over the fence being pursued, sure enough he would be wet. One reason I guess for sky diving alone or without pants on. I don’t know if he outgrew it or not.

Skydiving has got to be the biggest thrill I have ever had. It’s a feeling like no other. I did it with a group of friends and 3 of us absolutely loved it, the 4th guy said “well I’m never doing that again.” But for me it was worth every penny.

I would do it again in a heartbeat. But, 15 years ago I barely made the 235lb weight limit. Now I’m 30lbs above that, so it will have to be something that I remember fondly.

But speaking of going fast…the other night at dinner I asked my 15 year old son if he’s been taking the bus home from school or getting a ride from a friend. He said his friend drove him that day, and they hit 110 on the way home. Sigh. Later that night I told him never to say anything like that in front of his mother.

Pretty impressive, you’ve got my respect.

I used to think about skydiving. I would have done it 40 years ago if I’d had anyone to do it with, but I don’t bounce that well anymore, so it’s never gonna happen now …

As asemaster said; it’s a feeling like no other. The chute opening was a bit of a downer as it went from 120 MPH to about 12. Hang glider would be great but nothing around here but ant hills.

Several of my kin were likely questioning my sanity as I’ve had 19 surgeries, need 5 more with 3 being inoperable and the other two a coin flip. Plus that annoying little DOA incident back in 2018 and a step away from it 5 more times. I asked the doc and he said go for it with the only problem being if the chute failed to open.

The instructor and jump partner in that pic has 8000 jumps and he hasn’t augured in yet so I figured it was a safe bet.

Hang glider would be great but nothing around here but ant hills.

You get towed up by a plane in a tandem situation. Cliff launches are for singles. All you need are thermals to stay up there and any farm fields will have those under most circumstances in the summer. Otherwise, you get what is called a sled ride back down. Still amazing. I used to do them in the plains area of Wisconsin and you could get an hour or two in the air or 15 minutes depending on conditions. We get attacked by hawks sometimes. They dive bomb the kite, actually hitting it, trying to drive this strange invading creature from its hunting area.

I used to help my brother cliff launch. The wind coming up the cliff face circles back and around to try pushing you off the cliff. Holding the kite back is thrilling as it drags you toward the edge. The guy with the kite on is less concerned than the two guys on either end struggling to hold it back for the right moment to step off…

A casual acquaintance many years ago went out into western OK and did a solo leap off of a 100+ foot tall flat mesa with a hang glider. The problem was that he wore glasses for vision problems. Just as he hit the edge his glasses fell off and he plunged at a steep angle rather than sailed. Broke both legs up pretty badly, had full leg casts, and had to use crutches later. Maybe should have used Gorilla Glue on the glasses. Luckily, he made a full recovery but it took a long time.

Interesting about the hawks attacking. I never knew that.

I wonder if anybody has took off from a cliff-top or mountain-top on a hang glider and got into a severe uplift that put them so high up that the air was too thin to remain conscious? It seems like that would happen from time to time, but I’ve never heard of such an incident.

Easy cure for too much altitude - descend.

Thermal updrafts are usually not very large in diameter. Like bubbles forming on the ground until they let go and rise. So exiting one is not that hard to do. In fact, staying in one is sometimes harder to do especially as any winds tend to push them around. Watch the hawks and how tightly they circle while rising in a thermal.

Thermal updrafts are usually not very large in diameter. Like bubbles forming on the ground until they let go and rise.

I guess they are sort of like rip-tides and undertoe. If not aware of what’s happening, a riptide can transport an ocean swimmer far from shore pretty quickly. However if the swimmer knows to not attempt to fight the riptide, but instead just swim parallel to the shore , pretty nearby there will be an incoming current that will bring them back to shore nearly as quickly.

Yeah lost a professor at one of the local colleges in a Florida rip tide. Nasty.

Maybe twin turbo knows how high you have to go to lose oxygen. Mt evens I think was 14,000 feet and I could still breath. Seems to me it would be so cold before that though you’d start to descend.

I went to top of Pikes Peak (Colorado), think it is around 14k feet, and noticed quite a bit of difficulty in breathing in enough O2, even just very mild exertion, like walking up 10 stairs, had to stop & rest 3 times, totally pooped out.

Oxygen depletion tolerance is variable. I used to visit Boulder CO for business, it’s elevation is about 5300 feet. I ran every day and never had a problem breathing. A few people I worked with said they had trouble breathing when in Boulder when just walking around. People from the Tibetan Plateau are genetically adapted to live at 14,000 feet and higher without breathing problems.

Speaking of speed back here on Terra Firma, NJ’s 10th annual Race of Gentlemen will begin in 5 days on the beach at Wildwood. 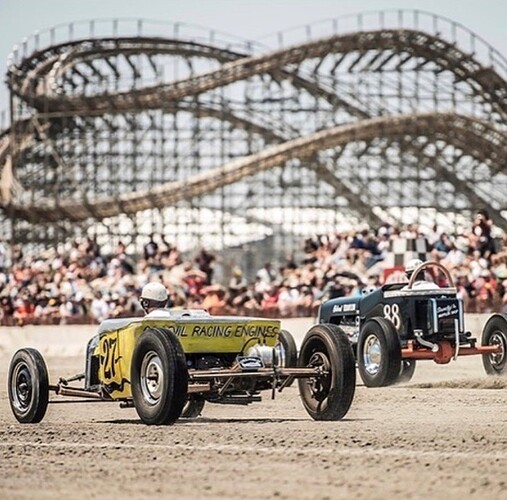 Spectators and racers alike will experience a simpler time of when guys were gentlemen and cars were king! 2022 marks the 10th Anniversary of this event.

When I was younger, I thought that might be cool, but since I live in Sacramento, and the only jump school near me is in about 20 miles away in Lodi, which has been in the news multiple times for having uncertified instructors and multiple fatalities, I think I’ll pass.

There was a fatality incident here and the cause was never determined. The FAA investigated and could find no solid cause behind it. Both the harness and chute were fine. The young lady (experienced) had slipped out of the harness somehow even though extra webbing had been added to account for her smaller size. She bailed out and disappeared. Search teams found her a 1/2 mile away in deep weeds and her chute was found 5 miles away. That meant she had a long time to think about it on the way down.

When I worked for Nissan we were outdoors hitting a local snack truck up one afternoon when there was a loud boom. That was the sound of a canopy being blown off of a T-38 Talon and both ejection seats being fired. The resulting fireball was a 1000 feet tall and we watched both pilots drifting south in that 40 MPH wind out of the north. One landed a 1/2 mile south and the other 1.5 miles south where his chute got caught on a utility pole. Four houses caught on fire and the only injury (a miracle in itself) was an elderly lady who got a minor burn when the explosion blew her patio door in and set her nightgown on fire.
The aircraft hit the ground nose first at about 350 knots and was a 1/4 mile from where we were standing.

I am amazed many times by the reality of things. A bud did a cross country bicycle tour. Now I thought 120 fee in elevation change for 5 miles was significant. Now think about 5300 feet. Very big it sounds like, but consider there are maybe 12 to 20 city blocks in a mile (5280 feet). When you think of vertical 12 to 20 blocks vertically it does not seem so high!

Now I thought 120 fee in elevation change for 5 miles was significant. Now think about 5300 feet

Russian commercial airliner some years ago, pilot – bad decision – allowed his teenage son to fly the plane, full of passengers. Teenager confused control panel, inadvertently turned off the wing part of the auto-pilot function. Crew didn’t notice or even realize that only certain parts of autopilot can be turned off. Airliner crashed, everyone killed, plane was spiraling down at 10,000 feet per minute.

I still didn’t get there, but I’m learning to fly in a prehistoric C150, so…

I don’t know if you are familiar with the great courses or not. Many subjects at college level with top professors. My latest is epic engineering failures and includes the 737 max. Bridge, building failures etc. and why from and engineering standpoint. Professor ressler taught at West Point and is very good. He’s big into math formulas though which I am not. I have several of his courses.