Bought a car today, how upset should I be?

Hi all, called a dealer about buying a demo car they listed online at 7,311 miles. Before putting down a deposit for the car, I asked the salesperson if there were any dings or scratches on the car. I was told no. I followed up by asking again, “so there is no visible wear, inside or outside on the car?” and the answer was no. I put down the deposit, and drove 3 hours to pick up the car.

When I got there, I found the car did have some paint damage, about four chips like the one photo I’ve uploaded. Also a small rip and a small stain on the interior. Also, the mileage was about 700 miles higher, or 8% higher than the mileage I was told and that was listed on the form I received acknowledging my deposit. I asked if they could fix the paint and stain. They did their best cleaning up the stain, but couldn’t get it fully out, and refused to ad the paint or give me a break on the price.

I’m trying to decide if it’s worth the energy to make a real stink about this — this was my first time buying a used car so would be grateful for any thoughts on how upset I should be. Thank you 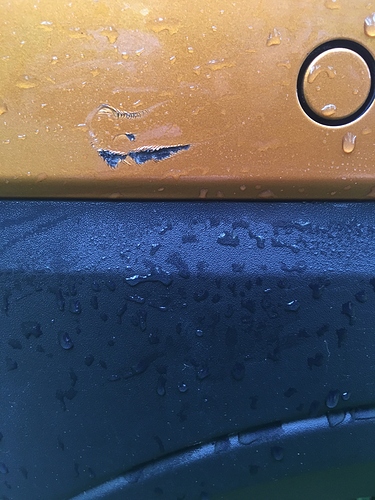 More photos, it’s only letting me post one at a time. Thanks again! 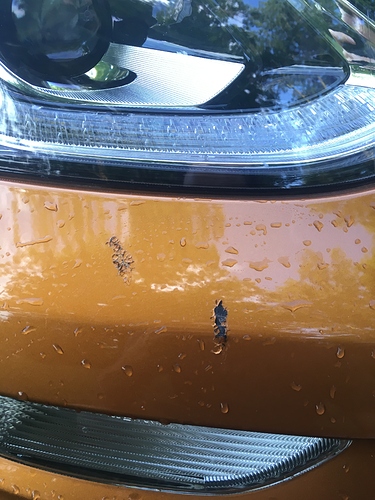 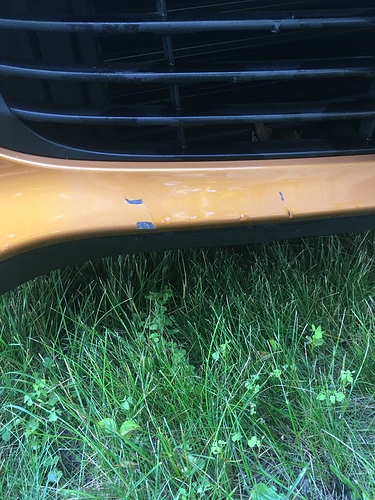 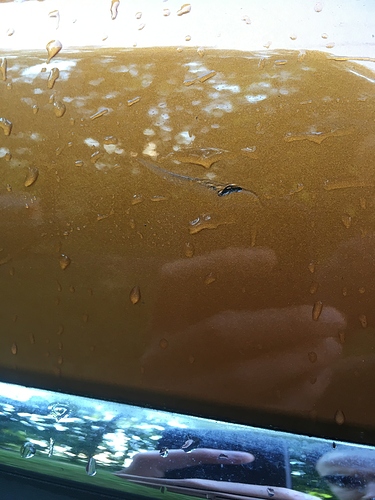 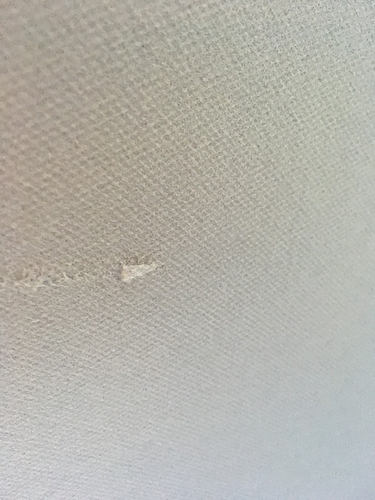 Did you drive the car off the lot? If you did, you own it. You drove there so I’m guessing you had transportation to return, that is the time you should have refused the car. They would try to tell you that you could not get back your deposit, but they would have had to return it if you refused the vehicle.

I would tell them “give me money back or I drive the car through your front window”. That’s just me and might get you arrested, so I can’t in all good conscience recommend that to you.

Thanks Keith, I did take it because I needed the car today and I’m planning on keeping it, now I’m just wondering if it’s worth filing a complaint with the better business bureau, writing a bad review on yelp and Google etc. I just can’t tell how upset I should be.

Ok sounds like you would be quite upset if you were me!

I was told and that was listed on the form I received acknowledging my deposit.

I am guessing that you are not going to spend the $$ to get those bumper nicks professionally repaired, but you can buy factory original color touch-up paint that goes on like fingernail polish. $20 and five minutes. The repairs will be visible, but from a distance it won’t be nearly as visible as those gashes.

How annoyed you have a right to be sort of depends on what kind of deal you got on your 7k mile car. If you paid nearly MSRP, then you certainly have a right to pen a carefully crafted review of their business on the Internet. If you want it to be effective, be sure you come off as thoughtful and fair-minded so your review is taken seriously.

Talk to them, give them the chance to fix it, was any of the car condition in text or writing?

The deal is done. If you didn’t like the car, you shouldn’t have bought it. I can understand needing a car in a hurry. But often times when we make rushed or hurried decisions, something has to be overlooked or sacrificed along the way.

Hope you enjoy the car otherwise. Dings and scratches shouldn’t mean much, really.

I have seen new cars come off the transport.with paint chips. A friend bought a new car back in the 1980s and found red overspray on the left rear quarter panel on a white car. The ovdrspray was only noticeable up close. He was quite upset and I don’t remember how he resolved the situation with the dealer.
Since the car was a demo and had gone 7500+ miles, the paint chips don’t mean much. I am sure you didn’t pay as much as the car cost new. In fact, sometimes a demonstrator is a good purchase because the dealer wants it to run well.

I might have my doubts that car was ever a dealer demonstrator. At the dealers where i worked they always tried to keep demo miles down under a 1000. Maybe this was a rental or lease return? Looks a bit rough to me for a demo.

I also wonder why blue paint is showing under the gold as I have never seen blue primer. I would have walked away from this one if it were me. You chose to leave with the car warts and all so I do not think you should complain to the BBB or raise a stink on Yelp, etc.

I also wonder why blue paint is showing under the gold

One of those detail/paint repair places could get that bumper looking like new again. I’m not talking a full fledged body shop, but one one of those businesses that ONLY take care of damage such as pictured here

Assuming the price was good . . . and it better have been, considering the mileage and the fact the car was a demo . . . I wouldn’t lose too much sleep over it. No offense, but that bumper would in all likelihood not have stayed looking showroom new for long, anyways

refused to ad the paint or give me a break on the price.

because it was already heavily discounted, I presume

don’t bother . . . you saw the car, the condition it was in, and you still forked over they money. The dealer didn’t try to hide anything from you, in my opinion

You saw it upfront and close in person. You paid for the vehicle. It is yours to fix, or not at your discretion.

The owner of the body shop I use had managed the body shop at a Lincoln-Mercury dealership. They had to touch up a lot of new cars when they came off the transport.

The oddity to me is the gold over blue. I get that ABS panels are molded at times in certain colors to match the car but gold over blue? The painted ones I’ve always seen were somewhat neutral colors such as gray or black. Never seen gold over blue, red over yellow, or whatever.

With the damage and miles I can’t help but feel there’s more to the story on this car. The salesperson has already blatantly lied, twice, about whether or not the car had any visible wear inside or out. Why not lie about the history also?
And the car got another 700 miles on since listing it; or in the 3 hours from the phone call? I tend to suspect the 700 miles was a lie from the get go as that would put the mileage over 8k. Why not knock 700 off and get it to near 7k? Sounds better…
For a demo someone kept that thing rolling…

I’ve only seen one damaged demo in my life and that was one a salesman took off to Tulsa in one weekend, got drunk, and pretty much trashed it from one end to the other. Broken windshield, caved in hood, grille, RF fender, bent suspension, 2 damaged wheels and tires, trashed manual transmission, broken dash, and a dozen other smaller glitches. He left the car in the mud where it got stuck, called, and said come and get it.
The car was so bad it was never fixed and became a parts donor.