Body work: Yes or no?

I have a 2011 Toyota Matrix S manual transmission with 64k miles on it. It is in great shape mechanically – I get it routinely serviced and it has never had a serious mechanical issue. However, it has a lot of body damage – front and rear bumper, front fender, rear passenger door and quarter panel and headlight – none of this was caused by one specific accident, rather a cumulation of damage, so I can’t put it through insurance.

My question: do I get it fixed or keep it as is? I don’t want to sell the car – I want to keep driving it. My main concern is that the rear door is rusting, so I foresee that being bigger issue in the future.

I wouldn’t spend a dime on body repair. Drive on

If there is rust only on the door itself, no worries. Ugly but structurally it doesn’t matter.

I will tell me my reasoning for this advice only if you ask.

Get the headlight fixed…the rest? I’m with @Mustangman on this one.

So rust really isn’t a problem? it’s also on the quarter panel – does that change things?

Rust is a problem but the body work that is needed is going to be very expensive and may not eliminate all the hidden rust . Rust never sleeps . Start saving money to replace this thing and drive it till it is no longer useful.
The headlight needs to be fixed and how did this thing receive so much damage ?

Have you stopped by a body shop to get an estimate and to see how bad they think the rust really is? If so, how much was the estimate?

Also, is this unusual amount of damage expected to continue? It wouldn’t make sense to fix it now and then have the car looking like this again within a year or two.

No, ignore the rust until there are fist sized holes in the rocker panels.

I predict this car will be long in the junkyard before rust is a structural issue.

Send us some pics of the damage.

Unusual amount of damage – none of it was my fault – lived in New Orleans for 4 years, a place where cars go to die.

In the process of getting an estimate 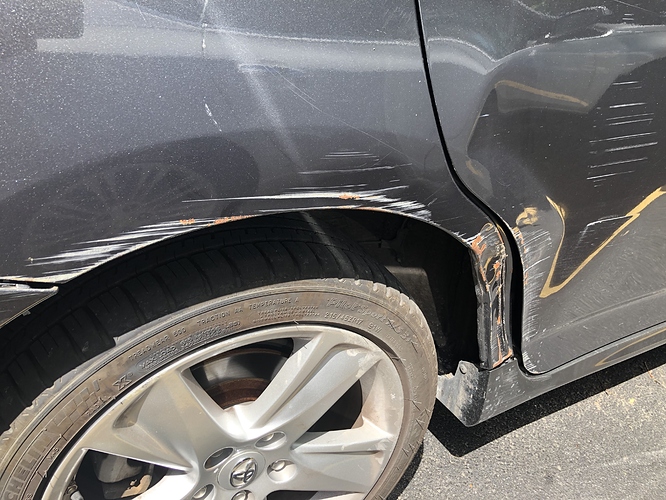 That is not bad at all.If It it was my car,I would buy some sandpaper,a can of Bondo,etching primer and matching aerosol paint and clearcoat. I could do this in a days work.Check for step by step tutorials on youtube…just google it. If you want a bodyshop to do the work,I suggest you shop around because prices could be steep.

That’s just surface rust. After you get the $3500 estimate from the body shop, maybe check around for a guy moon lighting out of his garage. Stop at a NAPA of some place that sells automotive paint supplies and ask for some references. That’s really not all that bad except for the door damage.

OK – thank you – there’s more damage, but I was only allowed to upload one picture.

This is all the rust though

Before you consider spending $10,000 on cosmetic repairs you might think about buying a newer car in better condition. Don’t worry about the rust, it would take more than 20 years for that to become a problem in Louisiana.

BTW, that does look like hit-and-run damage, did you get the address of the building that hit your car?

The best solution is to get a new fender ready for paint(black primer) and install it. You can drive around until you decide to get it painted.
Rockauto sell them for $127.For the door,get a touch-up pen from the dealer and cover the paint scratch as best you can until you are ready to paint the fender and doors together.
https://www.rockauto.com/en/catalog/toyota,2011,matrix,2.4l+l4,1447803,body,fender,1380

looks like the back door to me. a door swap is easy enough. repairing the quarter panel is harder.

I’d get some rubbing compound and go at it with a damp rag on the white streaks.
Sand the rust patches to bare metal.
Mask to just around the rust areas, prime and paint.

That’s an afternoon’s work with no costly tools.
Will delay the rust for a few years.
Just go to the auto parts and or hardware store for a couple rattle cans of paint, some masking tape, rubbing compound, and sandpaper.

Seriously though, a redneck like myself would remove an inner door panel, knock that dent out, and ride.

Actually a redneck like myself already has. On more than one occasion.

That sort of problem (as in the photo) can be pretty easily diy’er repaired provided you can live w/some imperfection. If you have a lot of damage like that, and you don’t want to diy’er repair it all by yourself, shop it around to some independent body shops. Explain you want to improve the appearance in a common-sense, economical way, but you will agree in writing beforehand you won’t expect the aesthetic results to be perfect. I expect you’ll get some reasonable $$$ quotes for all the body-work jobs that need doing.

If I had that sort of work needed doing I’d take a visit to the local community college that trains auto mechanics. I’d ask the instructor if one of their students wanted a minor body-work project that would allow them to gain some experience and at the same time earn a little income. If they student did a good job I’d give them a substantial tip too.

If you are looking to impress me he neighbors, it will be cheaper in the long run to get a newer car in better shape. Otherwise, drive it like you stole it until she gives up the ghost.