I was refused a blown turbo repair under warranty for my evo x mr. Took it to a shop my friend owns they changed it but they didn’t change the oil. I asked my friend if they changed it he said they should have. He answered me a day later and said they did not. So I told him I would be at his shop later that day. So while I’m driving to work I see a low oil pressure warning show and I pull over as soon as I can while that happens I hear noises that sound like engine damage pull over and the engine sounds bad. Details the oil had been under 2500 miles on it but it wasn’t changed in 13 months. The thing that made the oil leak was the blown oil filter gasket.Also when the dealer ran diagonstics for the turbo should they have indicated a need for an oil change? Not sure who is at fault here if I have a shot at court or getting the dealer to replace the engine. Who appreciate the input Tha k you.

One thing that can happen is, the by-pass valve in the oil filter can fail shut.

So, if the shop didn’t touch the oil filter when the turbo was serviced, I don’t see how they can be blamed for an oil filter gasket failure.

What about mitsubishi? They serviced the last oil change I had.

They didn’t make the oil filter. It was bought from a vendor/supplier.

So, if this is what happened, you have to blame the manufacturer of the oil filter.

Good luck on that one!

Mitsubishi is the manufacturer.

Mitsubishi doesn’t make filters. They purchase them from a vendor/supplier.

I worked for thirty years at a major filter manufacturer. And we made filters for just about every vehicle out there.

Only instead of putting our company’s logo on the filters, we put the logos of the brands we were supplying.

This could be GM, Caterpillar, Dodge, Cummins,…etc.

The seal on canister filters is seated in a groove and if the filter was improperly installed in such a way that the seal could be pushed out that would have happened long before 2,500 in my opinion. The only time I have seen a canister filter gasket seal blow out was when the old gasket had been left stuck to the engine and the new filter installed against it and those seals didn’t last long before failing.

Mitsubishi is the manufacturer of the oil filter.

Yeah not sure what happened but the only thing that seemed to cause the oil leak was that. 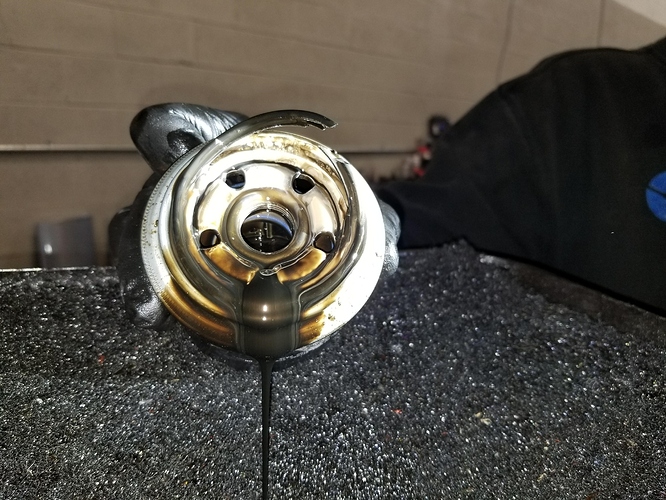 The oil filter for you Mitsubishi is supplied by the ROKI filter company.

You are correct denso produces them I believe.

I think expecting the manufacture to be on the hook for a filter installed for 13 months is a little much. Besides, why did the engine blow? Did the oil light not go on, does the car not have an oil pressure shut off? If the oil pressure is lost, the oil light goes on and you shut the engine down to avoid damage.

You don’t know what, if any, damage has occurred. You’ll need to get an assessment done by a shop. I’d definitely tell the shop that did the oil change what happened to begin establishing a paper trail. It’s not apparent that anyone is at fault, but that’s one reason for insurance.

Don’t expect this to be a quick process if there is significant damage.

Mitsubishi did the oil change. When the damage was done I towed the car to my friends shop. He showed me the oil filter failure. He tried to start the car after changing the oil and he said the engines done.

What year is this Mitsu?
How many miles are on it?
Do you have records showing that the maintenance has been kept up to date?
Do you monitor you fluids?
What was the reason Mitsu gave for not replacing the blower under warranty?
Are there any other problems or failures not yet disclosed?

Bottom line, there isn’t enough information here to render an opinion on Mitsu’s refusal to cover his under warranty.

I’m going guess that the Mitsubishi shop will want to look at the car. Talk to them tomorrow when they open and tell them what happened and what your mechanic friend told them. In fact, they may want to talk to your mechanic friend. I think that’s your next step.

That damage is caused by excessive oil pressure.

We use to put filters in a test cell, and apply pressure until we could determine what would fail first.

And that’s what we would see.