We live in Sacramento, California, where we get no snow and very little rain. We’re looking for a new car and my husband wants to get a Forester for its safety features. I say we don’t need a AWD and other cars may have safety features that match (I’m thinking of a Prius). Any thoughts?

Really up to you, my mom has been loving her 2010 Prius that she bought after a long search for the car that worked best for her.

Unless you plan on visiting Big Bear frequently, you don’t need awd

If you are outdoors people and enjoy the Sierras to the east, AWD might help, as @db4690 said. If you stay in the valley, it isn’t needed.

I agree with others that a Forester is no safer than most vehicles in its class.

We live on the Eastern slopes of the Rocky Mountains and have never felt the need for AWD. We install good winter tires in the fall and happily motor trough the mountains all winter.

At one time all cars traversing the Donner Pass had to have chains, I under stand. Today’s vehicles with front wheel drive and winter tires no longer need them.

A Prius will be a fine choice and they are extremely durable.

I believe that there is no more over-rated safety feature than AWD. Tell your husband that a Prius has all wheel brakes just like the Forester.

The August 2017 Consumer Reports has a big article on car safety systems, which ones owners like best, and the car brands that do them best.

I know what I’d do and I can understand a guy not wanting to drive a Prius, especially if he doesn’t have a straw hat. Yeah you don’t need AWD but it isn’t really going to hurt anything. I’ve had AWD in Minnesota and hardly ever have had a chance to even use it.

I can understand a guy not wanting to drive a Prius, especially if he doesn’t have a straw hat.

I’m in southern California, and none of the Prius drivers wear a straw hat

We bought a Honda CR-V and deliberately did not buy AWD. We live in coastal California. AWD has some clear negatives. It is very sensitive to tire diameters and if you have to replace a tire because of damage you may be told you have to replace all four. There are complex systems to make AWD drive work smoothly and they require maintenance. That costs some money, so if you aren’t going to need AWD why pay for it? And, you will have a small, but real, gas mileage loss because of AWD. That’s not a huge issue, but again why buy something you don’t need?

All the nonsense about typecasting people by what car they drive is such a waste of time. Seriously, if someone thinks less of you because you drive a Prius, or wear a straw hat, or whatever other BS theory, do you truly care?

Forester is a very nice car, lots of room, headroom, and great visibility. I’m considering one for here in Dallas.

I can help you win the argument if you want. The Prius scores Good on all IIHS crash tests. The Forester does not. It scored only Marginal on the passenger side small front overlap test. Prius comes standard with active safety. Eyesight is optional in the Forester (and you should get it). I own a 2016 Forester and I have never recommended one to anybody. Based on my research, Subaru still has not solved the oil consumption problem that causes some percentage of the Foresters to suffer engine failure. If you want to buy time, remind your hubby that the Forester is all new in 2019. The ones on sale now are a five-year-old design. 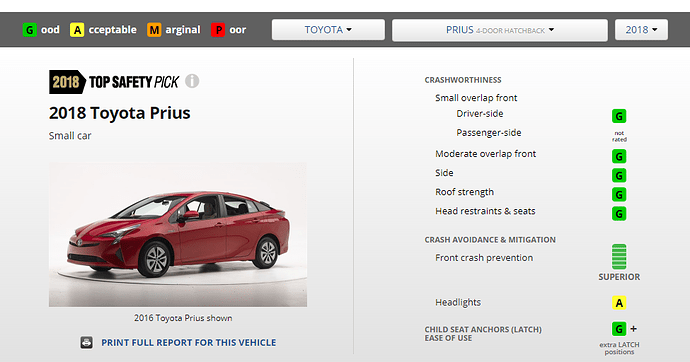 I know what I’d do and I can understand a guy not wanting to drive a Prius, especially if he doesn’t have a straw hat.

I’m now trying to figure out how Forester drivers dress.
Maybe we could recommend a car that goes with fedora hats and pin stripe suits.

Front wheel drive cars with electronic traction and stability control like the Prius are remarkably good on ice and snow, at least if you put appropriate tires on them (the stock tires on the Prius in particular have all the traction of slick glass). I once drove a front wheel drive minivan through a blizzard that had 18 wheelers spun out on both sides of the road without a problem. I didn’t even have to put on my tire chains. And with tire chains, you can handle anything you have clearance for – traction is not going to be your issue.

In short, there’s reasons to get a Subaru, but safety isn’t one of them. Fun may be – Subarus are generally pretty fun to drive, the AWD gives them neutral handling and the low center of gravity of the flat four engine helps too – but they’re no more or less safe than any similar-sized front wheel drive car. They’ll tend to be more expensive over the long haul because the flat four engine is more complex than an inline four and the AWD system is more complex than front wheel drive, the more complex something is, the more there is to break, and the more expensive it becomes to maintain. So: Subaru = fun, Prius = boring. But safety doesn’t come into the equation at any point in time.

I’m now trying to figure out how Forester drivers dress.

How do Prius drivers dress??
SLOWLY!!!

It was an old discussion/joke that we had some years ago but that’s ok, flame away. Lemon drops anyone?

In our hiking group we have 4 Forester owners plus a few Outbacks. They dress in whatever they want to depending on the circumstances. Most of the clothes can be found in the L.L. Bean order book.

When going to concerts they dress the part as well.

Only one has a beard and two are single women who can afford more car, but like their Foresters.

In the past male Volvo owners nearly all had beards and their wives dressed in “:natural fibers” and wore little makeup. Those days are over.

I think it is a foregone conclusion, although I’m sure some here will argue about it, that certain types of people buy certain types of cars. Who hasn’t referred to tan Buick LeSabres as grampa cars?

At any rate a few years after the Prius had come out, I used to encounter this one guy on my commute driving a green Prius. He looked like a Sociology professor since he was heading back to college town. At any rate, I suppose in his 50’s, with whiskers, his nose high in the air (maybe so he could see over the steering wheel), and wearing a straw hat. Same thing every time I would see him. But he’d be going precisely 3 miles under the speed limit in the right hand lane on the open freeway. But when I would try to pass him with my red Riviera, he’d speed up to not allow me to pass. Of course I could blow him off the road, but my object was just to go around him at my own speed rather than have a drag race. So i’d just back off and go back in the right lane again. He did this to me more than once on different days like he was the keeper of the highway. So at any rate it was like imprinting where I see all Prius drivers with their noses in the air wearing straw hats. Yes stereotypes are very unfair but they are fun.

@bing Some years ago on a plane to Atlanta I sat beside an attractive middle age lady who was conservatively dressed in Natural Fiber clothes and were only sparing makeup. Somewhere along the trip the conversation came to cars. After a few sentences from her I asked “How do you like your Volvo?” She immediately (without asking how I “knew” she had a Volvo) launched into the praise because it was designed and built in Sweden and was very safe.

I was stunned but not surprised at what I was hearing, having worked for a Swedish company; the same one that used to build all the bodies for Volvo until the mid sixties.

The weird thing about Volvo owners is that they tend to be quite intelligent, yet allow themselves to be brain-washed by propaganda. P.T. Barnum and Joseph Goebbles, Hitler’s minister of propaganda, would stand in awe!

The rednecks of Texas have mostly gotten over Priuses and many of them drive one themselves. I even see a Tesla regularly at the local trap and skeet club.
Nobody makes a big deal about them anymore.