I just saw this photo and it reminded me of the caller who wanted to glue sea shells all over her car.

Bonus points if you can identify the year/make/model.

It is the latest in a long tradition. 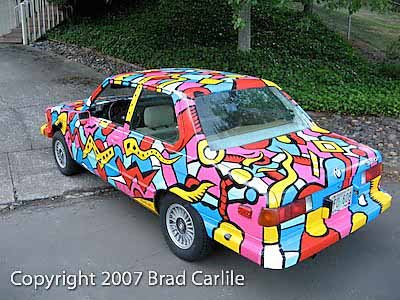 I believe the same mountainbike is correct.

Yippeee, I gots the bonus points!!!

You may now cash them in for a free toaster.

Well done, mtbike. I knew it was an early nineties Corolla, but hadn’t the faintest idea of the exact year. Given all that has been removed/obscured, how could you tell this was a '91 instead of some other year with that body style? Toyota is religious about giving their cars a mid-cycle revamping, but that leaves about 3 years that look the same, except sometimes for options.

A few of years ago at the SF Auto Show Toyota was featuring the ‘new’ Corolla, but their buxom babe on the turntable made sure everyone new this was just a mid-cycle freshening, not a fully redesigned car, and exactly which bits had been updated. All of the literature on hand also emphasized the modesty of the makeover. I had never seen an automaker do that before. Normally they claim it’s all new if the tail lights, grille texture, and wheel covers were changed. I respected Toyota a lot for doing what they did, but they put more emphasis on it than was really necessary. Most people looking were just seeing the upcoming Corolla. That it looked a lot like the old one didn’t bother them much. Anyone serious about cars already knew that it was a modest mid-cycle freshening and weren’t bothered by it.

they must have been playing to the , if it ain t broke don t don t fix it attitude and the corollas good rep