Are the tires too old?

I have a 2014 F-150 supercab 2WD with only 35k miles on it. I purchased it last week from a dealer who said the previous owner turned it in after their lease ended. Everything on the truck is great but I’m curious about the tires. The tires are original from when it was built in late 2013 according to the sticker on the door and the date code on the tires say “4113” which means the tires were made in the 41st week of 2013. The tires still has decent tread but I’m wondering if they are nearing the end of their life? I can buy new tires right now but wanted to know if the old tires will be okay for the time being?

If they are otherwise OK, I think the age is not a problem. That said, I have bought a new-used car and decided fairly early on I didn’t like the tires, for noise or vibration problems that balancing didn’t cure, and no underlying mechanical problem, and bought new tires after researching in Consumer Reports and on tirerack.com.

I forgot to mention the original tires are Michelin LTX A/S tires. If that make any difference?

Where do you live?

I live in Los Angeles, and the sun and heat will have pretty much killed tires of your age by now

I live in Knoxville, Tenn but the truck I purchased was actually in southern Georgia.

Without seeing them, they might be okay for another year or so.

I used the penny method and the head is barely touching the tread if that method is still correct?

They do sound pretty much worn out. Enjoy new tires soon!

If you can see the top of Lincoln’s head when inserting a penny in the tire center tread, the tires are worn and need replacement.

Lincoln’s head gives just under 2mm of tread; Washington’s about 2.5mm. Probably hard to find a real-world functional difference when it comes to tire tread depth.

I would measure depth in a few places around and edge to edge. If your tires are wearing evenly, that’s a good sign and keeps you from having unnecessary parts replacements or alignment when you get new tires. Put that money into better tires.

THIS is what tells you the tread is worn out. Forget any tricks with coins 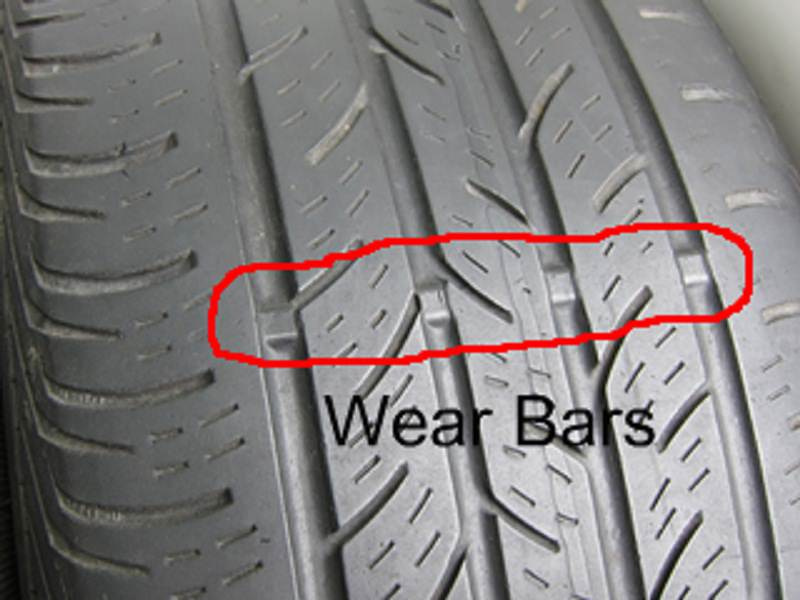 When the tread and wear bars are even with each other, it is well and truly time time to replace the tires. 5 years is getting to the end of the line for tire age in hot dry areas. TN or GA, should be good for about another year. If you find yourself spinning a tire on wet pavement when pulling away from light, the rubber has aged out. If you hydroplane at highway speeds in a heavy rain, then the tread is too worn no matter what the wear bars say.

I don’t bother with coins, except to make purchases

I use a tread depth gauge

telling me the depth to a president’s head is meaningless . . . to me 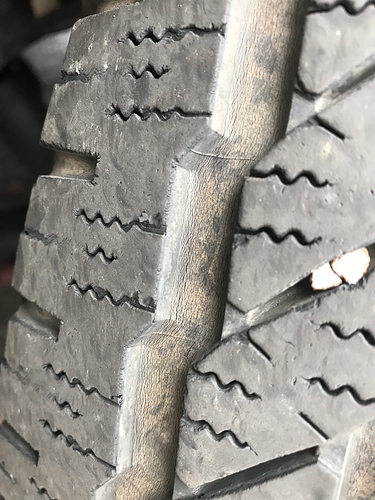 After inspecting the tires closely, I noticed there are several cracks inside the treads. Is that a sign of dry rot? Tried to take a clear picture and it seems to be clear enough?

Looks pretty good to me. Dry rot is just getting started. No issues. The tread depth looks OK, too.

Looks okay for the age

I’m only speaking about the condition of the rubber, not the tread depth, because I’m not there with a tread depth gauge

Not everyone will buy a gauge. The depth to the president’s head is meaningful: it tells you the depth. As does a tread depth gauge. 2.5 mm Washington; just under 2mm Lincoln. Anyone who has coins can find them useful for this purpose, as well as others.

Not everyone will buy a gauge

A tread depth gauge is only a few bucks, and you can store it in your glove box

I’m not going to argue with you

I’m merely pointing out a fact

Yes, we both are doing that. I do not disrespect your use of a gauge.