Hi all. First post. So a couple of weeks ago I was headed up to Tennesee and hit an Elk. Had almost managed to stop as I slid into him, ended up doing a few thousand dollars of damage to the hood, light and grill. Insurance has been great with Geico. The repair shop did a good job on the repairs, but as we were driving away my daughter started yelling that ants were on her. I pulled over and found that a bunch of ants were under seat, saw dozens in one glance. TOok it back and the rep at the repair shop said he could spray them with some ant spray and got some ant spray.

As he sprayed I asked if they had seen this before and she said “well, they might have seen this, but not all the time.” Overall he seems like a pretty good guy, and my interpretation of this was that he was familiar with this happening but wasn’t about to directly state it for legal reasons. Of course I could be wrong, but that was how I interpreted it.

We left, when we got home we foudn a trail of them around the new grill seeming to make a nest. I opened the hatch the dust that has accumulated at the top of the hatch is wet like mud, seems like water has gotten into the trunk area? The ants are living under the plastic area of the trunk, as when I tap it each time 7 or 8 hands will run out in circles and back inside. When we drove today we had to kill dozens off our person as they are constantly coming out and walking on us.

So, my insurance agent spoke to them, they called me and they said “we don’t put ants in cars or control ants but bring it back in next Wednesday and I can see what we can do.” I did ask about if it was worked on outside, as there were a few parts in the hatch that suggest they might have stored some parts in the hatch maybe while working on it, so thought maybe it was rained on with the doors open or something like that, but he assured me that it was not worked on outside and they didn’t store anything in the hatch.

Not sure what to think, how this could happen, what they can do or how serious this is. All I know is we have never had an ant problem before, and now we do. Any advice or ideas?

I’ve used this stuff to get rid of ants, and it works pretty good. 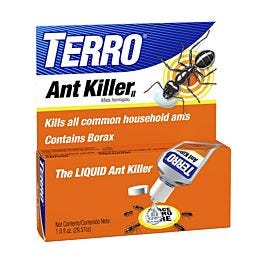 TERRO liquid Ant Killer takes care of your ant problem all the way down to the colony to keep ants out of your home!

Yep they take the stuff back to the hive and pass it around. We use little pads and you can put some in the trunk, inside, or wherever you see a walking path. Or start disassembly and spray, or hire and exterminator to bomb it. More of an act of god than a body shop problem though unless snakes.

Me, I’d just leave the ants alone and focus on figuring out why there’s water in the trunk. The ants will go away once the water is gone.

Water in the trunk is often caused by problematic trunk-lid seals and tail-light-to-body seals. Make sure leaves/debris cleaned from the drain channel that goes over the top & around the trunk opening.

On a trip? There must have been food in the vehicle, ants don’t thrive on broken automobile parts or body shop dust.

Vacuumed it and filled the car with various poisons and traps. Took it back in to the shop we’d and the guy said he didn’t see anymore. For whatever that’s worth. Then he tried to say this was unique to my car.

What he didn’t know os that while he was waiting I was chatting with the ladies at their rental shop and they told me they have been having a huge problem with ants making nests in there rental cars. They said just a week or two ago they found an entire nest built into a steering wheel cover. She said they have been trying to figure out what is going on for a while and that it seems to happen after it rains.

So yea. As far as I can tell they are gone, planning to wait a couple days, if I don’t see anymore I am asking them to vacuum and shampoo everything to try to get rid of the poisons now covering everything. Def won’t use them again though which is sad since I have been happy with them before and they are part of the Nissan store I alway take my pathfinder too…

Glad you got the ants-in-the-car problem solved. Even if not solved, still better than snakes on a plane … lol … Ants just aren’t much of a problem west of the rockies in my own experience, but when I visited a relative near Chicago, wow, biggest ants I’ve ever seen. Could have been mistaken for small elk … lol …

Be glad you don’t have the problem that crops up here now and then in both house and cars. Snakes.