Another car collection goes to auction 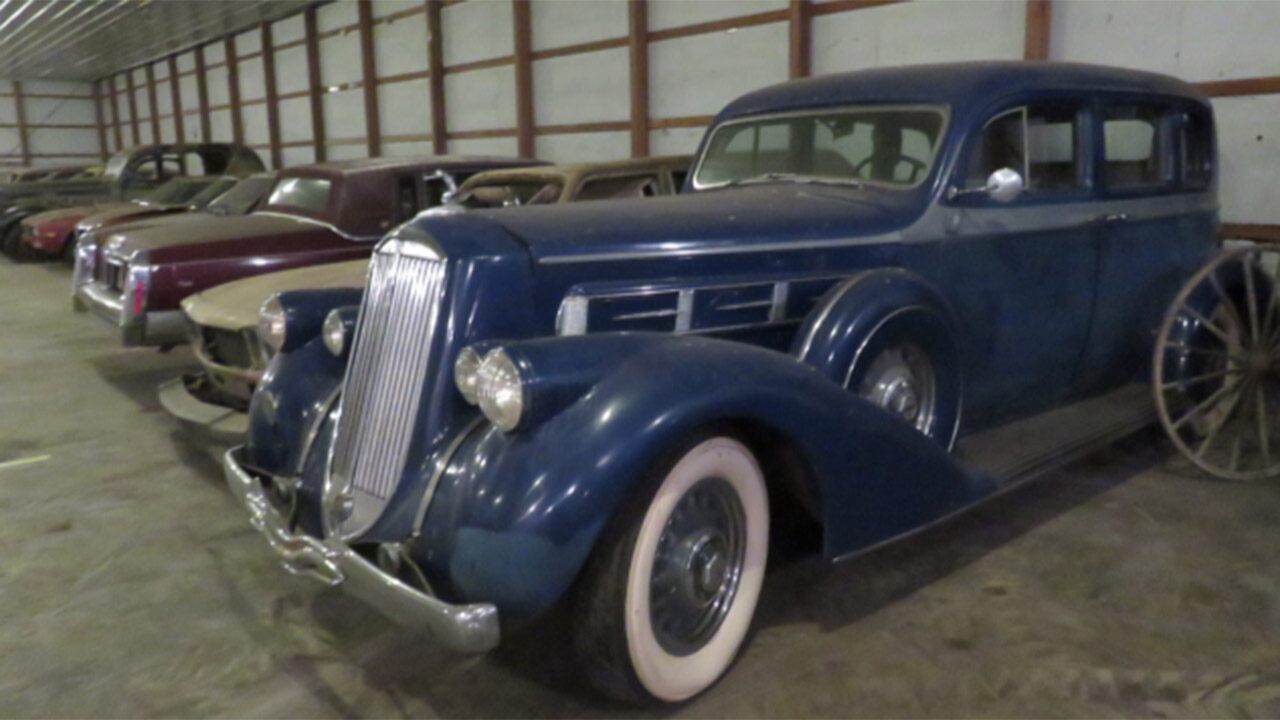 The secret was actually pretty big.

Eclectic, for sure, given the stuff he chose to buy. Looks like mostly older restorations. He probably bought fairly well but a big auction won’t bring the big bucks for the cars, it will just clear them out in a big hurry.

One of the “Strange Inheritance” episodes focused on a huge collection a family member amassed over decades and touched on an heir’s attempt to sell them off car by car over 4-5 years. It was costing them more to maintain the buildings and taxes on the land than he was bringing in from the sales. He finally gave up and had a large auction house sell them.

It was costing them more to maintain the buildings and taxes on the land than he was bringing in from the sales.

In a town near me, there is a somewhat strange-looking house that has sat vacant for decades, and it has deteriorated badly along the way. What was originally an over-done, Nouveau-riche house in the '70s is now a sad looking pile of bricks. According to people in the know, relatives of the original owner have continued to pay the real estate taxes for the 20 years or so since the owner died, and they also pay to have the grass trimmed.

In the meantime, the area has gone from semi-rural to mostly industrial, and the possibility that anyone would want to live there has gone from… maybe… to somewhere between slim and none.

Why would people continue to pay real estate taxes on a vacant home for decades? Some behaviors are truly inexplicable.

Often commercial land brings more money than residential land. I suppose if that was the case here, they would have sold already. Maybe commercial development hasn’t quite made it to their property.

Maybe commercial development hasn’t quite made it to their property.

Commercial development has actually taken place right up to the home’s property line, and that has been the case for well over a decade. The time to sell that house would have been many years ago, and even if no buyers wanted it for a residence, it could have been used for medical offices, or something similar.

Now, it would likely cost more to make the house structurally-sound and “livable” than it is worth. It couldn’t even be considered to be a “tear-down” at this point because it is doubtful that anyone would want to build a new home next to a detergent factory, and the property isn’t big enough to construct something like an office building. I think that their last chance to sell the building evaporated when plans to build that detergent factory were announced. Perhaps the company that built the factory would have bought the property if the price was right. Who knows?

In the meantime, the family has probably paid something on the order of $150k in property taxes over the years.

You’d have to take a gander at the catalog online but people are already bidding on the auction, a set of ardun heads is up to $7,500 at the moment. An eclectic mix of european cars are later in the auction run. Called the Jab collection

Why would people continue to pay real estate taxes on a vacant home for decades?

There are a number of reasons… One is legal wrangling over the estate. Those kinds of cases can take years to resolve (and enrichen only the lawyers). Two, They can’t bring themselves to enter and dispose of the belongings and home… think mourner-hoarders. Three, some folks think they will rehabilitate the property and move in or have the kids move in or rent it. Same as a car restoration project or projects. Life gets in the way.

I am sure there are may, many more. People are strange, for sure.

I know a woman who has kept her mother’s house since the mother passed away over 10 years ago. The house has sat vacant the whole time. It’s in a nice area in NJ. She pays taxes and maintenance on it. This woman is something of a hoarder, she has a very hard time parting with anything, a house included.

… all of which tells you that this woman is irrational, and is in need of help.

All you need is one of the heirs to refuse to sell and it’s gridlock. When my mother died, my sister and some friends lived in Mom’s house. I didn’t mind that. After she moved out, we rented it for a few years. After the selling prices got high, I wanted to sell, but she didn’t. Prices dropped, and we never quite recovered to the high, even when we sold it 8 years later.

Vintage motor vehicles can be a gold mine or a money pit. In 1976 I saw many car transporters carrying dozens of Ford Edsels to the crusher. Of course that resulted in them becoming rare and valuable.

Of course that resulted in them becoming rare and valuable

Are you sure that is the reason??

Maybe it is because they never sold that many in the first place!

Hagerty’s valuation tool shows them steadily losing value over the last 3 years. The folks that want to own them are exiting the hobby and there aren’t new buyers waiting to buy an Edsel. “Aging out” so to speak.

The relationship between “People and Stuff” is as diverse and as strange and or irrational as it can possibly get.

I am guilty of both the rational and irrational when it comes to “stuff”. Lately I feel like these things have come to own me however…

A local guy has one of those Ford Cosworth engines. It’s worth a bundle; Being a bike guy, I’m kind of prone to that Vincent. Rare and the fastest bike in the world when they first came out.

One time at Sturgis back in the late 80s I had a conversation with a guy there who had a restored Rapide. He said that he had been offered another bike and 50 grand in cash for it but turned it down. And that was 30 or so years ago. The one Brit bike worth more is the Brough Superior which is what T.E. Lawrence was riding when he bought the farm.

Not really all that unusual for this particular auction company, some are listed as having a title and a fair amount are listed as “title app” which probably means they’ve asked the state for a duplicate title. A few projects are without titles.

Heirs can bring a case to court for an order to sell the property at auction and divide the money.