Another Audi "cheat" device has been found

The lengths to which VW/Audi was willing to go in order to cheat on emissions tests seem to be almost…boundless.

Maybe the penalties will be boundless, too. I doubt it, but a guy can hope.

Ouch! VW is definitely having a bad year.

…and it just got even worse for VW, on a different front.
If this VW official is confirmed to have withheld information from VW stockholders (thereby fiddling with the share price), I predict that there will be a massive class-action lawsuit on behalf of VW shareholders who lost money on their stock when the share price later plummeted.

If that type of class action suit takes place, the potential monetary penalties from that legal action–coupled with the massive fines already imposed on the company by both The US and European governments–could make the company’s continued existence…tenuous. 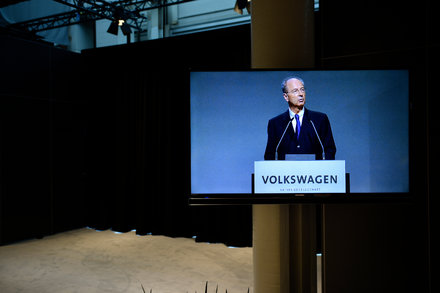 Prosecutors are investigating whether Hans Dieter Pötsch, the carmaker’s former top finance official, failed to warn shareholders about the scandal.

Yup!
Whether we are talking about corporations or about people, arrogance can definitely lead to one’s downfall.
Take the case of Richard Nixon who was already destined to cruise to a massive victory over George McGovern, but Nixon chose to engage in (and cover up) the burglary of Democratic Party offices at the Watergate complex.

In NJ, Chris Christie was already assured of a huge re-election victory over his Democratic opponent a couple of years ago, yet (according to the sworn testimony of 4 of his aides), he helped to engineer (and cover up) a 4 day closure of access lanes to The George Washington Bridge, simply because a local mayor had failed to endorse him.

For those who don’t see the automotive connection in my comment, think about the traffic problems caused by that intentional, spiteful, 4 day lane closure. This gambit began on the first day of school, and it caused school buses to bring kids to school 2 hours late, and neither police vehicles, nor ambulances, nor fire trucks were able to get to their emergency destinations within a reasonable timeframe, thereby seriously endangering the local populace.

The second part of that statement is certainly true. As for the first part…my understanding is Nixon had no advance knowledge of the Watergate break-in. I guess you could say “he nurtured a culture where this sort of behavior was seen as acceptable,” but I’ve never heard it said that the break-on was done on his orders, or even with his acceptance.

Of course it can’t be proven. Nixon was probably crazy, but he wasn’t stupid!
As you may recall, there were multiple erasures on the tapes that were continually recorded in The Oval Office, with the famous 18 minute deletion being the most notorious erasure.

In NJ, the e-mails between Christie and his aides were deleted, and the governor’s cell phone was…missing…for several months. Recently, it turned up in the possession of one of his attorneys.
I’m sure that no texts have been deleted from that phone, however…

And, just to keep this on an automotive footing, our esteemed governor is transported in a Chevy Tahoe–with heavy-duty suspension.

In NJ, Chris Christie was already assured of a huge re-election victory over his Democratic opponent a couple of years ago, yet (according to the sworn testimony of 4 of his aides), he helped to engineer (and cover up) a 4 day closure of access lanes to The George Washington Bridge, simply because a local mayor had failed to endorse him

That wasn’t to win reelection. That was for punishment.

Okay–please allow me to clarify the facts.
Because Christie was already looking toward his next gig (POTUS–or so he thought), he wanted to be re-elected with the biggest possible margins, and–perhaps even more important in his mind–was the need to have endorsements from every possible Democrat, so that he could claim that he “works across the aisles”. Most mayors (both GOP and Democrat) were “bought-off” with tickets to Giants games or with fragments of steel from the World Trade Center. This one particular mayor refused to be bought-off and refused to endorse Christie, so in the governor’s twisted mind, that mayor had to be punished.

And, here is more information to confirm the automotive connection:

According to the Fort Lee emergency medical services coordinator, traffic jams delayed paramedic response times, including a 9-1-1 call for Florence Genova, who subsequently died of cardiac arrest.
In January 2014, her daughter told The New York Times that she “wants to stay out of it. It’s not political”. She noted her mother’s advanced age (91) and opined that “it was just her time”.

In at least one instance, emergency medical workers were forced to leave their ambulance and respond on foot because traffic congestion was so heavy. Emergency responders were delayed nearly one hour in rendering assistance to a man experiencing chest pains.

Within hours of the closure, various Port Authority officials were being told that the traffic delays posed a threat to public safety. At 9:29 a.m., Matthew Bell, a special assistant to Bill Baroni, e-mailed Baroni regarding “urgent matter of public safety in Fort Lee”. Fort Lee Borough Administrator Peggy Thomas e-mailed the PA’s director of government and community relations, Tina Lado, with her concerns, noting that police and emergency departments received no advance notice of the closures. At 11:24 a.m., Lado e-mailed both Wildstein and Baroni informing them that due to the closures, police and ambulances were having difficulty responding to emergencies. That e-mail noted two specific incidents: a missing child (later found) and a cardiac arrest. These safety warnings were reportedly ignored.

Oh, I don’t know about that. I see way too many obscenely arrogant people whose arrogance has gotten for them extreme power and wealth. I wish there were 'karma" in the universe, but I think it’s something we just tell ourselves to make ourselves feel better.

As software code goes . . how would one know ?

I agree with @meanjoe75fan. I also believe that Nixon was protecting his allies. He deserved impeachment to be sure, but he caused himself considerable trouble by not admitting the facts soon after the break-in.

I know one of the perps, BTW. The father of two kids I knew at church was among the perpetrators. Really nice family. It came as quite a surprise.