An interesting, forward-looking GM ad from 1969

While the stated technology is different from modern GPS, it is interesting that GM was experimenting with a GPS-like navigation system in the late '60s. 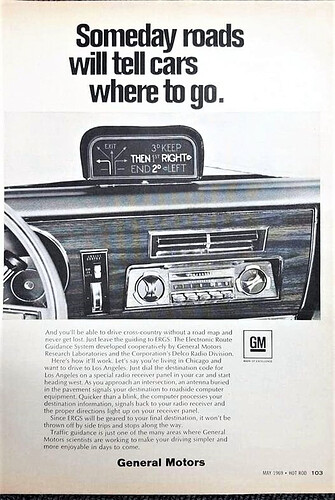 Sort of a da Vinci situation… a great idea preceeding the technology to actually achieve it… like da Vinci’s helicopter, for example.

Inspired by Star Trek, I’d like to imagine.
I think it could have been done back then (at enormous cost), with all of the computation done on big stationary computers and a not so smart transceiver in the vehicle.

Not surprising that people have ideas that cannot be implemented until technology catches up. We could have had the internal combustion engine centuries earlier if the machine tools existed. Without evidence, gotta think the massive military spending in those days propelled the technology.

Not surprising that people have ideas that cannot be implemented until technology catches up.

You know those scanners that read bar codes, many use low-level lasers or LED lights to reflect the light back to the scanner sensors. Those readers have been around about 10-years less than the patent that described them…

A forward thinking inventor foresaw that capability and patented the concept. When the technology finally caught up to implementing the concept, he sued numerous manufacturers for patent infringement and won a tidy amount.

As more and more uses for this concept advanced, industry sued on the basis that his description was too vague to be a patentable idea and since he could not provide proof of concept at the time he patented it, it was all just “crystal balling”.

Industry won and the inventor saw his last royalty check.

Yeah patents are not forever. After so many years they are open to the public. The whole idea is to promote innovation and to give the originator an award, but not forever. Luckily the patent on wheels has run out.

Yeah patents are not forever.

… unless you modify the original design, and then reapply for patent protection.
My grandfather’s patent on a life-saving device for firemen expired, but by that time he was very ill and had neither the funds nor the energy to file for new patent protection. A company in St. Louis that had been one of his biggest customers then jumped in and began manufacturing his original design.

unless you modify the original design, and then reapply for patent protection.

Common methodology to get around patents here in Silicon Valley. Patents used to actually be good for protecting rights while allowing everybody else to see how it works. But now-a-days patents are just ammunition used in patent wars. Some engineers here do nothing but write patents, often based on nothing more than slight improvement on other previously granted patents. Tech companies now apply for one patent after another; the reason is if any of their patents are challenged in court, the more patents you own, the more you can obfuscate and confuse the other side’s arguments.

For the technology-curious sort, it’s fun to look at patents though. Quite entertaining. Easily done view the internet, and free, but I haven’t done it in so long I can’t remember how. As I recall I used to a local patent-library website as the starting point.

Easily done view the internet, and free, but I haven’t done it in so long I can’t remember how

It’s been a while since I have done it, but IIRC, there was a searchable database of old patents. That is how I found my Grandfather’s original patent application.

The automobile was patented in the US in 1879, 6 years before Carl Benz conceived his ICE automobile. All US automakers had to pay Selden rights for every car they built. Henry Ford refused, got sued, and lost but won on appeal.

Older patents were good for 14 years from issuance, now it is 20 years from filing. Patents can protect the product or misdirect the opposition.

Only an individual can be granted a patent, not a corporation. There are fees to file as well as maintain granted patents. Patent rights can be assigned to another person, business or corporation.

I was granted a bunch of US patents over my career. Many filed in the EU and Japan as well. Patent lawyers are my favorite kind of lawyer!

I want to say that Honda had something sorta-kinda like this (in theory). Their pre-GPS navigation solution had a static map and a marker that represented your vehicle, it used the earth’s magnetic field (whose strength varies from location to location), to tell you what direction to head. IIRC it wasn’t super-precise but would generally get you within ~1000 meters of where you were trying to go.

IIRC it wasn’t super-precise but would generally get you within ~1000 kilometers or so, of where you were trying to go.

@FoDaddy I fixed that for you. You’re welcome. Also about the same accuracy as the early GM system. Just kidding put the gun away !

The company I work for has been involved in GPS since the beginning concept. We design and manufacture a significant part of the system. We got involved starting in the mid-60s as the concept was being developed and productionized. Our equipment is aboard the first satellite launched in '78 is still functioning to this day. We are onboard every single US satellite and many foreign constellations.

As with most things, there existed a military only version of these systems before the commercialization of the technology. The Transit system existed in the early 60s before the Block 1 version of the more commonly known system was developed.

So, by 1969, the general population knew basically nothing about these technologies but they had been envisioned and some put into practice years before these revelations were publicized.

My favorite science fiction author, Robert Heinlein used a saying that covers that nicely - you don’t railroad until it’s time to railroad.