An ad that didn't seem to sell 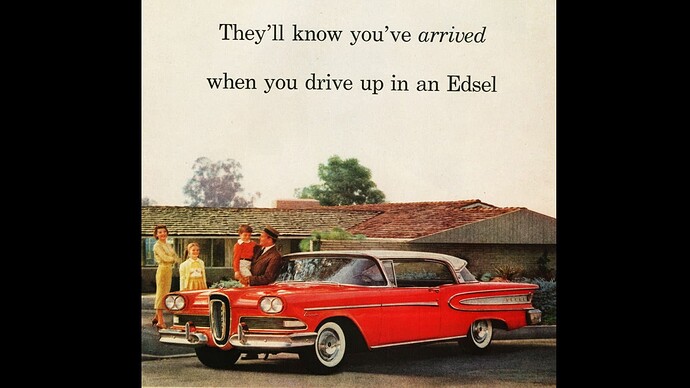 Poor teamwork according to the attached article. All the new technology was confusing, the name didn’t register with the public, and initial reliability was poor. Pretty much a flop all around. 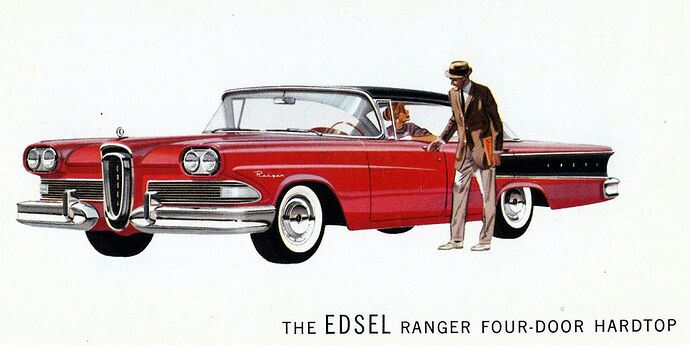 Ford had big ambitions for Edsel. Unfortunately, they were too big.

That article could easily describe GM in the 80s and beyond for every model except the Corvette. With the small teams assigned to the Corvette led by Zora Arkus Duntov, Dave McLellan, Dave Hill and Tadge Juchter, the Corvette has a singular identity.

That article could easily describe GM in the 80s and beyond for every model except the Corvette.

Along those lines here’s one of a series of articles about GM’s mistakes:

GM had some duds for sure. The Diesels from that era were notorious although it sounds like the later models were corrected but not before the PR damage was complete. This is the main reason Americans haven’t purchased diesels in any large number until relatively recently.

When Diesel Was Dreadful: The Oldsmobile Diesels

A look back at GM's disastrous Oldsmobile diesels.

More recently, the Aztec is considered to be one of the main factors that killed off the Pontiac brand. The 5 Cars That Killed Pontiac

Today there are enthusiast groups for both the GM Diesels as well as the Aztec. One of the local radio stations in town has owned a white Aztec since it was new. I know the people who work at the radio station think it is a piece of junk but it certainly is distinctive and everyone in town knows it is the radio station car. They use it for events and remote broadcasts so have it all wrapped with logos for the 5 various radio stations in the group. It certainly stands out and is probably a good attention grabber for marketing purposes.

More recently, the Aztec is considered to be one of the main factors that killed off the Pontiac brand.

… and everyone at the Pontiac Division swore that they nixed its production. Somebody obviously approved it, but nobody was willing to take the blame.

All the new technology was confusing

With the exception of the push-button transmission controls in the hub of the steering wheel, I don’t recall any new technology on that model. The two cheaper Edsels (Ranger & Pacer) were essentially Fords, albeit with different body panels. The two more upscale models (Corsair & Citation) were built on the longer Mercury frame, and were really just Mercurys in disguise.

IIRC, the push buttons in the steering wheel hub were a feature on only the two more expensive models. I saw an Edsel Pacer up close a couple of years ago, and it had the automatic trans shift lever on the steering column.

The most trouble-prone thing on Edsels was the push buttons because their placement meant that Ford’s engineers couldn’t use a mechanical linkage, as Chrysler did, and the upscale Edsels had electrical solenoid controls on the transmission to actuate the trans. The problem was that the contacts on those solenoids weren’t sufficiently shielded from rain and road debris, and they suffered frequent failures.

maybe it was the styling, or… ?

I would say that there was too much “Truth in Advertising…” – “They’ll know you’ve arrived when you drive up in and Edsel.”

Now I’m not saying the Edsel is not a beautiful car; but being gracious, it had some very “unique” styling…

I remember reading that when the Edsel was finally killed, the lead engineer, Roy Brown, offered his resignation, but Henry Ford II refused to accept it, he said something like that mistake cost $250 million and he was not going to let another company profit from the catastrophe…

Similar could be said of Chrysler’s Airflow from 1934. Polarizing styling, lots of new technology in the body-build that caused delays and quality issues fed the rumor mill. It died from a lack of sales.

Every carmaker, US, European and Asian has one of those stories to tell.

As used cars, the 1959 and 1960 Edsels we’re good buys, assuming the card were in good condition. These cars were essentially Fords with a different body for 1959. In 1960, only the grille and tail lights separated the Ford and the Edsel. Yet, the Edsel’s depreciation for these model years was much greater than that of the Ford.
A mechanic I knew during this time period recommended that I stick with Fords or Chevrolets as parts were widely available. I bought a used 1955 Pontiac instead and regretted that decision. Each GM division had its own engine and parts didn’t interchange. The 1959 and 1960 Edsels were essentially Fords and the engine and drivetrain parts were widely available and the high depreciation made them great bargains as used cars.

Looking back on it from memory, the last thing they needed was a car supposedly between ford and mercury that was nearly the same. The name and the doo dads I don’t think made a difference. If you liked ford but wanted something more upscale, you got a mercury. And the different lines of each allowed you to fit your budget and desires. What they missed was the market for a small second or metro car that the falcon fulfilled in 1960. The name didn’t mean a thing, there was just no differentiation in the car from what was already offered. They created new markets with the falcon and ranchero that didn’t compete with what they already had. But then with a guy like macnamera, what could go wrong? If you are in the in crowd, doesn’t matter how stupid you are.

… and, here’s a bit of trivia related to the Falcon:
The slightly larger, more upscale version of the Falcon that became the Mercury Comet was originally supposed to be Edsel’s compact car. When Edsel’s sales figures quickly tanked, it became obvious that it should be marketed as a Mercury.

Heh heh. Yep put a horse collar grill on the falcon and call it an Edsel and it probably would have worked.

I should maybe go back and listen to the whole report but seemed they mainly talked about the name. Where did they come up with the idea for the oval grill anyway? Of course back then I think men picked most of the cars, but my wife said she would never buy a car that was frowning or looked angry. She wanted one that smiles. I had never even given it a thought before, but sure enough, some smile. So they must have had someone on the team that liked the idea of a fish.

I had never even given it a thought before, but sure enough, some smile.

Some people likened the Edsel’s grill to a “vertical smile”.

More recently, the Aztec is considered to be one of the main factors that killed off the Pontiac brand. The 5 Cars That Killed Pontiac

But then they followed it with the Solstice, that argument would not sail. It was clearly a sports car and in violation of one of GM’s cardinal rules. “Thou shall have no other sports car but the Corvette at GM”. Because Saturn shared the car as its Sky, it too got the ax.

Just in case you care. https://www.hemmings.com/blog/2019/09/24/12-eccentric-vintage-car-ads-for-your-consideration

How about the Cadillac Cimarron? It was an economy car with a Cadillac price.

How about the Cadillac Cimarron? It was an economy car

It was essentially the standard taxi cab in much of Europe. It was interesting to see row upon row of bare-bones “Cimarrons” lined-up at RR stations and airports in Europe.

Just add a giant tail light clear across the back of Opel’s taxi model, add a few other pimp-type styling features, jack-up the price substantially, and–voila!–a supposed Cadillac… for those who were not very worldly.

If you recall, the slogan was “The Caddy that zigs”, which I guess was an outright confession that all of their other cars handled like the Queen Mary. And, for some reason, there was always a cartoon-style duck in their print ads.

… and–luckily–most owners survived the fires that resulted from their engines throwing a rod and bursting into flames. And, in true GM fashion, they finally “got it right” in its final year of production. 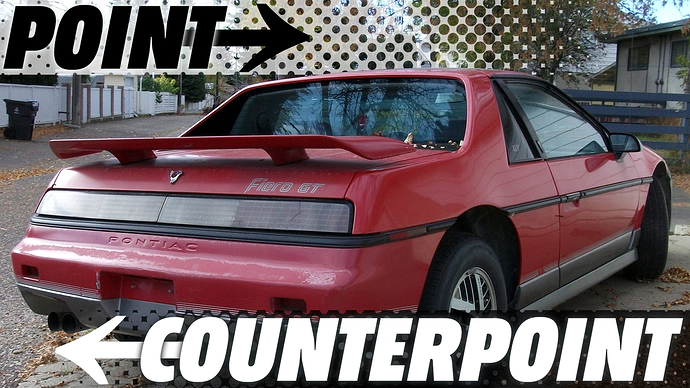 Fiero. It means “Fire” in Italian. That’s actually not true, it means “Proud,” but a lot of people think it means fire, perhaps because the early Pontiac Fieros had a disproportionate tendency to alight into what the Italians would call, “a fuoco.”