AC compressor replacement, how much oil to add

So yesterday I started to replace the compressor on my 99 Lexus RX300 and ran into a little bit of a problem. The new compressor install guide said to drain the oil and match it to the existing oil from the old compressor. Problem is, the old compressor was almost dry and had almost no oil in it. I looked online and seem to be getting conflicting advice on how much oil to add. Some say that I should add 1.4 ounces and others say to add 4.9. How much oil do I need to add to the system after it’s been evacuated?

P.S. I’m also replacing the drier, does that change the amount of oil that needs to be added to the system?

Problem is, the old compressor was almost dry and had almost no oil in it.

If that’s the case, then the entire AC system has to be rebuilt.

And this is what you’ll need. 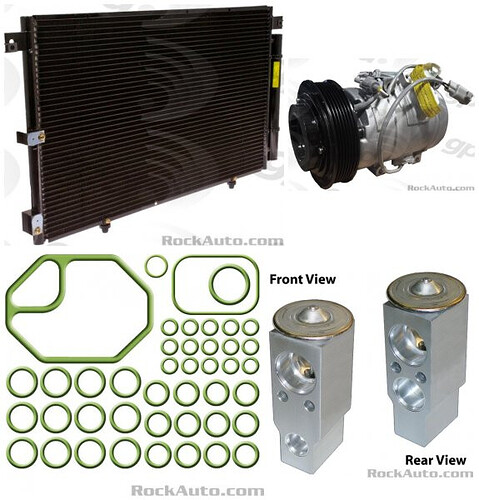 And also the equipment for this repair.

Would I be able to see if that’s what has happened by looking inside the old compressor? I looked up some pictures and from what I saw in my own it looked clean. I’m replacing the old one because the clutch went bad last year and the bearing it almost shot now.

The son and I just rebuilt the AC system on his Civic because the compressor was starting to fail.

Because we want to replace that compressor one time.

I would like to learn more about adding oil to a new A/C compressor as well.

I am going to have to replace the compressor in our 2004 Corolla, it runs but the high side pressure is only about 12 psi higher than the low side when it’s running. I was planning to buy the kit which comes with the compressor, gaskets and seals, expansion valve/drier, and a new condenser coil. One version of this kit says the compressor is “pre-charged” with oil, another version comes with a bottle of PAG oil that you are to add. I assume that you just add the entire contents of this bottle to the compressor immediately before installing it, and that is sufficient?

Similarly, if/when I succeed in getting my 1993 Sundance running again, I assume I will need to replace the A/C compressor since it’s been open to the atmosphere for several years (though I did stuff paper towels in the openings, and in the refrigerant hoses in the car to keep out debris). Before I emptied the A/C system and took apart the engine, this A/C was ice cold.

Replacement compressors for this car either come without oil, or they say “pre-charged with O.E. lubricant”. This car originally used R12 refrigerant. Does this imply that pre-charged compressors come with mineral oil lubricant? If buying a compressor which comes empty, is it sufficient to add one bottle of PAG oil? Obviously, it is cheaper and easier to get R134a refrigerant, but since I am a licensed technician (though not for automotive), I could still obtain R12 or a substitute such as R414B Hot Shot if needed.

I assume that you just add the entire contents of this bottle to the compressor immediately before installing it, and that is sufficient?

NO! That will almost surely over oil the system, causing all sorts of trouble.

Either on the underhood decal or in the service manual you will find the total capacity for system lubrication. Since the oil travels (and then settles) through the entire system, the trick is to see how much of that oil is in the compressor you’re removing and install the same amount of fresh oil in the compressor. There are guidelines to follow for this, but ultimately the only 100% sure way to get the oil charge right on the nose is to remove the oil from the entire system and start from scratch. Not something a DIYer can normally do, but it wouldn’t surprise me if you have A/C flush equipment available since you’re a professional.

Does this imply that pre-charged compressors come with mineral oil lubricant? If buying a compressor which comes empty, is it sufficient to add one bottle of PAG oil? Obviously, it is cheaper and easier to get R134a refrigerant, but since I am a licensed technician (though not for automotive), I could still obtain R12

No. A prefilled compressor will almost certainly have PAG oil, and PAG is not compatible with the mineral oil used in your car. Ester oil is an acceptable oil to use in this case when doing a retrofit, but…earlier K cars were poor candidates for drop-in conversion to R134. The heat dump at the condenser was marginal at best with R12, and with R134 there just wasn’t enough thermal exchange to give adequate cooling at idle or low speeds. But by 1993 I think they were getting ready for R134 and may have upgraded the condensers. At least that’s my experience.

Obviously hoses should be replaced at this age as well. Any well-equipped local shop should be able to fabricate those for you. I know the shop I recently left could.

Each component in the AC system has oil added to it before it’s installed.

The spec is different for each vehicle.

Suggest to ask your local well recommended AC shop take a look at this before proceeding. You can do the work they tell you needs done yourself, no problem, but if you install a new compressor and there’s any debris from the old compressor laying in wait in any other part of the loop, it may destroy your newly installed compressor, and you’ll be out the price of the compressor and back to square one.

You’ll definitely need the gauges, and may need a vacuum pump and holding tank to do this correctly. Not overly expensive, Harbor Freight is one source.

If debris from a failed compressor have entered the system, then wouldn’t replacing the evaporator and not just the condenser be necessary to clean out the system?

There must be some kind of filter you could add to the system, or some way of flushing it out with solvent and compressed air rather than replacing all those components!

I have a problem where the AC condenser has a large amount of oil collected around the connection points because the O rings leaked. Now I don’t know how much oil was lost from the system.

If debris from a failed compressor have entered the system, then wouldn’t replacing the evaporator and not just the condenser be necessary to clean out the system?

This is not done for two reasons. First of all, if the compressor bearings come apart, the debris will end up in the condenser and high side hose(s). There is a filter-drier, and also a strainer screen inside the expansion valve. It is highly unlikely that solid material will end up in the evaporator.

Second, the expense and effort needed to change the evaporator exceeds the possible benefit. It is cheap and easy to change the condenser (often the part costs less than $100, and the effort is minimal with everything else being changed). To replace the evaporator requires many, many hours of labor to tear up the dash, even for a DIYer it’s not worth it.