I am aware that this car is no longer sold in the United States. However, I am considering buying a 2009 Suzuki SX4. I have been looking for an inexpensive AWD. This 2009 has low mileage (49,500), one owner, no accident, is clean, excellent condition and so forth. I have already called my mechanic to see if it would be problematic to do work on a Suzuki. They said they can easily work on them, parts turnaround time is same day or 1-2 days- depending on the part and prices are equivalent to Hyundai. I have researched these cars to death now and I would just like feedback from owners or previous owners. Also, am I buying this car just in time for required pricey maintenance (similar to buying a Honda just before the timing belt has to be replaced)? I clearly do not need anything fancy and it is just me so room is not an issue. Thanks in advance for feedback!

Seems like your mind is made up. 10 Year old discontinued car. As long as it is cheap, go right ahead. If it gets in an accident, it will be totaled.

– wonky electrical issues… such as… Radio dial only displays the frequency when it’s cold outside; CD got stuck in CD player about 15,000 miles ago; Passenger front window electronics started failing (but seems to have healed itself, oddly), and the electronic hatch for the hatchback stopped working (major bummer).

– Some of the plastic trim has started to come off. Get a roll of black electric tape. You’ll be fine. No one will be able to tell. LOL.

– I wished it got a little better gas mileage. But… it IS a 4WD. I keep meticulous records. Around the city I average 21 to 22. On the highway a good tank is usually around 29, but I’ve easily done 30 before. And when the wind was at my back and it was downhill… I hit 32 or 33 once. That was rare.

– Not a lot of room. For one person on trips, though… it’s fine.

I have, unfortunately, been in two accidents with this car. One was hit and run… he hit me from behind. The other was a pretty bizarre one where… LONG story short… a woman in a Mercedes made an illegal left on red (in order to make room for a cop car behind her)… she went through the intersection… got T-Boned by a Honda coming from her right… the woman in the Mercedes spun around, and knocked over a sign alerting drivers to keep right on a concrete barrier. That sign came crashing through my windshield, about a few inches from my head. The sign bounced off the hood.

So… they had to replace the hood and the windshield. Bizarrely, NOTHING else was damaged. Not a headlight… not a knick on the front bumper. Nothing. And… I thought they would total it out… but they didn’t.

So… sometimes I look at the Honda Fit’s and wished I got that kinda mileage, but it’s a great car… it’s VERY sure footed in 4WD mode (a number of SX4 owners have commented on that), and… it has a timing CHAIN… not a timing belt. Find a trusted mechanic and ask his opinion. I prefer the chain myself.

If the price is right and you’ve had it checked out, I think you’ll be happy. Even with my bizarre accident… they had to order something from Japan. So help me I think it was something like a particular warning sticker – and NOT the hood itself – that they couldn’t find anywhere else. Took an extra couple days. Not a biggie.

P.S. - Oh yeah… and I’ve kept up all the major maintenance. Front wheel bearings finally got replaced in December of last year (they were probably the original parts), and… I did have to replace the left front axle (I forget why)… and… there’s a seal the mechanic had trouble finding the original. After trying 3x for a replacement, he found the original specs, and opted for one that was .002 inches bigger on one side (the other side was exactly the same). So… problem solved. I also finally had to have the A/C recharged last summer… first time for me… and… when you think it sat on the dealer’s lot for a while, I’d say that’s not bad. Wished the dang CD player worked. But… oh well.

I had a friend who had one, nothing unusual, do you plan on an independant inspection? It is advised.

Just the fact that this car was developed by Fiat should cause the OP to run away… fast.
Here is what this “Suzuki” looks like in Europe, where it was badged as a Fiat: 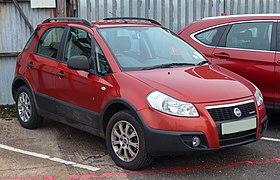 The Fiat Sedici is a mini crossover SUV (J), that was co–developed by Fiat and Suzuki, mainly for the European market. It was introduced in December 2005, at the Bologna Motor Show, and was built at the Magyar Suzuki plant in Hungary. The expected production volume was 60,000 units per year, one-third of these to be sold by Fiat, and two-thirds sold by Suzuki and badged as the SX4. The design was created by Giorgetto Giugiaro's Italdesign Giugiaro studio, and was an alternative to mini multi-pur...