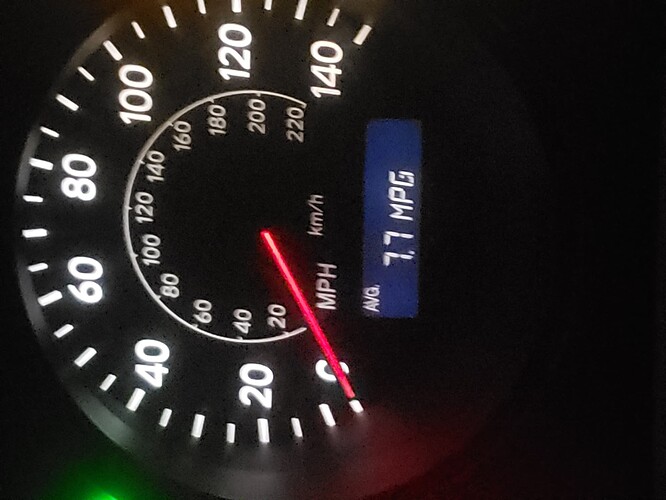 This is the average gas milage of a lexus es 300 year 2003 with 264,000 miles on it and still running great. However, with increased cost of gas i have bcom worried about gas mileage and i wonder if i can get improvement. Obd code shows p0031 and p0325 only. There is no misfire, plugs where replaced this year January. Pls help. I still want to keeps her.

Does the engine warm up quickly from a cold start. Come fully up to temp? Normally a code would be set but a bad thermostat lowers mpgs.

Dragging brakes can lower mpgs. Drive down the highway without touching brakes and coast into a rest stop with very minimal braking. Get out and touch the metal on each wheel. If any are significantly warm or hot, you have a dragging brake caused by a sticking caliper, slides, bad brake hose or master cylinder.

Are your tires properly inflated? Cheap tires? Mismatched brands? All can reduce mpgs.

A very, very worn out engine will lower mpgs as will a bad driving style.

Your other threads seem to indicate that you are not in the US by your use of Kilometers . Could you just need to change the read out to reflect Litre comsumtion by Kilometers ? Plus you said it uses oil so it may be at the end of it’s life cycle.

Erase the fault codes and road test, the first few minutes the engine performance will be normal, then when the fault sets/check engine light illuminates, you will notice reduced power.

You need to repair the knock sensor problem.

Concur it needs fixing, but I doubt the knock sensor problem would result in a fuel economy of only 7.7 mpg. My guess is there’s something wrong with the input to that calculation; i.e you are actually getting higher mpg than that. Causes: Car is either using less gasoline than it thinks, or registering fewer miles than actually driven. Suggest to calculate the mpg the normal way, number of miles between fill-ups divided by the number of gallons the fill-up required. If that calculation says really low mpg number as well, then drive a known distance (calculated from a map say, or from highway 1 mile interval posts), and see if the car’s odometer agrees with the distance.

Have you manually calculated the gas mileage? The readout may not be accurate

I just checked one of the other threads by this person . They are in Nigeria which fuel seems to be sold by the Litre . Also they ran this thing without a thermostat and had other problems . Me thinks this Lexus is just worn out .

This car should not be driven any further in limp mode, the fuel economy will not improve.

There is a description of the poor performance in this thread;

Last month I drove a customer’s Lexus with P0325 fault, even with a V-8 engine the car was barely drivable.

It is NOT “still running great” if you are getting that kind of gas mileage.

It is NOT “still running great” if you are getting that kind of gas mileage.

Things are a bit different in much of Africa. Heard a story of a guy who was selling a car with no functioning brakes. He was showing how it worked fine with his method that involved, but not necessarily limited to, putting it in reverse to stop.

In another post he said 12 MPG city 17 MPG highway which is about right for a bad knock sensor. He said he ordered the new one, but maybe it takes a long time to arrive or there is another problem such as a wiring harness.

There could be a problem with the speedometer which is causing the fuel econonmy to report very low. He said that the tachometer was acting up in the earlier post.

The oil usage were leaks from seals and have been taken care of. The seals were replaced and that solved it.

Great points raised. Thank you. I will check this

Things are a bit different in much of Africa. Heard a story of a guy who was selling a car with no functioning brakes. He was showing how it worked fine with his method that involved, but not necessarily limited to, putting it in reverse to stop.

TV news report showed a man in Africa who had “invented” how to weld metals together, no special & expensive equipment needed. The report didn’t explain the details how he did it, but involved using mains electricity for power, thick cables, and a plastic bucket filled w/salt water. For shielding, he’d stand behind a piece of plywood. Don’t try this at home!! … lol …

You can string a few car batteries together and use jumper cables to weld in a pinch.

Don’t the Desert Racers, (Baja, Dakaar) actually use the alternator on their trucks to do emergency welding if needed? I think I read that somewhere, but it was years ago.

Don’t the Desert Racers, (Baja, Dakaar) actually use the alternator on their trucks to do emergency welding if needed?

Did they use 24 Volt systems? An alternator putting out 14 Volts won’t maintain an arc with a stick welding rod. A welder puts out up to 70 Volts to maintain the arc.

If the joint gets hot enough no arc needed. Spot welding for example.