I’ve had it for years but when I moved to Florida the roof started rusting out uncontrollably. I tried everything, nothing stops it. Rust is severe. I could possibly swap the engine & trans into another van with a better body but 95 is funny year for engine electrical - I’ve seen many van engine swaps which have failed because of this - plus this is not a typical engine swap - entire nose cone must be removed, intake manifold has to come off. etc. plus every other system on the donor body vehicle will need going through as these tend to have 200k-300k miles on them now (front end, steering, A/C etc in my van are still perfect).

I have seen a garage once lift off the entire body shell of a Ford full size van (insurance job) and that seems like it might be the ‘easiest’ solution if I can find a good rust-free donor van body and a (cough) CRANE. Has anyone ever done this?

Even replacing the roof with a fiberglass top (good luck finding one now plus they aren’t cheap) won’t work because rust is down into the pillars and front windshield all along the top.

P.S. - Me-thinks this would be an excellent opportunity to replace the bad fuel sending unit assembly in the fuel tank and maybe create / install an ‘access door’ in the van floor over that area to deal with that recurrent issue in future.

What I would do with a vehicle this old is, treat the rust.

Apply a primer to the roof, and wrap the roof with a color that matches the vehicle. 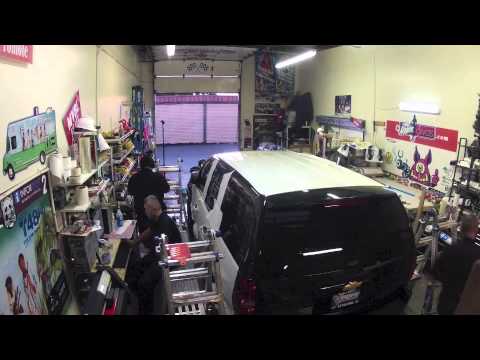 A self etching primer is best for rust due to high zinc content.Sand it,prime it and put a wrap Tester talked about.

Let me try again to explain how severe the rust is: There are several rust holes the size of softballs in the roof. The metal is rusting from inside out under the paint. The metal is also very soft and flexes, so bondo or fiberglass just keep breaking apart. I have literally flex taped the roof going over the holes and layers of silicone caulk everywhere. It still leaks badly when it rains in spite of my best efforts. The entire top of the front windshield track is compromised and water pours down the inside of the windshield when it rains. I have painted the exterior several times over the years with rustoluem white and a foam roller and brush after using ospho and a wire brush (ospho did nothing it seems) (I mentioned I’m not rich, right?) so I have made every effort I could to stop the rust. That is NOT going to happen. We are way past that. The rust is down into the window pillars (all of them) and there is no drip rail left in may places. The entire lower section of the vehicle is 100% rust free. I will try to upload some pics (I did not know I could do that )

Honestly I NEVER in a milion years would have considered a vinyl wrap - will a wrap really work over holes the size of softballs?? What should I use as a base underneath? Is the vinyl wrap tough enough to handle the sharp edges from the disintegrated drip rail? Can the wrap do anything about / come forward enough to handle the compromised windshield seam along the top? Can it actually overlap and cover the top part of the windshield itself somehow? if so, can the wrap be drawn tight enough against the windshield for water to not be driven under the wrap while driving in the rain at speed? I’m saying all this a little toungue-in-cheek because I can’t see this addressing all these issues - but I don’t know much about vinyl wraps - and i am running out of affordable options.

One thing you may need to consider. If the body has as much rust as you describe, is it still safe to drive? Like in a collision or rollover?

Even if you somehow “repair” the rust… it’ll never be as structurally sound as when new. Just a thought.

It’d be cheaper to replace it with another van.

Well, yes, I 100% agree that the van is currently unsafe in a roll-over,
and that starting over with a newer, better van would be great.
Please feel free to write me a check. But in reality, I’d have to do a go-fund-me or something to replace the vehicle with something that won’t need $3k of work.

i DO understand that continuing temporary ‘fixes’ is potentially unsafe but I am ‘poor’ and cannot afford to replace the vehicle.

That said, replacing the entire body shell with one that is not rusted is the solution I feel is best and safest if I can figure out how to do it and avoid pitfalls. I’d appreciate it if we can talk about this and would like to hear from anyone who has done / attempted a body shell swap on a van (or other vehicle).

More details on the current condition of the roof re: safety concerns: the roof sheet metal is bad yes. The interior roof support braces running from side-to-side are still intact. I have a fairly substantial (new) steel driver partition behind the front seats. I’ve done what I can to try and preserve body integrity. I simply cannot afford a new (or used) van that has equivilent low mileage and/or is in good mechanical shape.

“Does anyone have experience with replacing the entire body shell, lifting the old one off the chassis at the mounts and replacing it with a good one”. ?

The B series vans have a unitized construction, the frame channels are welded to the body; “unibody”.

I thought it was a body on frame! Seriously it is a unibody??? I did not know this. if that is the case then what I wish to do is simply not possible.

Wow. You are absolutely correct!

—> "the B-van was a unibody design, reinforced by two full-length open U-channels welded to the floorpan. It shared numerous components with Dodge trucks, but never used a true frame. “Like most unibody vehicles, it had a separate bolt-on front K-member to carry the front suspension, steering, and engine.”

i had no idea.

Well - it’s game over. No hope of doing a ‘body-shell’ swap.

Thank you all for playing.

I guess I’ll just put some flex-paste and flex-seal on the roof and drive it until it disintegrates.

and then rebuild everything else. (sigh)

well, at least now I know.

Well - it’s game over. No hope of doing a ‘body-shell’ swap.

You could still do the separate bolt-on front K-member to carry the front suspension, steering, and engine.”

But no matter which way you go, it won’t be cheap.

Learn to weld and form sheet metal. It will end up being cheaper in the long run. If you have to pay a fabricator, it will be more expensive. Let that guide you.