I have 5-speed manual transmission '92 mazda protege. When I drive on the highway at about 65mph the rpm is about 3500 in 5th gear. Is this normal, or is there something I could do about this?

I don’t know the gear ratios on this car but it’s probably normal. If you have not had the car long it can seem very high depending on what you were driving before. It’s perception.
Smaller, low powered 4 cylinder engines have very narrow power bands and they’re designed to run at higher RPMs. Running at lower RPMs would make them totally gutless power-wise.

The RPM is about right for that type of car. If you have owned a big-engined car before, you will have to get used to the additional engine whine. When you go up a long highway incline, such as in New England or driving into the Rocky Mountains, please shift down to 4th gear, since the engine will be working very hard in 5th gear. Your RPM will be around 4000 or so but it’s better for the engine than lugging it. These small engines are happiet at higher RPM.

That seems too high to me. Both of my 4-cylinder cars run at less than 3500 RPM at 75 mph. How long have you had this car? Have the RPMs always been this high, or is this something new? I have to wonder, based on the age of the car, if you clutch might be slipping. How many miles on this car?

I just purchased a 92 Mazda protege with a manual tranny myself and I have owed close to 10 4cylinders from my first car and I’m telling you right now this car revs up wayyy to high in 5th gear. I was honestly thinking someone had replaced something on it with the ring part. So it’s nothing I can to that’s not pricey to change that?? I literally won’t take it on the interstate any more from fear of it throwing a rod.

I literally won’t take it on the interstate any more from fear of it throwing a rod.

You can’t be serious .

Sounds just like my '83 GTI, short gears, loved to rev. No harm done. 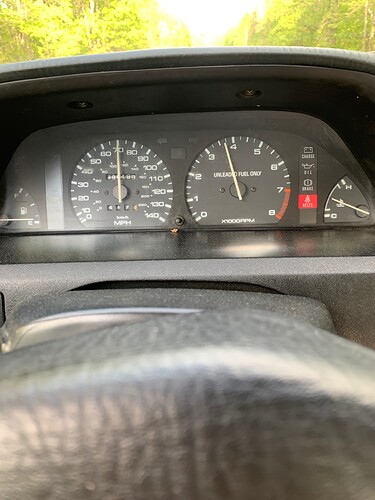 You’re only halfway to redline, it will run like that all day.

Seems that running around 4000 RPM at highway speeds over the past 30 years and 300k miles seems to have had no ill effects. It’s almost like it was designed to operate that way.

From the redline and the dash it looks like you have the LX with the DOHC version of the 1.8. We had a '90 Protoge SE (SOHC 5spd) without any tachometer that was shifted by ear for the almost 200,000mi we had the car. 4,000rpm is where this engine makes the most torque and is well below the redline for this engine.

Alright well we see. I think the little hole in the exhaust or whatever is making it seem worse that it really is.

Another question . The seat belts don’t slide forward when you open the door or at all (passenger side does sometimes) I see its a recall issue so I called a dealership and was told that they have discontinued that part so they can’t fix it. Can anyone tell me what’s a cheap way to fix that JY swap? If that’s the case how big a pain is it to remove and replace the rail and motor?

It should be possible to see if the clutch is slipping by putting your foot to the floor and releasing it while driving on the highway. The tachometer shouldn’t move any more than the speedometer.

Could it be that your tachometer is a little out of adjustment?

I think you would have to modify the transmission to change this. Maybe bring 5th gear down to 0.55:1. Or change another gear. Which gear is most easily skipped?

I think you would have to modify the transmission to change this. Maybe bring 5th gear down to 0.55:1. Or change another gear. Which gear is most easily skipped?

Who are you replying to , the person who started this thread in 2007 or the person who drug it up from the dead . The revival person has a junk vehicle that is almost worthless so I doubt if the expense of transmission work is a good idea.

The revival person has a junk vehicle that is almost worthless so I doubt if the expense of transmission work is a good idea.

The thought of spending big bucks for transmission repair on a car worth less than $1k seems like a losing proposition.

I didn’t realize it was revived. But it apparently it is factory set to rev high at 70MPH. A lawnmower runs at 3600 RPM and it doesn’t throw a rod.