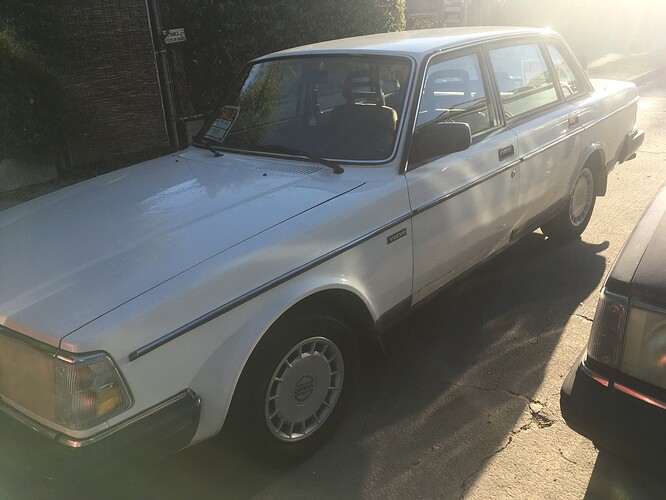 I really can’t see that anyone can make that decision for you . You like those old Volvos and it is your money . After seeing and driving it I might even think that price is acceptable. As for problems , who knows , not even your local fortune teller can answer that.

You couldn’t pay me to take away an expensive to own/maintain/repair luxury European vehicle that’s also 33! years old. Finding parts could be an issue, the safety equipment while state of the art at the time is nothing compared to a car that’s even just 10-15 years newer. If you insist on purchasing this thing, pay your mechanic to do a prepurchase inspection on it before you buy it. I personally think that $2,000 dollars is nuts for a 33 year old car with almost 200k on the odometer for a car that isn’t a classic or special.

You’d want your volvo mechanic to go over the car for you and give an idea of what shape it’s really in but it appears to be a decent car from the picture. Someone that works on these would be able to give you a better idea of what to look out for than I could. These do have a certain following among Volvo fans though.

And part of the inspection needs to be an engine compression test. You’ll want to know if you’re going to have to rebuild/replace the engine.

If you really like it, buy it. My daughters drove a '90 sedan and a '91 wagon through high school and college. Both stick shifts. I sold them a decade ago for $1500 and $2000 respectively, and they both had more than 180k miles. When I sold them, you could still go to a Volvo specialty junk yard and get any part you needed for a 240. Now junkyards no longer keep 240s in the yard, so I would be a little shy about owning them. Anything that passes California SMOG is probably worth $1500, but I would not go much higher than that even if I really liked the car. I doubt that buyers are lining up for this.

Make sure the inspection includes a thorough rust check, especially underneath. The car may have spent much of its life near the ocean, and that’s an issue. I met a guy in the early 1990s near Santa Barbara with a cherry late 1960s Mustang. I remarked how Cali cars had so little rust. He said that wasn’t true, and that he bought his while he lived in West Texas. That doesn’t mean this Volvo has a rust problem but it’s worth checking carefully. If it spent its life near Ontario, that fits the desert life criterion.

I am going to go against the grain here. This is not a car that someone will buy because they want a cheap “commuter car” to drive to work. This is a car that someone will buy because they like the styling and rarity of this historic vehicle. If that someone is you, and the interior is in decent condition, I say buy it. These were very common cars 20 years ago, and now they have become rare. This is priced reasonably, i.e. the seller isn’t trying to charge a “nostalgia tax” of thousands of dollars.

+1
Having had the misfortune to have bought a '74 Volvo, I can attest to the fact that the gas mileage would be considered rather poor in comparison with a modern vehicle. My Volvo–which was maintained better than the mfr specified–maxed out at 25 mpg on the highway. And, the ongoing repair costs were… considerable.

These were very common cars 20 years ago, and now they have become rare.

Yup!
I dumped mine as soon as I was financially able to do so, and I suspect that a lot of them wound up in junk yards after their second or third owner was bankrupted by the repair costs.

Why not buy it? You’re probably on a first name basis with your Volvo mechanic already, and Ivy League educations for his children won’t come free.

She’s in LA. USC, Cal Tech, and Stanford are more like it.

It’s an aged used car. As to whether it will be any good or not; flip a coin.

I will say this after working on a few of those back in the day. Valve lash is something that is quite often overlooked or ignored and the last thing you want to do is expensive cylinder head work due to that oversight.
Agreed with texases that a compression test is a mandatory step and valve lash a necessity even if compression shows to be good.

I remember a 130k miles 240 which ran fine except for a stumble at idle. Compression showed a few cylinders with an abnormal drop. Checking the valve lash showed tight exhaust valves on those 2 cylinders and adjusting the lash accomplished nothing as the damage was already done.

If compression is good and seeing as how you like Volvos then I don’t have a problem with owning a second one. For 2 a paltry 2 grand it’s not like you are breaking the bank. It’s a better option than spending 30 grand on a new car and losing 20 grand in depreciation within a few years; and the Volvo is comparatively simple to maintain.