I found this on another site…

I stumbled across this story and posted it in the hopes it can help just one AWD owner.

Garage Horror Stories: Fixing your AWD Cadillac with a $22 resistor

This installment is actually about averting mechanical horror – and a huge repair bill – via a simple electronic part and some tinkering by JUSTIN PRITCHARD | OCTOBER 1, 2020

Cars are machines built of parts, components, and electronics that will eventually wear out, wear down, and fail, sometimes causing headaches for their owners in the process. As someone who’s owned a fair share of cars, a good friend of mine we’ll call “Dave” is very familiar with this fact.

But as a long-time tinkerer of motorized things – and as builder of what was, in its day, about the fastest all-motor Pontiac Sunfire going, as an enthusiast currently rocking an E39 BMW M5, and as someone who loves few things more than wrenching – Dave’s also familiar with workarounds to avoid those headaches. So when Dave experienced a recent problem with the all-wheel-drive (AWD) system in his 2012 Cadillac CTS wagon, he didn’t see a headache, but a learning opportunity.

One night, Dave reported his low-mileage CTS Wagon’s AWD system was binding on bare pavement at low speeds — almost like a truck that’s been left in four-wheel-drive. It’s an unpleasant sensation, and it was showing up whenever this CTS was turning sharply at a low speed, like when pulling out of a driveway or maneuvering around a parking lot.

It sounds like a minor annoyance, but it’s the kind of problem that can actually damage power steering racks and driveshafts if left unattended. It’s also the kind of problem that’s happened to enough owners of AWD-equipped CTS models – let’s call it some, but not most – that it’s been repeatedly identified and documented by the online owners’ community. In some cases, owners’ communities for various makes and models can do some excellent detective work, and a knowledge base is created.

That’s what led Dave to a surprising fix for his AWD system’s very obvious trouble.

See, there are a lot of different things that can make an AWD system act wonky. Some are mechanical in nature, like a problem with the system hardware itself. Others, however, may be electronic in nature, and these are often much easier (and less expensive) to fix.

Inside the CTS’s AWD system (and many like it) are clutches that engage to control how much power goes to the front wheels and how much goes to the rear, a ratio adjusted in real time. This is controlled via electrical signals sent to the clutches, which makes them squeeze or release as required.
Low-speed binding, as experienced in this particular CTS wagon, is a good sign something has gone wrong with those signals.

When an AWD transfer case is built, its manufacturer needs to know precisely how the clutches inside will respond to the electrical signals they receive from the vehicle brain. To learn this, the transfer case is run through a test before it’s installed to the vehicle.

The results of this ‘bench test’ indicate precisely how the clutches in that specific transfer case respond to the electrical signals that control them. Because of slight manufacturing variances, some clutches need a little less of a signal to do their job, and some need a little more. So, to compensate for these slight deviations in how the clutches respond to their electrical signals, one of nine resistors is installed in each and every AWD system’s circuitry. 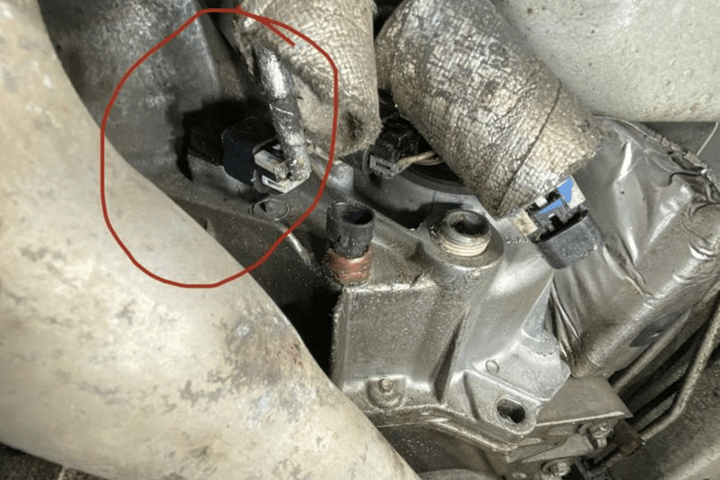 A resistor is a small, inexpensive electronic component that limits the amount of electricity that can pass through a circuit. In the case of the CTS’s AWD system, the results of the pre-installation test determine which of the nine resistors gets installed to the transfer case before it’s fitted to the car. This ensures the AWD system works as precisely as possible.

Knowing all of this, Dave did some digging around in a private Facebook group for Cadillac CTS owners.
It’s here he discovered dealers had eventually started replacing resistors as a fix for certain AWD system problems, like his. Specifically, the highest-resistance resistor available seemed to fix the binding problems experienced by some owners.

Dave wondered if simply swapping a resistor might be the fix to his problem — rather than a much pricier replacement transfer case, like other dealers had resorted to as a remedy.
So he gave it a try. Dave ordered a “service resistor” – basically a one-size-fits-all piece for AWD CTSes of this vintage – took the old resistor out from the transfer case beneath the car, popped the new one in, and went out for a drive.

Problem? Solved. No more binding. Total time? About 10 minutes with proper tools and lighting in the garage. Total cost? $22 Canadian loons for the service resistor from a nearby GM dealer. If the AWD system in your car is acting funny, be sure to have a professional check it out as soon as possible. Just remember: sometimes, if you do your homework, very dramatic problems have quick and painless fixes.