Low voltage warning on Hybrid(Propulsion) battery. Dealership has had car over a week and is dragging his feet to replace battery, or repair bad battery module. Fully under warranty.

Time to elevate your situation up the chain to corporate. Instructions are in your owners manual.

Many car owners – not just Prius – are having difficulties getting timely repair work done these days. Covid still causing complications, both with getting the parts, and with problems the shop manager has hiring qualified technicians to do the repairs. Many auto technicians have quit their jobs, either to exit the field completely, or to find a better paying position at another shop.

I expect you’ve already noticed this, but folks are pretty cranky these days. Doesn’t take much to set them off. Repair technicians likely experience this in spades, don’t like having to face cranky customers day after day. Even me, a retired geezer, I try to avoid interaction with strangers whenever possible, in fear of runuing up against a cranky person.

OK, yet another of George’s never ending stories … lol … couple weeks ago on a bicycle ride, I stopped behind another cyclist at a major intersection, both of us waiting for light to change. Problem is, the first cyclist didn’t stop over the sensor which causes the traffic lights to change. He says to me “pull up so you bike is over sensor”. I tell him he’ll have to put a mask on first. He refuses, so I refuse to pull up. Car is behind, so I say the car will trip the sensor. He says “no”, car behind won’t do it … lol … long, slow wait, worried I might get punched, but eventually light changed.

Only 1 road leaving my area to north which then goes west to shopping center and it is at county hwy stoplight. County controls light timing. Some saturdays at 10am I wait for 3-4 minutes for light to change with no traffic. Some days it changes in 20 sec. with NO cross traffic. 20 years of the light from hell.

Traffic lights can be weird. There is one I think likes me. I can be at least 1/2 mile away, it waits till I get really close with 4 or 5 cars waiting, then turns green. I can be the only car that pulls up, maybe 15 seconds later I get a green.

Maybe we should have a thread devoted to weird traffic light behavior … lol … There’s one red light here that cyclists use frequently b/c have to cross a major busy street at that light to get to the next segment of the cycling trail. But otherwise it is not used much by cars, services a pool cleaning place for the most part. The sensor works ok, triggers the green light, but even if I take off immediately on first sight of the green light, and pedal like crazy, doesn’t allow enough time to make it across the street before it turns red again. Before this summer it was simply impossible to get to the other side and out of the way of cross traffic before it turned red. Usually turned red about halfway across. Had to veer to dodge approaching cars on a frequent basis.

I stopped by that city’s cycling office mid-summer and asked if they could re-program the light. “We’ll look into it” they said. Sure enough, two weeks later, I noticed some time was added. But it was something like 1-2 seconds longer … lol … at least I can make it across the street 3/4 of the way before it turns red now.

Yup, traffic lights can be very annoying. Some intersections have the blinking amber left turn lights, others that should have them do not. Frustrating to be at a red left turn arrow with no traffic in sight. I know most of them so with take the through lane then make a u-turn. We even have some roads with dedicated u-turn area. FDOT has some weird (IMO) ideas.

Dragging his feet? The car has only been there a week. Dealerships, like any other business nowadays, are having staffing and supply issues. If we assume that your car was diagnosed the first day it was there, since it’s a major repair under warranty, the case would have been sent to a regional field engineer (or some such) to inspect and confirm diagnosis and then order in repair parts. That could take several days. Then parts arrival will take more time, then scheduling in and actually performing the repair will take several more.

A week is not a long time for a major repair under warranty at a dealership.

You are probably correct with this assumption. The only update my daughter has received, it’s her car, is the service advisor has referred the problem to the service manager.

I was hoping someone on the forum might know of the method that Toyota would diagnose a faulty hybrid (propulsion) battery. I’ve found an app that pinpoints the exact bad cell or cells that are defective in the Prius hybrid system and plan to inform the service manager when I talk to him tomorrow.

The car is a 2019 with 56K miles and has been serviced by the same dealership at every service interval, since it was purchased there.

I was hoping there was a TSB out about this problem, or somebody on the forum had run into this issue.

I plan to escalate to the Toyota Regional Office, unless the Service Manager has a solution. I have been out of town or we would have done this earlier.

I was hoping someone on the forum might know of the method that Toyota would diagnose a faulty hybrid (propulsion) battery.

There is a diagnostic procedure for each fault code listed in the hybrid control computer.

I’ve found an app that pinpoints the exact bad cell or cells that are defective in the Prius hybrid system and plan to inform the service manager when I talk to him tomorrow.

The technician has no use for that. If there is an internal HV battery failure, the HV battery will be replaced. The technician will not open the battery, it will be sent to Toyota’s repair center as a core. 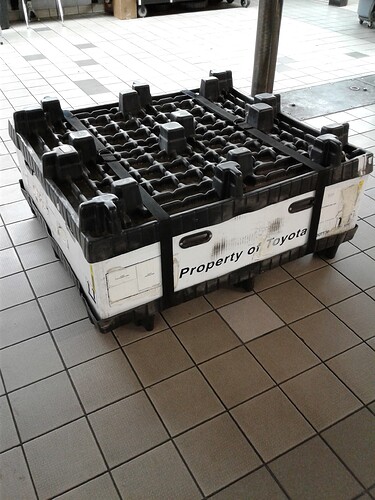 That is great news. There is no reason that this Toyota dealership would not have performed the diagnostic tests required to ascertain the cause of the “low voltage” indicator and trouble code that was displayed.

I’m sure they don’t want to do a hybrid battery replacement, but the warranty is what it is.

It should be an interesting conversation with the Service Manager tomorrow.

Thank you for explaining what Toyota does in this case.

In a hurry? We had a customer’s 2022 Lexus parked for more than a month while waiting for a hydraulic suspension part from Japan.

I’m sure they don’t want to do a hybrid battery replacement, but the warranty is what it is.

It should be an interesting conversation with the Service Manager tomorrow.

Why wouldn’t they want to fix the car? Let us know if the Service Manager tells you anything that hasn’t been discussed here.

I recently was involved in a case where a car under warranty was at the dealer for 72 consecutive days for repair. And here a poster is complaining about 1 week.