I have a 2013 Kia Sorento with 56k miles on it. Recently, it has developed a whir/whistle noise that is correlated with acceleration.

Opening the hood, it sounds like its coming from the drive belt (I think its the drive belt. I haven’t found a good diagram yet). The manual states to start checking belts at 60k miles so it might fit…

Anyways, the belt itself doesn’t appear to have any cracks and as far as I can tell, which isn’t saying much, the tension looks ok.

Big question is I’m about to start on my drive from GA back to MD and need to know if this is something that needs to be fixed sooner rather than later. What is the worst case scenario (it breaks during the drive) ?

If you can spray water on the belt and the noise goes away temporarily, throw a new belt on it.

Ok, using a wrench placed on belt tensioner pulley bolt(highlighted in yellow below), rotate tensioner counter clockwise to release tension on belt and remove the belt 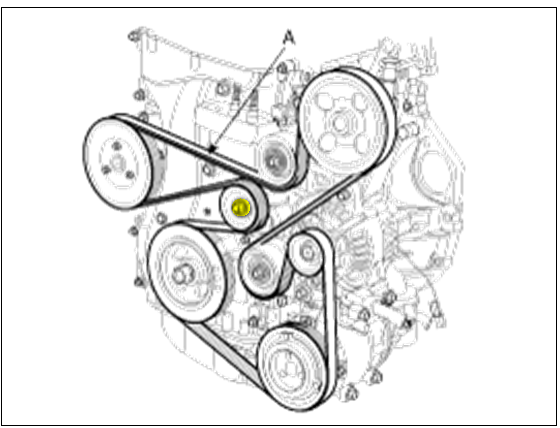 to install new belt, route around all pulleys except the tensioner pulley. use wrench to rotate tensioner counter clockwise and then slip belt around the pulley and release tension.

Alright, so the sound went away and now my AC is not working?

So you put a new belt on?

This may have been where the noise was coming from…the AC compressor.

Loosen the belt again and try to spin every pulley that the belt rides on and wiggle the pulley too.
Any sloppy pulley will indicate a bad bearing in that item it’s attached to and the same if there is any grinding or rubbing sounds. The only pulley that you will not be able to move is the crankshaft pulley…all others should spin freely.

“Alright, so the sound went away and now my AC is not working?”

Insightful asked my first question, “So you put a new belt on?”

I see that Kia published a 3 page TSB (Technical Service Bulletin) to help their technicians diagnose and remedy problems in 2011 -2013 Sorentos (and some Optimas) involving A/C Evaporator Freeze-Up During Extended Drive in locations of both high heat and humidity.

Did the A/C start working again after it had time to thaw out?

Thanks for the replies. I did not get a chance to change the belt.

Cars heal themselves, right?! Sound went away and I assumed all is well (rolls eyes). Then noticed the AC issue.

I saw that TSB and sadly it hasn’t started working after it had time to thaw. AC is still dead.

Can you tell if the AC compressor clutch is engaging?

If the sound comes back, sometimes you can listen through a short piece of garden hose to isolate where exactly the sound is coming from.