Hi - We have a 2012 Volvo s60 that we took to a repair shop. They diagnosed a faulty fuel pump and did some regular maintenance like belts and break pads all to the tune of over $2k. A few days later the car starts making noise and they say the engine is blown because of the tensioner. They never mentioned the tensioner when they were making their repairs or we would have replaced it. Now they are saying it’s $3k for a new engine. They also say it’s not their fault because the tensioner was not making noise and they followed Volvo specifications. Any thoughts? Thanks!

If it was the serpentine belt tensioner that failed, there are ways to determine if it should be replaced.

The receipt says they replaced two drive belts. They said one of the ones they replaced broke so not sure which tensioner failed. I wish there was a way to add a video here. We have one. Thanks!

Click on the icon above with arrow pointing up.

Upload the file that contains the video.

Proving that the shop did anything to cause this might be impossible . Also that 3000.00 engine must be a used engine or the 3000.00 does not include labor for a rebuild. You really need to ask them more questions . Of course you could spend the money to have the vehicle towed to another shop but that will have a dianostic fee and may still have the same result.

Why do you say it would be impossible to prove? Doesn’t a shop have some liability when an engine blows two days after they have done a complete check on it and we paid $2k?

Why do you say it would be impossible to prove? Doesn’t a shop have some liability when an engine blows two days after they have done a complete check on it and we paid $2k?

The legal system is all about proving your complaint. In the instance of a civil case–like yours–the standard that you must meet is that you must “prove” your claim By a preponderance of the evidence. *

Even though the catastrophic damage to your engine took place two days after the car was serviced, you will have to convince the judge that the shop was to blame, because it is extremely unlikely that you could get a jury trial. **

I think you need a 2nd opinion

Some noises aren’t in fact the engine, but other things, such as accessories, flex plate, etc.

It’s hard to understand how a failed serpentine belt tensioner could “blow the engine” unless it overheated b/c the water pump wasn’t working. Did the car overheat, dashboard warning lights, lots of steam coming from the engine compartment just before the engine stopped running?

It’s hard to understand how a failed serpentine belt tensioner could “blow the engine” unless it overheated b/c the water pump wasn’t working.

On most cars, this is correct. However, certain Volvo engines have a known design flaw in which the accessory belt can come apart and be drawn under the timing belt cover, causing the timing belt to fail, and the interference engine to be damaged. If this car is equipped with the 5-cylinder engine, it most certainly uses a timing belt, and most certainly suffers from this defect.

Do you have their new assessment in writing? Tell them you need an itemized estimate of the work that needs to be done for you to spend another $3000. Once you have it, share it with us and we will help you interpret it.

Also, which engine do you have? The 3L V6 has timing chains and the 2.5L 5-cyl has a timing belt. If you have the 2.5L, it’s an interference engine and there could be valve damage when the timing belt failed. There may also be piston and cylinder damage depending on how bad the valve failure is. This assumes that the evaluation of this new problem by the shop is correct. Post your written evaluation and then maybe get a second opinion. A second opinion should mean that you have the car towed to another shop.

This is just my personal opinion

It’s a 5 cylinder. I should have the written assessment today and will post. Trying to determine if this is even worth repairing. Thank you 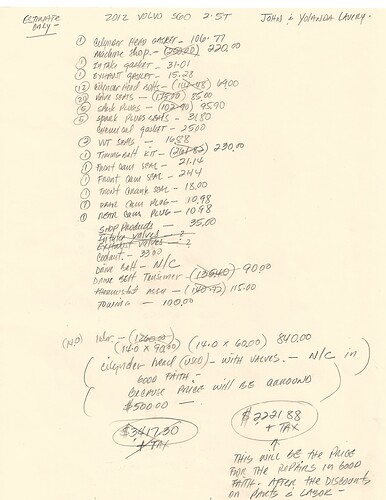 This is what they are telling us the repairs will. E after we have already spend $2k!!

This parts list/estimate suggests that the engine overheated damaging the cylinder head. It seems the vehicle was driven for a distance with the drive belt off causing the engine to overheat, who was driving? 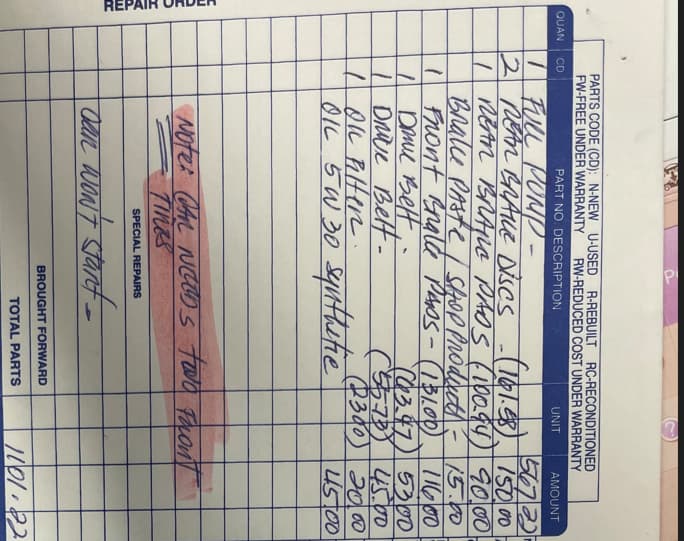 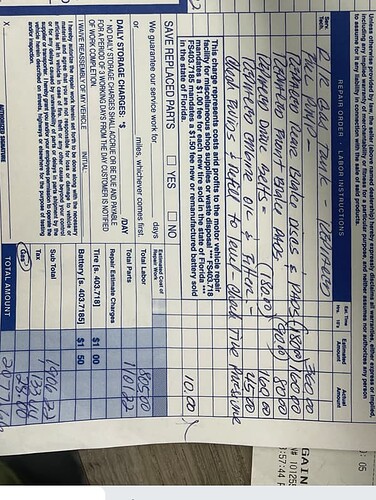 They are saying it was a tensioner issue and totally unrelated to the work they initially did. As such, they are saying they have no liability,