Took my 2012 V6 Mustang to the shop to lube my front caliper… They alerted me to some major leakage in my rear passenger brake…
I try to fix everything myself (even though I have no idea what I’m doing) so I started going down the list, checking for loose bolts, broken lines etc… I had one loose bolt which I thought was where the leak was coming from since there was a lot of oil around there… But it wasn’t that, my wheel was covered in oil after only 1 hour of driving…

It’s hard to tell where the oil is coming from since everything is covered in it…I have no problems braking when driving at the moment though I don’t drive daily since I work at home which is probably why my brake fluid levels have barely gone down… All hoses/lines appear fine, no loose bolts… Any ideas?

NOTE: There is no oil on any other part of the car, it is isolated to the brakes, inside fender and wheels… My fenders are very flared so no brake fluid has touched the paint 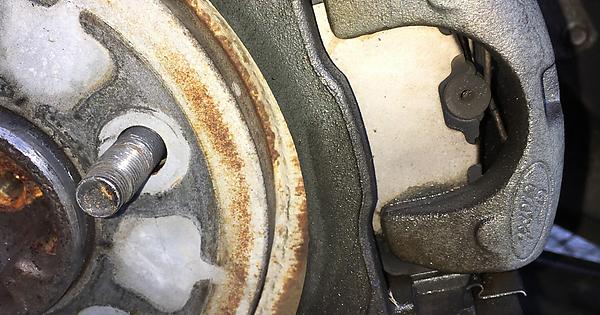 With all due respect, when it comes to the most important safety system on your car, you need to have a professional diagnose and repair the leak in the brake hydraulic system. Please do not drive this car until the leak is repaired.

I suspect the caliper is leaking at the piston seal.You need to remove the pads to check that.Have it towed to an independant mechanic shop ASAP.

I too agree with Corollaguy1. The pictures do seem to point to a leaking piston seal.

The caliper either needs to be replaced (preferred) or rebuilt.

The brake pads are likely soaked in brake fluid. I would replace them.

Given you have the other half of your braking system and given you say the brake fluid level barely dropped, then if you feel the car stops for you, I would say it’s OK to drive carefully to a shop to get it fixed.

I would say it’s OK to drive carefully to a shop to get it fixed.

+1
Yes, a slow and careful drive to the shop–and nowhere else–to get it fixed.

I agree with the others… you need to replace that caliper. And +1 to @VDCdriver… if you don’t know what you are doing, you need to let a mechanic fix this because…

There are 2 tricky things about replacing a caliper on this car. 1) Rotating the piston to compress it enough to install new pads requires a special tool and 2) Bleeding brakes is tricky. Not especially tricky on this car but still tricky.

Looks like gear oil from the rear axle, the axle seal is leaking.

If that’s oil, like you describe, you have a blown axle seal. You will need new brake pads and brake shoes because they are contaminated with oil, but to fix the leak you also need to remove the axle and replace the axle seal. Since the rear diff has to be opened up to do that and brake parts are sold in pairs I would replace both axle seals at the same time.

Based on the last two replies, I’m changing my opinion to it’s more likely gear oil. Still a chance it could be brake fluid, but unless one smells it and rubs it between their fingers, it’s difficult to tell from only pictures.