can s.o. identify the parts?
are they part of the engine splash shield?

is it essential to replace it?

what $ range for a repair? 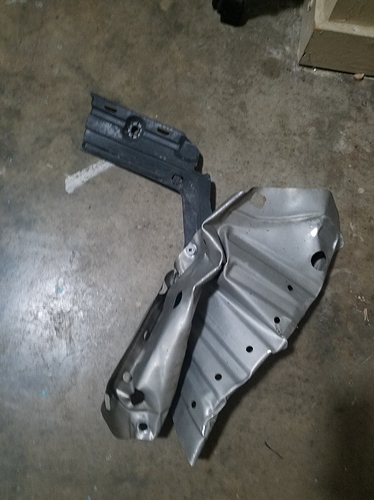 what $ range for a repair?

Who knows ? It all depends on what unseen damage is so your friend should get an estimate from a body shop.
A 2011 vehicle should have full coverage insurance so use it.

yes, who knows?
let’s assume there is no other damage, just replacement of damaged pieces?
maybe s.o. has had a similar experience?
insurance: there is always a deductible to consider

I can’t say for sure, but they do look like the various splash shields/covers. I’ve never had to replace this stuff so I don’t know the cost.

I agree with @VOLVO_V70. Recommend to get it inspected and repairs estimated and figure out where to go from there. If this stuff was damaged, there may be other damage on stuff that is a much bigger problem. And the cost of repair is really needed to determine where he goes from here.

I don’t know that these shields are essential. My guess is they’re there to aid in aerodynamics a little and provide some protection of the underneath stuff - kind of what they just did. If it was me, I’d be keeping the car for 5 or 10 more years and would attempt to repair.

The car maker put those parts on for a reason. If this were my car I would replace the parts. As others have said, crawl under to see what other damage may have occured. There may be other parts that were ripped off that were left behind. This is an awful year for pot holes and road damage causing damage to cars. Local road crews are putting cold patch down when there is a break in the weather, but it does not last long. I forsee a lot of road work for permanent repairs this spring.

the roads, no matter if I, HW or county roads in my area are all in miserable conditions,
plus stuff unsecured or badly tied up flying of the trucks- it’s tough driving

I know because we have several Honda Civics in our fleet, and my mom has a 2014.

The parts most likely did their job and protected the engine, front suspension and steering

I’d crawl under there and have a good look. If everything else is fine, replace the splash shields and move on. You’ll probably also need to replace the hardware.

I’d say it is essential to replace it . . . if you just remove it and don’t replace, then that next big rock might just damage those other components I mentioned above

I’d guess between $100 - $200 for the parts and hardware, if you buy from your local Honda dealer. They’ll be able to show you an exploded view on the screen, which makes it easier for you to tell them what you need.

Really $100-$200? I was guessing (and that’s all it is, a guess) they’d be a little more, just because the custom nature of the parts. Although this is a popular car and maybe economies of scale will kick in.

Those parts would be available and affordable at an auto recycler, especially on a DIY basis.

I was thinking dealership pricing, but that’s a good point. If the dealership prices are steep, it’d be worth doing a little calling around the auto recyclers (don’t call 'em junkyards).

What you did was pretty strange . . . usually people are telling me my estimates are too high

I guess life has wore me out with what something actually costs compared with what I think it should cost.

I personally think my first estimate is more accurate . . . just a gut feeling