Good Day Everyone!
This is my first post on this forum so I apologize if I’m posting this in the wrong section or something of that sort.
I was driving home last night when the Check Engine Light, Cruise Control, Parking Brake, and Vehicle Dynamic Control warnings came on suddenly. The car is functional and starts just fine. 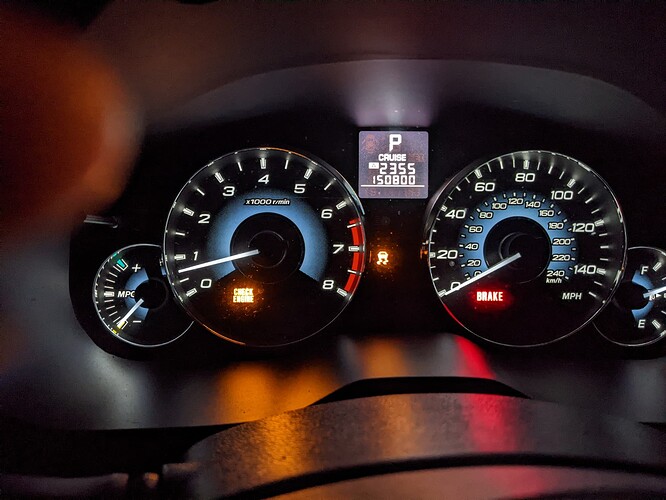 The Check Engine Light and Vehicle Dynamic Control Lights are solid. The Parking brake and Cruise Control lights are blinking. I took it to AutoZone this morning to get the codes and read and the following codes came back:

As far as possible issues / symptoms: I believe one of the wheel bearings needs to be replaced. I have heard a cyclical humming noise from the car that increases in frequency as I accelerate. My fuel economy has also decreased over the past 3 months from an average of 26.7mpg to 25.2mpg. This could be due to driving habits. I have recently topped off my tires as I thought that was the issue.

If anyone has had a similar issue, or has experience with these problems please let me know.

Two weeks ago I bought a new 2012 Outback. While driving in the manual auto mode, the cruise started flashing, the check engine came on, the traction control light came on and the brake light was on. The dealer said it was because I did not tighten the gas cap, letting air in. They reset it but a few days later it came back on again and this time they said it was miss fire code. Since they couldn’t figure out the issue, they did the right thing and traded it in for another, identical 2012 Outback. Now, 8 days later, all the same lights have come on. Anyone experience any of these issues before? Any suggestions on what to do? Thanks.

You apparently have a 4-cylinder “Partial Zero Emissions” model.
On this particular model, if the OBD system detects a problem with the Evaporative Emissions System, all of the warning lights that you mentioned will light up, and the traction control will be disabled.

I suggest that you print this information, and show it to the service manager–NOT to the “service writer” at the desk.

In most cases P2096; Post catalyst fuel trim too lean is caused by a failing bank 1 downstream oxygen sensor.

Sounds like to the dealer for a new gas cap and maybe O2 sensor. Shotgun approach but not all that expensive.

The problem might be simply the problematic wheel speed sensor. That’s probably used by the braking system, and when the braking system isn’t working correctly the VDC and Cruise control functions aren’t allowed to operate. Suggest to focus your shop on getting that problem corrected first. The wheel speed sensor is probably part of the wheel bearing ass’y, and it sounds like the bearing may have to be replaced anyway.

The power supply low and engine system codes might be the same problem. First step, ask your shop do a standard battery/alternator voltage test. If those test ok, you’ll probably need some auto-electric tech-help expertise to figure out what the problem is. Have you had any work done involving the engine compartment lately? If so, that’s the first suspect for this sort of problem.

The too-lean fuel trim problem is probably the last priority. As mentioned above, that could just be a failing O2 sensor or its connector, and unlikely related to the rest of the problems.

+1
Subarus–by design–will illuminate EVERY warning light if the CEL is activated. This is apparently because all too many people will blithely drive along for weeks, months, or maybe even years with a lit-up CEL (thinking that it is something “normal”), but they will likely be more concerned if every light on the instrument panel starts glowing.

The bottom line is that the OP needs to find out what sort of engine or emissions problem caused the CEL to go on, and when that problem is remedied, all of the warning lights will self-extinguish.

One of the codes indicates low voltage in one system. It wouldn’t hurt to check battery voltage while the motor is running.

It wouldn’t hurt to check battery voltage while the motor is running.

Would you not be getting the alternator output while the engine is running?

It wouldn’t hurt to check battery voltage while the motor is running.

A common ABS fault, it indicates the battery voltage was low at one time, could have been a year ago when listening to the radio with the engine off.

Focus on the PCM exhaust fault.

You should replace both rear hubs at the same time, they usually go out within a short period of time together. The extra friction would also reduce your fuel economy.

You may have other issues but this should be top priority. BTW, rear wheel bearings on Subarus are notorious for wearing out early.